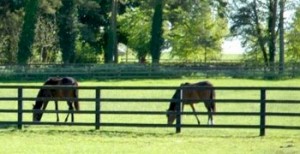 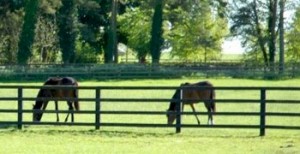 If Ireland is the home of the horse, then Kildare is home to the horse in Ireland – this small town is steeped in matters equine, with numerous racing stables and stud farms and several racecourses in the general area.

Many local buildings are named in honour of St Brigid, an early Christian saint whose story is mainly the stuff of legends which blur with tales told about the pre-Christian Goddess Brigid.

According to one of these stories Kildare was founded when St Brigid, seeking land on which to build a monastery, persuaded the local King to give her what land could be covered by her cloak. When she spread this garment on the ground it began to grow until it covered many acres, and thus she had her land.

What to see in and around Kildare

All that remains at the site of Brigid’s once great monastery is a holy well, still believed by some to be the source of miraculous cures.

Whatever the truth of its origin, there is no doubt that the towns fortune was down to the limestone soil of its surroundings, which creates near perfect conditions for the rearing of horses. A visit to the Irish National Stud, a few miles away, is a must for horse-lovers and those up to an early start can watch strings of racehorses at morning exercise on the Curragh, a flat grassy plain close to the town.

The two gardens at the stud, the Japanese Gardens and St Fiachre’s Garden are both well worth seeing also.

Another place worth a visit and not far from Kildare is the Bog of Allen Nature Centre which tells the history of peat and explains the unique flora and fauna associated with bogs – it sounds dull enough, but it isn’t. Children in particular enjoy seeing the insect eating plants at work and hearing tales of bodies perfectly preserved for thousands of years in the bog.

Kildare in the News

Have you something to add about "Kildare, Co Kildare"?