Achill, off the coast of Co Mayo, is Ireland’s largest Island and is connected to the mainland by a bridge.

The Island is steeped in history, with evidence of human settlement going back more than 4000 years.

The sea is never far away here, with long sandy beaches to stroll along, tiny deserted coves, soaring cliffs walks and everywhere pure clear Atlantic water, peaceful and shining in the sun in summer, crashing to the shore in huge waves at other times.

Dolphins and whales are frequent visitors to these waters and can often been seen from the shore.

Achill was home for 20 years to Captain Charles Boycott who famously gave his name to the English language. He lived first on Keem Bay and later at Corrymore House, on the slopes of Croaghaun.

In the early 20th century the celebrated American artist Robert Henri fell in love with Achill and spent several summers on the Island, at first renting and later buying Boycott’s House. He produced over 100 paintings there, mainly of local people and primarily of children. 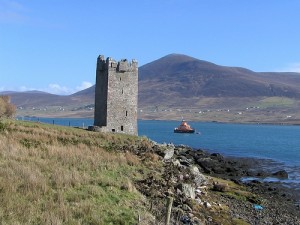 Achill has a fascinating history and there is lots to see and explore, including early megalithic tombs and standing stones, a crannóg site, holy wells, early Christian monastic settlements, a deserted villages and famine ruins.

Granuiale’s Tower is a fifteenth century tower house built by Grace O’Malley, the infamous Irish pirate queen of the 1600’s. Close to the tower is the 12th century church and cemetery at Kildavnet. The graveyard here is fascinating, with graves from medieval times alongside more recent ones. 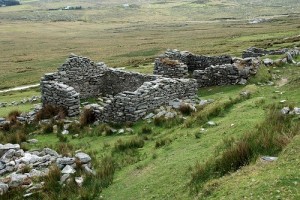 The Deserted Village at Slievemore, almost 100 stone cottages stretching for a mile along southern slopes of Slievemore mountain, was abandoned in the second half of the 19th century.

Its residents, the victims of famine and eviction, mostly emigrated to America.

The area around the village is rich in archaeological remains including several megalithic tombs dating from the Neolithic period,  5,000 or more years ago.

Hire a local fisherman to take you by Yawl or Currach (traditional local boats) from the harbour at Bullsmouth to your own deserted Island, tiny Innisbiggle, an uninhabited Island just a few minutes away across the sea. 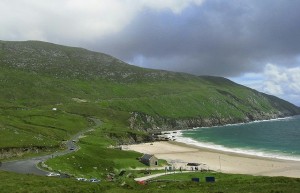 Achill has some of the best beaches in Ireland, the best known of which is Trawmore, which stetches from Keel to Dookinella. The beaches at Dooega, along the route of the Atlantic Drive is also wonderful, as are the two beaches at Dooagh.

My favourite though is Keem, where there is a small, sheltered and lovely beach that is usually less crowded than the others.

There is great surfing on Achill, particularly Trawmore, and surfing gear can be hired locally. Keel Lake is shallow, easily accessible and, crucially, almost always windy, which makes it a perfect place for kitesurfing – again, kit hire is available. 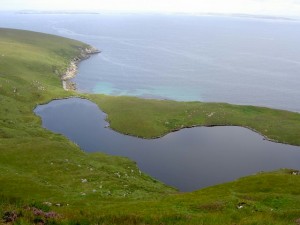 The Minaun Walk takes you to a lofty hill from where, on a clear day, the views seem never to end and you will feel that the whole world is yours. Hardier walkers can tackle the Achill’s highest mountain, Slievemore.

For the more adventourus, Annagh is a remote part of a remote place and accessible only by foot, but those who get there are rewarded with truly spectacular scenery.

It’s a very tempting place to pitch camp, but be warned – there are many local tales of ghostly apparitions and strange happenings in this area at night, so do so at your peril!

The Bervie Guesthouse at Keel is an exceptional guesthouse overlooking the sea with magnificent views along the coast and out over Innisboffin, Innisturk and Clare Islands.

Murrin’s Way is a traditional Achill cottage, with up to date comforts, that has wonderful views, open fires and is a very pleasant walk away from Keel.

In Keel the Beehive (098 43134) is a craft shop and restaurant which serves excellent seafood and locally influenced dishes, including a delicious nettle soup.

On a good day you can eat outdoors overlooking Minaun Cliffs.

Also in Keel, but very different, is the Ferndale Restaurant, where house specialties include Greek, Mongolian and Swiss dishes.

The George is a pub unusually located in a wing of the old Landlord’s house and is a lively spot, popular with locals. McLoughlin’s in Achill Sound, Lavelle’s in Cashel and Gielty’s in Doonagh are also good pubs. All regularly have traditional music sessions.

Have you something to add about "Achill Island"?