Home » What to See » Islands » Inishmore

Inishmore means ‘large island’ and this is the largest of the Aran Islands and the one most developed for tourism. It is as its name suggests a fairly large Island, about 12 square miles, and has a year round population of about 900, which increases significantly during the tourist season.

View from Dun Aengus by tbennett

The Forts of Inishmore

The word fort can cause some confusion when used about ancient buildings in Ireland.

In many cases it is quite unclear what the purpose of these places was, but it is certain that they were not forts in to-day’s sense of being an army base. While clearly build to withstand attack, many were family enclosures, built in a time where skirmishes over territory and cattle stealing were common and thus the need to defend obvious.

Others probably had a ceremonial role, though the exact nature of the ceremony is a mystery.

It is certain that although some were later adopted and used by Christian settlements, they pre-date Christianity by some considerable time and are definitely not, as you will ofter read online, early Christian in origin.

Dún Aengus (The Fort of Aengus) 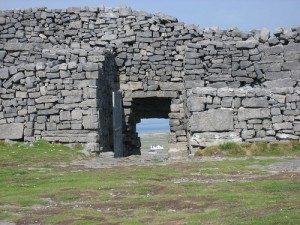 Part of the walls, by kathryn_rotondo

Dún Aengus is the largest of the forts on Inishmore and quite a sight.

Dating back some 3000 years, it’s very large indeed, enclosing an area of some 14 acres and although it looks as though it must have had some defensive use, it is believed it was mainly used for ceremonial purposes.

The fort is built on the edge of a high sheer cliff and consists of concentric horse shoe shaped walls, the inner one 13 feet thick and up to 18 feet high in places.

All the walls were built without morter, you can see where the restored parts are, because morter was used. The walls come right up to the cliff edge, so either the cliffs themselves were considered ample defense on that side or the walls originally there have fallen into the sea at some past time.

The views from the fort are magnificent and worth the fairly arduous climb needed to reach it. 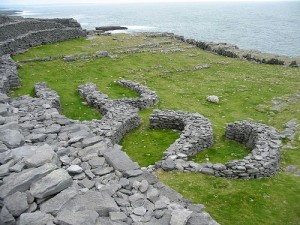 This again is a walled enclosure built with cliffs on all but one side, making it almost an island in itself.

Some of the walls at Dún Dúchathair are arranged into intricate patterns (see picture above), which again raises the question of whether it was defensive or ceremonial in purpose.

This double walled fort, with almost completely intact walls, is situated at the highest point on Inishmore, giving a clear view ofevery part of the island. It is believed to have been built sometime between 550 and 800 BC and was probably home to an extended family and their animals.

Unlike the other forts this one is located away from the shore located in western part of the island. Consisting of three low concentric walls it too was probably a family settlement.

What Else to See? 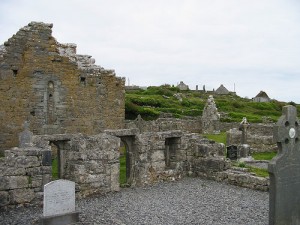 The monastic settlement known as the Seven Churches (though only two of the buildings were ever used as churches) dates back to the 8th century and there are the remains of some 11th century high crosses here too.

Teampall Bheanain, or the chruch of Bheanain, a saint contemporary with St Patrick, is a tiny church, just 10 sq feet inside, and is claimed locally to be the smallest church in the world.

Clochan na Carraige is a beehive hut and would have been home to a monk.  It has an unusual structure in that although it is circular from the outside the inside space is rectangular.

There are many seals off the shores of Inishmore and the best place to see them is at the Seal Colony, in the north side of the Island about half way along the coast. You see more of them if you time your arrival for low tide.

Time was when you could just get off the ferry and start to explore the island, walking up to Dún Aengus, and generally enjoying the peaceful and beautiful setting.

Now you are met by a crowd of hawkers on arrival, jostling to sell you Island tours in one of the many buses or jaunting cars lined up by the pier. These tours will whisk you around the main sites before depositing you at the interpretive centre.

There you will certainly find some good and interesting information about the Island and the fort, but also yet more touristy souvenirs of dubious quality and another hard sell. There is an “Aran Sweater museum”, which is really a store, full of nonsense about clan aran sweaters, a marketing ploy designed to sell sweaters to tourists.

I can totally understand that the Island people need to capitalise on what they’ve got. I just fear that by over doing it they may spoil what is a near perfect place.

And I’m sad to report that that Supermacs (think McDonalds) have opened a large outlet on Inishmore. Where will it end? 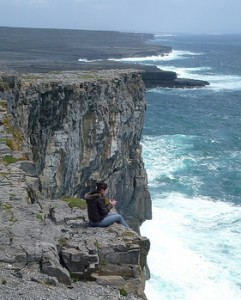 Yes, yes, yes – please go, it’s a wonderful place. Fight your way through the offers of tours and hire a bike to tour by yourself – nothing is more than 3-4 miles away from Kilronan where the ferry lands and is a very pleasant cycle. Or walk.

Do not head straight away for Dún Aengus – as most will – but for the equally interesting but far less visited Dún Dúchathair or either of the two other forts.

The cliffs near Dun Aengus are easily the match of those at the Cliffs of Moher, and you can just walk along them unimpeded by ‘interpretive centres’ (I still don’t understand why cliffs need any interpretation) or obstacles. You can, if you dare, even sit on the edge, dangling your feet over the wild Atlantic.

Now a booming town in Dublin's commuter belt, Drogheda has a long and …