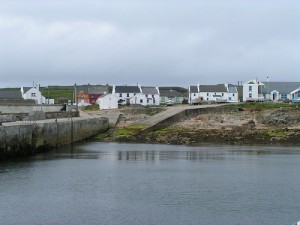 Tory Island, off the coast of Donegal, is a tiny place, just 3 miles long and half a mile wide and reachable only when the weather is favourable.

It is still inhabited, with its population of just under 200 spread over four tiny towns – West Town, East Town, Middletown and Newtown. A piece about Tory Island on the BBC radio programme “From our Own Correspondent” described it very well.

“Tory is like a granite kaleidoscope where the shifting patterns of light in the seas and skies produce a curious ephemerality, as though the cliffs and beaches somehow change every time you look away.” 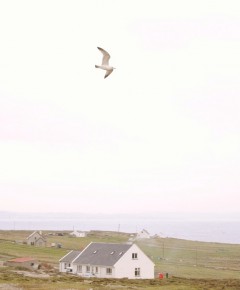 The landscape on the island is remarkable, with grassy headlands leading to pinkish-granite cliffs and towers of rock rising up from the sea, battered by the Atlantic into extraordinary shapes.

The bird life is diverse and interesting and the island is a magnet for bird watchers.

Seabirds nest here in very large numbers, including  guillenots, razorbills, kittiwakes, puffins, strom petrels, manx shearwaters and fulmars. It is also one of the few place in Ireland where the corncrake survives.

St. Colmcille founded a monastery there in the sixth century, though part of a round tower and the ruins of two churches are all that remains of the settlement.

Your visit to Tory will start with a personal welcome from royalty! The King of Tory Island is elected by the people of the Island and although the title holds no legal status it is one that confers considerable honour on its holder.

The current incumbent is Patsy Dan Rodgers, who makes it his business to personally greet every visitor on arrival and quite often lead them from the ferry in a parade complete with music. That’s Patsy Dan playing the accordion in the video.

Most of the islanders work off the island, many of them in the fishing industry or on oil rigs in the North Sea. There is no industry and little local employment, other than a few seasonal jobs providing services to tourists.

The island is the unlikely home of a celebrated school of painters, who work in a naif primitive style and whose work is extremely sought after internationally. The tradition of painting is relatively recent, and started after a local man commented, on looking at the work of a distinguished visiting artist, Derek Hill, that he could do just as well. He had a go, so did others and now there are regular exhibitions of the work of Tory Islanders all over the world.

There are always some paintings on display in the community hall.

The only way to Tory is by Ferry, from Bunbeg or Magheroarty in Co Donegal. Once there you have a choice of accommodation. The only hotel is a small one, with just 14 bedrooms, but there is also a hostel and a number of bed and breakfasts.

The hotel houses the only bar on the Island, indeed the only place of entertainment, though there are often events taking place in the community centre to which visitors are warmly welcomed.

Tory is not a social whirl and there are few concessions to tourists but you will experience a magic place, meet some extraordinary people and have memories that you will treasure for ever.