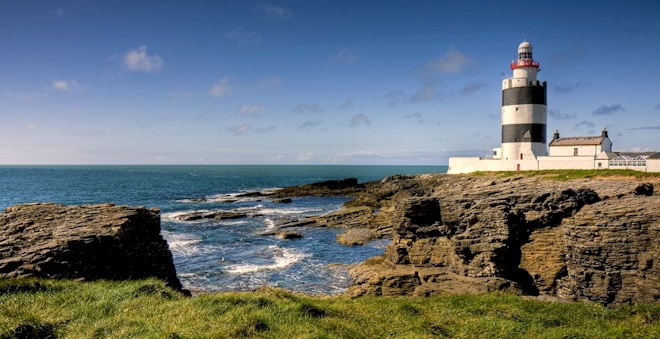 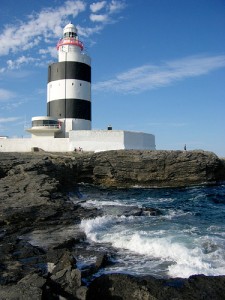 For almost 800 years the lighthouse at Hook Head has shone a beacon for sailors off Ireland’s South-East coast, making it one of the oldest working lighthouses in the world.

In fact the first light here may have been lit centuries earlier. Sometime in the 5th century a Welsh monk, named Dubhán, established a monastery just north of the current lighthouse.

Tradition has it that he lit a beacon to protect sailors on the approach to Waterford Harbour and kept it burning for more than 7 centuries. He also gave his name to the area – dubhán is the Irish word for a fishing hook.

The Monks were still there when the Norman lord Raymond LeGros built the first tower here in 1172. It was enlarged later by building a larger tower outside the existing one – the winding stairway which leads to the top is between the walls of the new and old towers.

The monks continued to maintain the light until 1641 when they left the area and the light went off. A series of shipwrecks followed and 25 years later it was reopened by order of Charles II and has shone pretty much constantly since then.

“By Hook or By Crook” 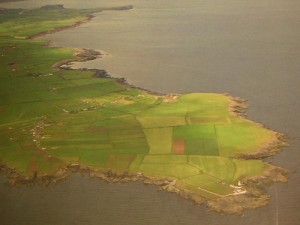 This phrase is said to have been first uttered by Cromwell, when he vowed that he would take the port town of Waterford “by Hook or by Crook”.

Crook Head is on the opposite side of the Suir estuary from Hook Head, so they are the two points that guard the entrance to the port. He succeeded.

Over the centuries various methods were used to power the light at Hook Head. The monk’s original beacon was probably simply a fire, burning timber and whatever else was available. When the tower was built the fire was housed in a lantern at its top, where it was protected from the weather and its smoke was taken out through a flue, which allowed it to burn more brightly.

By the 1790s things had become more sophisticated and a series of oil lamps whose glow was accentuated and directed using lenses and deflectors was installed. Oil lamps remained as the source of light, with some improvements as the years passed in the type of lenses used, until 1871 from when coal gas powered the beacon.

n 1911 the coal gas burners were replaced with new ones powered by paraffin and this was the fuel used until the lights were first powered by electricity in 1971.

Keeping the light aflame needed constant attention throughout most of its history and until 1977 the lighthouse keeper lived with his family in the adjoining cottages. That year Hook became what was known as a ‘relieving lighthouse’, with keepers rotating duties, so that the light was constantly manned, but not living full time at the site.

In 1996 the lights were automated and lighthouse keepers are no longer required.

The lighthouse visitor centre is open every day year round, with longer hours during the Summer months.

The most enjoyable way of getting there is by driving South from Waterford to Passage East, then taking a short car ferry ride to Ballyhack. Almost as soon as you leave the harbour at Ballyhack you will see the lighthouse.