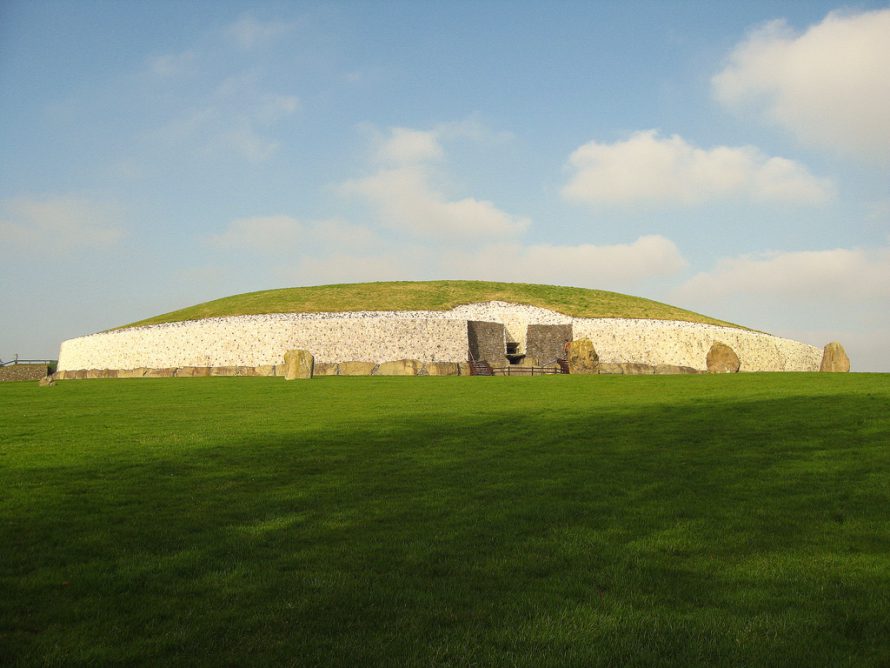 Some of the most extraordinary megalithic structures in the world, the passage tombs of Newgrange, Knowth and Dowth, are centred around an area known as Brú na Bóinne [say: brew nah bonyah] on a bend in the River Boyne to the west of Drogheda in Co Louth.

About 5000 years old, these ancient places predate the pyramids and are built with a sophistication and a knowledge of science and astronomy that is nothing short of astonishing.

The area is recognised as a UNESCO World Heritage Site and apart from the three best known sites there are as many as 36 others in the area, many unexcavated, in addition to a huge number of standing stones and stone circles.

All of these remarkable structures bear eloquent testimony to the populous and sophisticated society which thrived in this area thousands of years ago. 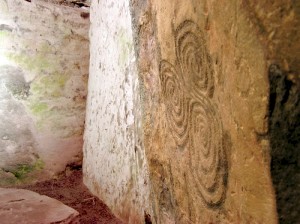 While generally referred to as tombs, it is not at all certain that this is actually what these remarkable structures were.

It is known that human remains were found in them by those exploring them several centuries ago, but not those of single individuals. Rather the remains of several bodies were present in the tombs.

Many historians now believe that they may have been involved in rituals around death, while not being the final resting place of the dead. It is known that at this period in Ireland cremation was common, and it may be that following cremation human remains were removed to these places where they stayed for a time, possibly until the next illumination occured.

The obvious attention to these astronomical occurances means they had an important role in the people’s lives and, presumably, in their deaths. The ‘tombs’ may have been part of the ritual of the transition of the dead from this world to the next.

The Tomb at Newgrange 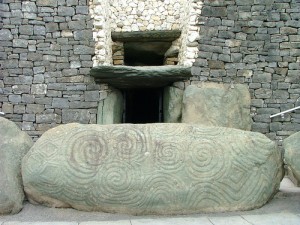 The best known and most visited tomb, Newgrange is most famous for its astronomical alignment.

Above the entrance, which is formed by two upright slabs of stone topped by a lintel, is a hole known as the roof box.

Inside the entrance a long passageway leads to a cross shaped inner chamber, which is normally in complete darkness.

However on the morning of the winter solstice, the 21st/22nd of December, the rays of the rising sun shine through the roof box, move gradually up the passage and illuminate the inner chamber.

Initially thought to have been just a lucky occurrence, it is now clear that it was nothing of the kind but was carefully planned by those who built the tomb.

Only a few lucky individuals ever see this phenomenon, but there is much of interest there apart form that. The mound is surrounded by large stones, known as kerbstones, many of them elaborately carved with spiral patterns, one of which guards the entrance.

The meaning of the carvings is unclear, but it is striking that they appear to many people quite Celtic in style – although the Celts did not arrive in Ireland for more than 2500 years after they were carved.

The tomb at Knowth 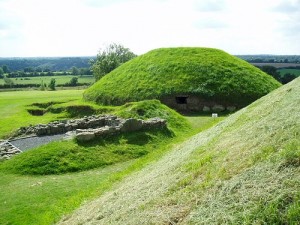 The tomb at Knowth is a little larger than the one at Newgrange and although less well known is more interesting.

Knowth has two passageways – a 40 metre long East facing one which ends in a cross shaped chamber similar to that at Newgrange and a shorter, curved West facing one.

In addition to the main tomb there are several other mounds and cairns in the vicinity.

This site is especially noted for its stone carvings and is one of Europe’s most important locations for the study of Neolithic art. Two thirds of all known Megalithic Art in Western Europe is found in the area of Brú na Bóinne and more than half of it is at Knowth, with more than 300 decorated stones.

Most of the carvings are probably simply decorative, others may have a religious significance, but for the most part their meanings are not known. However one has been identified as the world’s earliest known lunar map, predating the next oldest one, which was created by Leonardo Da Vinci, by more than 3000 years.

Another interesting feature here is the presence of a basin stone. This was a large stone with a basin-like hollow, where the remains of the dead were placed following cremation.

Normally it would be in the inner chamber, but at Knowth is it wedged between the walls of the passageway, where it is believed to have become stuck when thieves attempted to remove it several centuries ago. 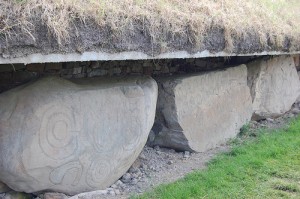 The tomb at Knowth may seem impossibly ancient, but it was predated by Neolithic dwellings on the site and the remains of a dwelling and a number of smaller, probably earlier, burial mounds can also be seen.

Not all of the remains at Knowth go hack thousands of years.

The foundations of a house of the early Christian period is also visible, the ruins of a medieval grange or fort can be seen on the top of the mound and there is an intact medieval kiln which was used to dry grain.

There are also a number of ‘souterrains’, short cave like passages dug into the cool ground, with stone entrances. These were built about 1200 years ago and were used primarily to store food, the low temperatures inside the passages preserving it and their hidden nature keeping it safe from enemy raids, particular from Viking raiders.

The Tomb at Dowth 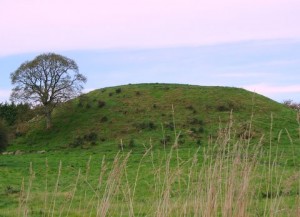 The least known of the three major passage tombs, Dowth is believed to be the oldest. Three are two passage graves, both on the west side, and a third more recent tunnel which dates to the early Christian period, when it was built as a hiding place for monks.

Sadly a lot of damage has been done at the Dowth site, by a Victorian archaeological excavation which, to say the least, did not adhere to best practice, and later by extensive quarrying activity in the area.

Unlike the other two sites, which can only be accessed vis the Brú na Boinne centre, visitors can simply drive to Dowth and look around free of charge. Although there is no access to the interior chambers of the mounds at Dowth, this flythough of a laser scan survey of the interior shows just how complex and extraordinary a place it is.

There was a time when you could just wander up to the tombs at Newgrange and Knowth and explore at will, but the need to protect them for the future means that you must now first visit the Brú na Bóinne Visitor Centre at Donore and join an organised tour.

The Centre has extensive information about, and exhibits relating to, the tombs, including a replica of the inner chamber at Newgrange and a model of one of the smaller tombs at Knowth. Visitors are brought to the actual sites by shuttle bus.

You can only book your place on a tour after you have arrived at the visitor centre – there is NO advance booking. Tours sell out fast – in summer and on weekends in winter they are frequently sold out before 1.00pm. So it is very important to visit as early in the day as you possibly can, partly to make sure you get onto a tour but also to avoid having to hang around the centre for several hours waiting for your tour to start.

If you want a less organised experience, it is possible to visit Dowth directly. Loughcrew, which is nearby, is another location with a huge number of megalithic remains and is relatively little visited. Fourknocks, meaning ‘The Cold Hills’ which is an apt name, about 15 miles away, is even less known and to get into the only one of the four tombs there that has been excavated you must collect a key from a local house.

For more details about the tombs and visiting them, this site is way more informative than the official one.

I’ve shown this map in satellite view because it is well worth exploring this way, zooming in and out and panning around this area of the Boyne Valley, particularly the areas immediately around each tomb. It is astonishing how visible patterns in the landscape – mounds and folds, circular ‘structures’ and lines – clearly show the remains of a previous, and obviously extensive, civilization the lies only semi-hidden beneath the fields and farms there today.

The more you look, the more you see. I’ve made this map particularly large to facilitate your explorations!