Ceide Fields is off the beaten track, but well worth the effort involved in getting there.

An ongoing archaeological dig is gradually unfolding a remarkable story of Stone Age life – it is the largest known Stone Age settlement in the world.

It’s lovely but… there’s nothing there? 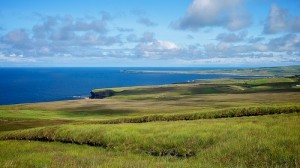 It may not look like much more than a bog, and it is a bog. But the bog has been keeping secrets.

That we are now learning its secrets is thanks to an observant local school teacher, Patrick Caulfield.

While cutting turf at the bog at Ceide in the 1930s he noticed that be repeatedly found piles of stones below the turf.

Patrick’s son Seamus was not even born then, but he became an archeologist and returned to Mayo to study the stone arrangements his father had noticed years before. What he discovered changed completely our knowledge of early habitation in Ireland, and indeed of neolithic life anywhere in the world.

The Secrets of the Bog

Covering an area of more than 3000 acres are field systems, dwellings, animal enclosures and tombs dating back more than 5500 years – that’s more than 200 generations ago and over 2000 years before work began on the pyramids. Nowhere else in the world is there such extensive remains of a Neolithic farmed landscape.

Artifacts recovered at Ceide Fields tell a story of a much more advanced lifestyle than anyone previously suspected to have existed in Neolithic times. 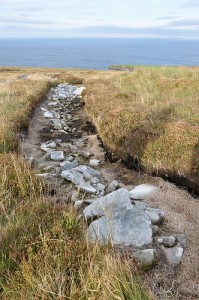 There are complex field systems, houses and tombs. Evidence has been found of sophisticated use of tools, of pottery making and skilled stone and wood work.

Archeological research at Ceide shows that these people cleared forests to create arable land and used remarkably advanced methods of farming. They planted and harvested wheat and barley, kept animals and there is even evidence that they used animal manure as fertiliser.

They had living areas and animal pens and built tombs for their dead.

While these findings speak of a successful farming society, they also show that it ended badly. People prospered here for probably around 1000 years and then, apparently, it all went wrong. All the remains found were broken and fallen before the bog covered them, the site had obviously been abandoned. So what happened?

The theory is that they were the unwitting architects of their own demise. The clearance of what had been a thick canopy of trees meant that falling moisture, instead of evaporating from the tree tops,  now reached the ground, gradually washing nutrients from the soil and making it infertile.

One can imagine crops beginning to fail after generations of rich harvests, leading to the eventual abandonment of the land. Then slowly the bog grew over what they left behind and these ancient people were forgotten until Patrick Caulfield spotted their work.

The visitor centre building has won a number of architectural awards and is of interest in itself, created from limestone and peat and merging beautifully into its surroundings.

In fact arriving is something of a surprise, there seems to be nothing there and then suddenly you are right in the car park! 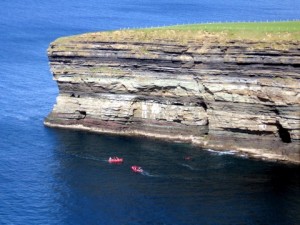 The exhibits in the visitor centre provide very good explanations of the significance of the work going on outside and I’d recommend spending some time there before going out to the site itself.

Without the insight the tours and exhibits provide it is not easy to make sense of what has been revealed here. Guided tours, often led by archeology students, are an essential part of a visit to Ceide Fields.

It is worth taking a walk or a drive along the coastline in the area around Ceide Fields, which gets little mention in guide books and few visitors but is really quite wonderful.