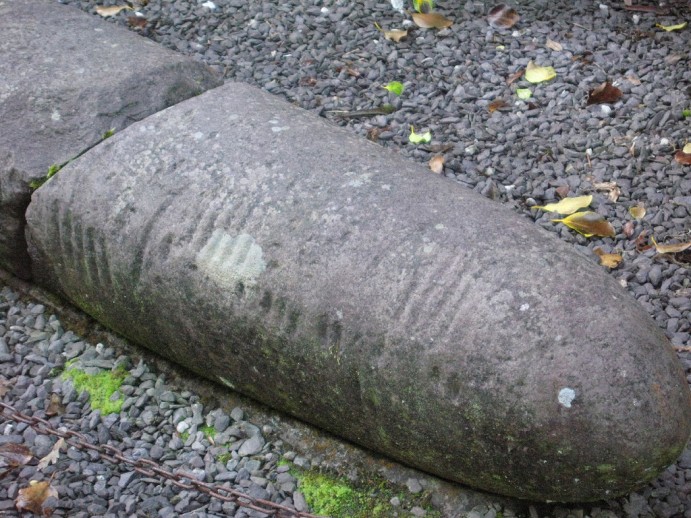 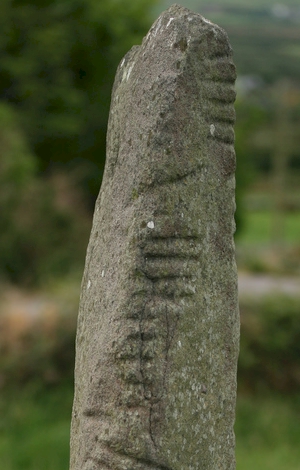 Ogham (pronounced ‘oh-am’) is a primitive alphabet which takes the form of linear strokes cut into stone, etched onto wood or written down.

It is seen in inscriptions on stone and sometimes in scripts written by early Christian monks. It is commonly said to date back as much as 2500 years, but isn’t quite that old.

The earliest known examples date from the 4th century AD and are primarily seen on burial stones. It was later written down and can be seen in manuscripts, often as margin notes, written as late as the 16th century.

One 10th century scribe added the Irish word ‘Latheirt’ in a margin, written in Ogham. This old Irish word means ‘ale killed us‘ -presumably the poor monk had over indulged in the ale commonly produced in monasteries and was feeling the after effects at work the next day. It’s a story as old as time!

There are 20 main characters, which broadly correspond to the Roman alphabet, and five Forfeda, symbols which correspond to sounds in the Irish language not covered by the main characters.  An example is a symbol for UI – as in uileann pipes – which is pronounced something like the ‘i’ in it. 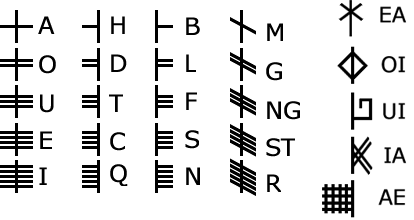 It is found extensively in Ireland, where it is widely believed to have originated, but also in Scotland, Wales, England and the Isle of Man.

The characters of the Ogham alphabet each comprise between one and five perpendicular or angled strokes arranged around a central line.

Although it looks nothing like letters or writing as we know them to-day the letters of the alphabet correspond to those of the Roman alphabet and so we can ‘translate’ them.

What Ogham survives was mainly used to carve names or short inscriptions onto important stones, usually grave stones or stones that acted as territorial markers.

It is likely however that is was also used extensively on wooden structures, but few of these survive.

Inscriptions are read from the bottom left upwards. Longer passages sometime continue, and are read, across the top and down the right side. When written in manuscripts, the writing is read from left to right.

Much has been written about the connection between Ogham and druidic or pagan practice. There is a widely held belief that each letter of the alphabet corresponds to a tree or plant, hence the name sometimes given to ogham: “The Alphabet of Trees. However there is no historical support for this belief  and it is more likely to be superstition or even wishful thinking. Others suggest that the symbols were used as a druidic calendar or even as a means of runic divination.

There is no evidence to support any of these theories however and they are not supported by historical data.

Where to See Ogham Stones

There are several Ogham stones in the National Museum in Kildare St in Dublin but also many examples around still standing at or close to the location where they were first placed as long as 2000 or more years ago.

The complete Ogham Alphabet is here – useful for the increasing number of people who like to sport a tattoo of their name or those of their loved ones!

For those with an interest in linguistic history this article is a scholarly look at interpreting Ogham inscriptions.

Map of Ogham Stones in Ireland

The markers below are not exhaustive – there are many more Ogham stones in Ireland – nor are they all at the exact locations, but they are pretty close – if you get yourself to any of them you can ask a local for directions for the last few hundred yards!