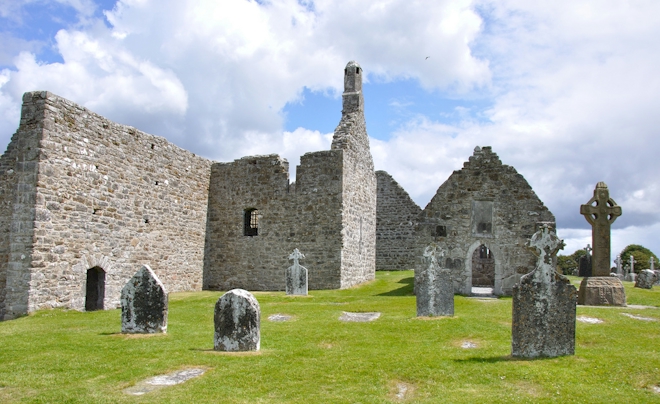 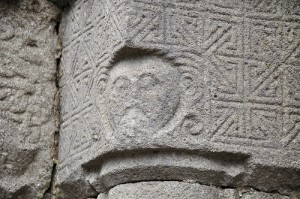 Carving at the Nun’s Chapel

Founded by Saint Ciaran, sometime in the 6th century, Clonmacnoise is one of the oldest and most important early Christian settlements in Europe.

Built in the centre of Ireland where an ancient roadway crossed the River Shannon, its location gave it great strategic importance.

Today the buildings at Clonmacnoise are mainly in ruins, but there is much of interest to see and some of the most ancient and precious artefacts of Irish Christian history are here.

The History of Clonmacnoise

The name Clonmacnoise means ‘meadow of the sons of Nóis’ and dates to a time long before the monastery was founded. There is archaeological evidence that this site was inhabited and important as far back as the Iron Age, more than 2500 years ago.

So it is probable that when St Ciaran arrived in the mid 5th century he founded his monastery not in a completely isolated place but close to an already established settlement of some importance.

The Esker Riada & Pilgrimage to Clonmacnoise 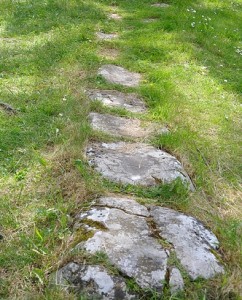 The Esker Riada (also known as the Slí Mhór or ‘great way’) was the most important roadway in Ireland for several hundred years, from as long as 1,500 years ago. Running from the east to the west of Ireland, it is a natural formation, a high mound composed of sand and stone, created at the end of the ice age.

Pilgrims are recorded as using this route to travel to Clonmacnoise as early as 606BC, making it possibly the oldest pilgrim route in Europe.

While most of the route has now become part of the N6 roadway, as small section of it, known as the ‘Pilgrim’s Road’, remains at Clonmacmoise.

Pilgrims are a rare sight now at Clonmacnoise, though there are still occasional exceptions and during his visit to Ireland in 1979 Pope John Paul II made a point of visiting the settlement. 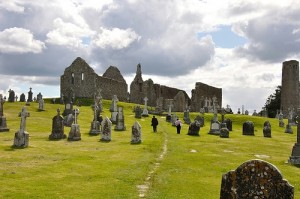 In the 500 years from the start of the 8th century AD Clonmacnoise grew to become a huge monastic city with a large lay population around it.

It was a place of religious learning and a place of pilgrimage, renowned for its literary and artistic achievements and enjoying the patronage of Kings and Chieftains, who funded the construction of churches and high crosses. Two of the last High Kings of Ireland are buried there.

As well as ecclesiastical building there are the remains of roads, bridges, a river port, a crannog, houses, wells, kilns and other structure at the site and many finely worked bronze, glass, silver and bone artefacts have been uncovered.

Clonmacnoise was not always peaceful, over the centuries it was raided by both native Kings and later Vikings and even fought a notorious battle with the rival monastery of St Columba in Durrow. Buildings were destroyed and rebuilt many times.

The round tower, the high crosses and most of the 10 churches, including the great cathedral, were built between the 9th and 11th centuries, often replacing earlier damaged buildings or ones made of wood.

The End of the Monastery 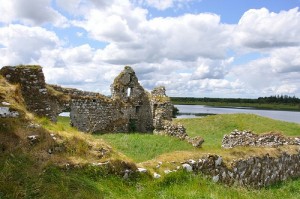 Early in the 12th century, the Anglo-Norman de Burgo family erected a royal castle at Clonmacnoise, establishing their claim to the area and curtailing the rights of the local inhabitants and those in the monastery.

At the same time, the town of Athlone began to increase in importance, and the population at Clonmacnoise began to fall, as people migrated there. More monastic centres grew up around Ireland, essentially becoming rivals to the existing ones.

These factors combined to bring about the decline of Clonmacnoise. While remaining a place of pilgrimage and enjoying occasional brief resurgences in its fortunes, it never again was the important centre it had once been.

By the mid 17th century Clonmacnoise had passed from Catholic hands into Church of Ireland ownership. Most of the buildings were unused and it had become again a quiet remote location.

What to See at Clonmacnoise

There is really so much to see here, but we only have space for a few highlights. 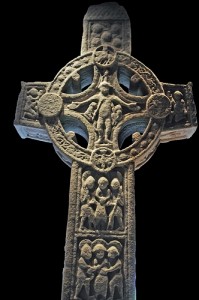 Cross of the Scriptures

Three ancient large crosses stand in a semi circle around the Cathedral, but the ones outside to-day are replicas, the originals are safely inside the visitor centre to protect them from erosion.

The most famous is the Cross of the Scriptures, decorated with scenes from the bible, elaborately carved on all its surfaces. It was erected for Flann Sinna who was High King of Ireland from 879 to 916, probably at the same time as the cathedral was built.

The many other crosses you see around the graveyards are of much later origin and modelled on the early crosses. 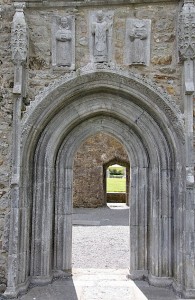 According to legend this Gothic style doorway, the north entrance to the Cathedral, was once a confessional.

Priest and penitent would stand facing the wall, one each side of this door, and whisper to the stone. Their voices carried to each other around the curve of the door remaining unheard by others.

Over the years this became a place where lovers came to whisper their true feelings to each other.

Whatever the truth of the legend, it does work!

Churches and Round Tower 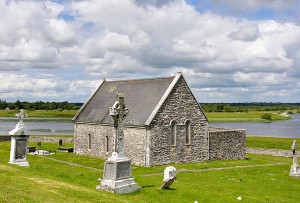 Of the 10 churches that once stood here, only a few remain standing.

The cathedral is the largest of these, built at the start of the 11th century in an ornate style with many Gothic elements. This is where Turlough O’ Connor and his son Rory, the last high king of Ireland, were buried in 1156 in 1198 respectively.

Mac Laffey’s Church is part 10th century, but was extended and remodelled in both the 17th and 18th centuries, by which time it was a Church of Ireland parish church. It was later abandoned for the smaller and less ornate Temple Connor, which continues to be a parish church to-day. 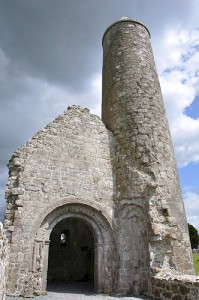 The Round Tower was built in 1124. It was hit by lightening in 1135 and badly damages, and the top part rebuilt sometime later. It is now 119 feet high but was once about a third taller.

Close to the river banks are the remains of the castle built by the Normans in 1214.

There have been more than 600 carved cross-slabs or memorial stones found at Clonmacnoise, ranging in date from the 8th to 12th century.

Remarkably, most still have clearly decipherable names on them.

Sincere thanks to Fergal Claddagh who is responsible for all the images of Clonmacnoise on this page. He has hundreds of other fabulous images of Ireland also – well worth a look.

The site today is owned by the Government who maintain an ongoing programme of preservation, and is open to the public year round. There is a short audio-visual presentation available in the visitor centre which gives almost essential background prior to an exploration of the site – do try to see it.

It is also very worthwhile taking a guided tour at Clonmacnoise. Because much of it is in ruins it can be difficult to grasp how all the buildings related to each other and were used, having a knowledgeable guide explain it all is very interesting and useful. Tours last about 45 minutes and are included in the cost of admission, which is free with a Heritage Card.

There are two special days at Clonmacnoise when it will be particularly busy. The annual Church of Ireland Open-Air service takes place on the last Sunday in July, and the annual Catholic St. Ciarán’s Pattern Day is held on the third Sunday in September.