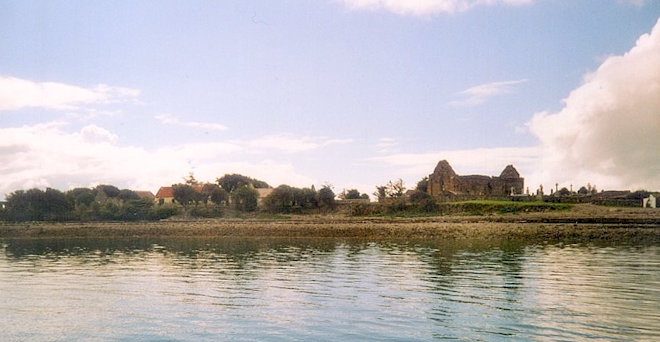 Scattery Island is one of the most fascinating places in all of Ireland to visit and relatively few tourists make it there.

The tiny island is on the Shannon River, and was inhabited from 534 when St Senan established a monastery there, until the last Islanders left in 1978.

How Scattery got its Name

Even before St Senen arrived, Scattery was a place famed in legend. Local people believed it was home to a terrifying monster called “The Cata”, a sort of evil sea serpent, which may have given the Island its unusual name.

Another theory is that the name derives from the Norse word Scatty, which means treasure, and dates to the time when the Vikings raided and ransacked the Monestery there. 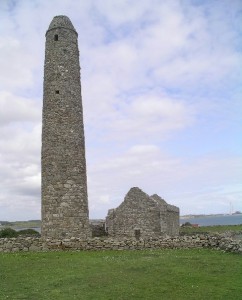 Round tower by Warren Buckley

On his arrival Senen reportedly established his credentials early by banishing the serpent without delay and then commencing the building of a monastery.

Several of the buildings on the Island today date back to Senan’s time, including the round tower – at 120ft one of the highest in Ireland – but perhaps his most famous legacy is the name of the great river on which his monastery stood: the Shannon is named after him.

He died in 544 and was buried on the Island at a place now known as St Senan’s Bed. However his monestery continued to thrive for almost 3 centuries, becoming widely renowned for the austerity of the lives led by the monks there.

The Vikings Take Over

In 816 the Vikings raided Scattery, killing many monks and plundering the monastery. They returned on several occasions afterwards, eventually establishing a settlement there.

The location of the Island gave them easy river access to as far away as Limerick, where they held power on and off until the early 1100’s, retreating to their Island when the local people periodically gained the upper hand.

By the 15th century the Normans had arrived in Ireland, and the Vikings were long departed. The O’Cahane family had taken possession of the Island and commenced work on a small castle or tower house. Today this castle appears to be a ruin, but in fact it is an unfinished building, for reasons unknown work on it was never completed. However the O’Cahanes remained as one of the foremost families on the Island until the 20th century. 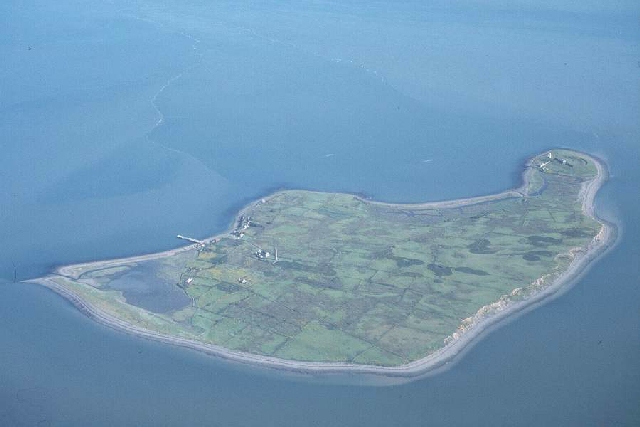 Scattery Island from the air

Well, it wasn’t an invasion exactly, but in 1588 seven Armada ships sailed into the Shannon and anchored in the harbour at Scattery. They were battered and wounded from battle and sought to repair and reprovision their vessels, but were not greeted with open arms.

The Island by this time housed a garrison of Queen Elizabeth’s army, and though the Spaniards offered locals a ship in return for help with repairs, they were refused, presumably because of fear of the potential repercussions.

During their seven day stay, the Spaniards were forced to abandon a particularly badly damaged ship, burning and then sinking it in the river. I’ve never been able to find out if there are any remains still on the river bed, but presumably there are – though no treasure, anything of value was removed to other ships which are recorded as eventually making it safely back to Spain.

The Shannon was always an artery of travel and with its easily navigable channel also a place where invaders could potential gain access to huge swathes of English held territory. It was this risk that led to the building of a series of coastal batteries, or defences, on the island in the 18th century.

The remains of the battery stands still on the southern end of Scattery, protected by a block house which also accommodated soldiers. The battery itself id a D shaped building surrounded by a moat and provided mounts for six large cannon pointing towards the river estuary. They were certainly ready for an invasion – but it never came. 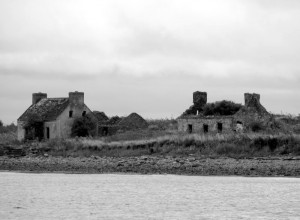 The Street by Mark Waters

From the 15th century until it was finally abandoned in 1978, the same nine families lived on Scattery. Their lives always centered around the river and they traditionally provided river pilots who guided ships and boats on their journey up the Shannon to Limerick.

The Island is almost unique in Ireland as one of the few places where the population actually increased during the years of the famine, rising to a high of 141 people by 1881. Most of them lived at an area known simply as ‘The Street’, of which only a few ruined houses now remain.

The islanders were a close knit people and had their own customs and culture. Best known is their unique approach to burying their dead. Most Irish graveyards are, and have always been, regularly visited and very well tended by local people, but this was not the case on Scattery.

The jumble of disorgnaised gravestones still visible in and around Teampeall na Marbh (the Church of the Dead) exists because the islanders only ever entered burial areas twice for each death. The first occasion was for the burial, after which the grave diggers left their shovels lieing crossed on the grave. The second visit was a month later, on an occasion known as ‘flagging day’ when the shovels were removed and a gravestone erected.

It was believed that in the intervening time the departed soul resided in purgatory. After the stone was erected, a bottle was broken over the grave and holy water scattered on it, releasing its occupant to heaven. The grave was never visited again. 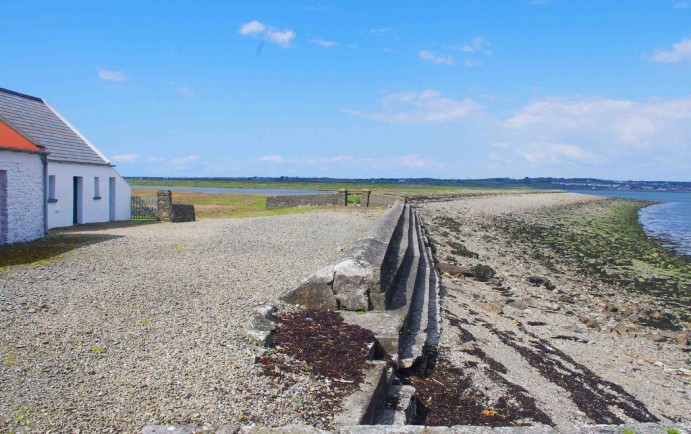 The Island is accessed by boat from Kilrush Harbour at Cappagh. While there is no charge for entry, you will have to pay for the boat trip.

There is an exhibition of the history of the island in the visitor reception building, near the pier, which is well worth seeing.

The (love it or hate it) Golf Links Tour: Ireland North

Sweep around Ireland's North coast, with great day by day itineraries for …