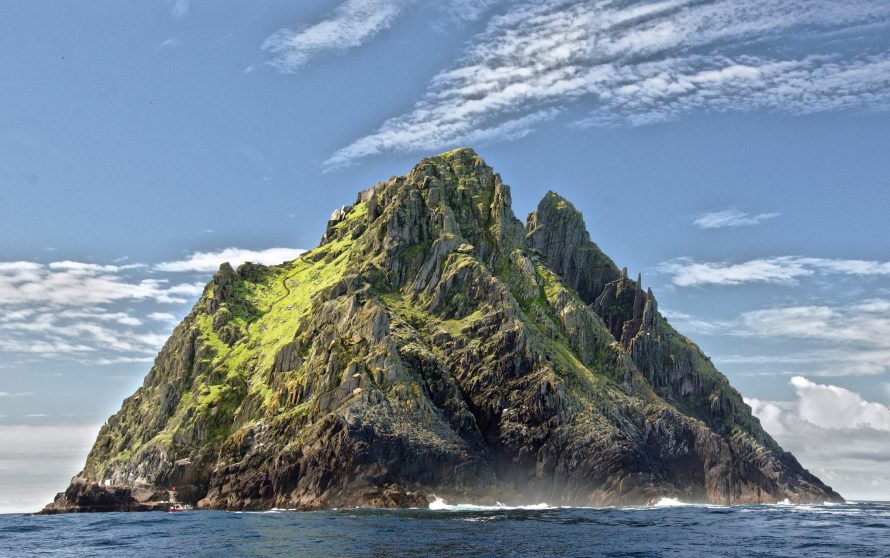 “… the most fantastic and impossible rock in the world … the thing does not belong to any world that you and I have lived and worked in; it is part of our dream world.“

These are the words of George Bernard Shaw on Skellig Michael and it is difficult to disagree. 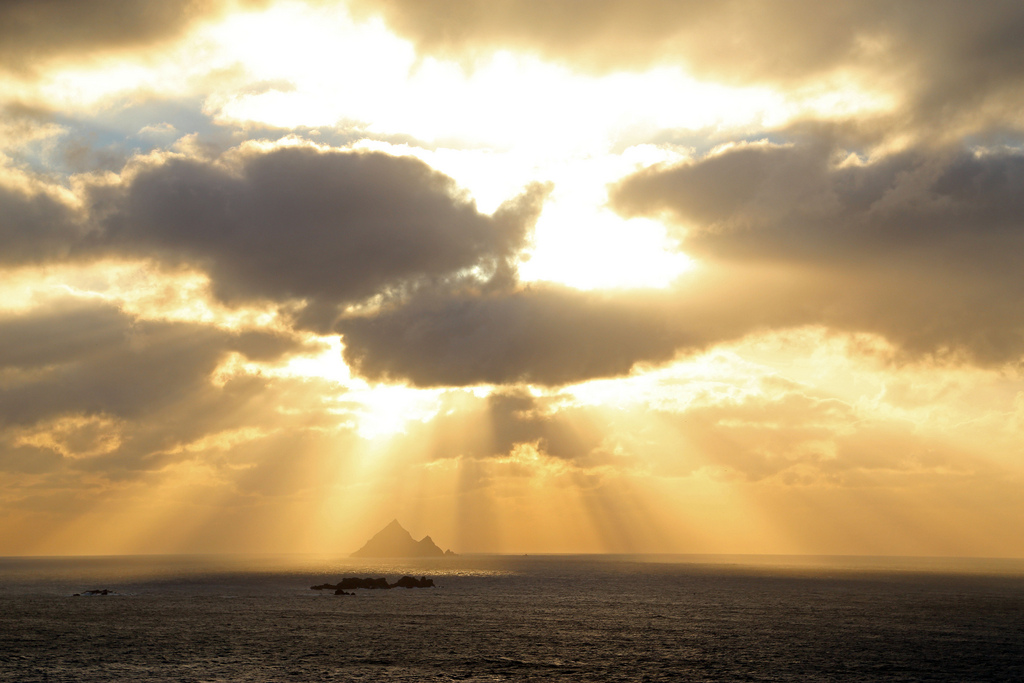 Also known as the Great Skellig, this is not so much an Island as an outcrop of rock, rising over 700ft above sea level and with an early Christian Monastery perched on a ledge close the top.

Its international importance is recognised and it is a designated UNESCO World Heritage Site.

For over 600 years this remote and unlikely spot was an important centre of monastic life. A small cluster of six beehive huts and two boat shaped oratories remain, stark and silent now but an eloquent testimony to the austere life led by the monks whose home Skellig Michael once was.

Anyone visiting is bound to wonder how on earth anyone ever thought to chose such a place to live and to create a monastery.

While its historical importance today is primarily due to the Christian monks who lived there, it is likely this was a place of pilgrimage long before Christianity came to Ireland. Ancient legends tell of “Daire Domain”, the King of the World, living there and the place is also mentioned in tales of the Tuatha De Danaan, oral accounts dating from 3000 years ago.

How and when the monastery came into being is not clear. Its foundation is most often tentatively attributed to St Fionan, a Kerry saint who lived around 500AD, but there is no evidence for this. It is certain that from the late 6th to the 12th centuries monks lived and worked there.

Precisely why they choose such an inhospitable place, nobody knows. There was definitely a taste for the ascetic in early Irish Christianity though, as these lines from a 9th century poem illustrate:

“I wish, O son of the Living God, ancient eternal King, for a secret hut in the wilderness that it may be my dwelling.”

The Great Skellig would certainly fit the bill perfectly!

During the 9th century the Island was raided a number of times by Vikings, in search of ecclesiastical treasures, and although remote it was a fairly easy target. At times the sea and the weather provided natural protection, as well as an obvious sense of relief judging by this comment in the margins of a manuscript of the period:

“The wind is rough tonight, tossing the white combed ocean. I need not dread fierce Vikings...”

The monks prevailed however and in about 1000AD a new chapel was added which suggest that the monastery was thriving.

The monastery is small and compact: an inner enclosure contains two oratories, a small church and seven beehive cells or huts.  There is also the remains of a ‘latrine’ and a cemetery with crosses and cross slabs. Outside of this enclosure are two terraces, the ‘Monk’s Gardens’, surrounded by high outer retaining walls.

The image below uses technique to make the topography more clear and makes the organisation of the buildings in the monastery clear. Hover or tap for key. 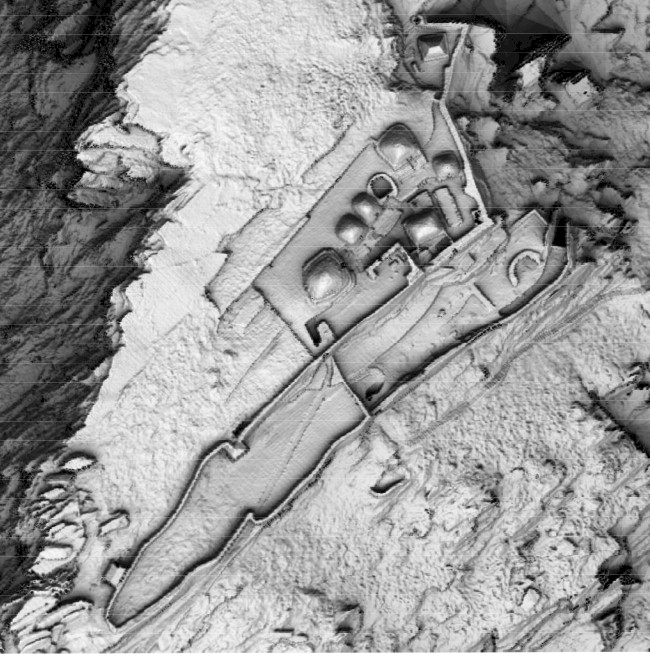 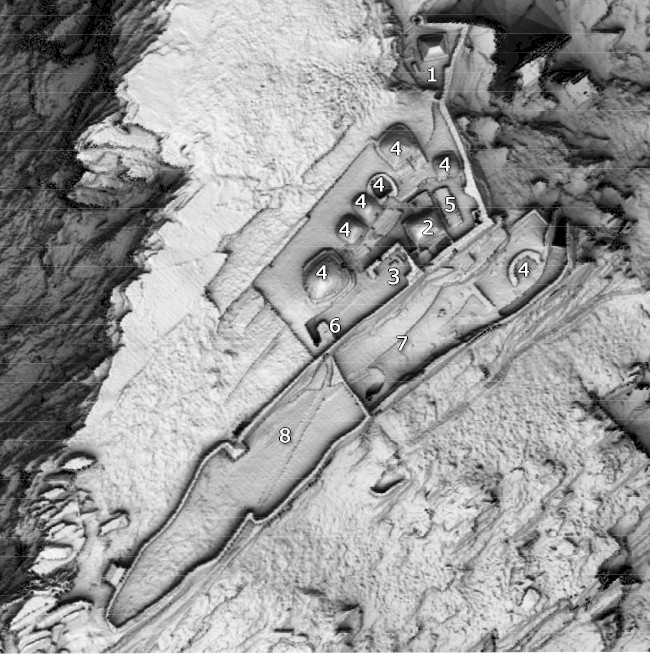 Near the Small Oratory you can see the remains of the latrine which was built in a similar style to the beehive huts.

How the Monks Lived

For a place inhabited so long by monks relatively few artifacts were found during excavations: some pottery, a single writing tool and a couple of bronze pins were the main findings. This suggests that life was simple, requiring little in the way of material goods, and revolved mainly around prayer and the tasks required for survival.

The monks were largely self-sufficient, though there were also deliveries of food from the mainland. Crops, mainly barley and oats, and vegetables were grown in the sheltered gardens.

They kept livestock, mostly goats which suited the inhospitable territory and provided both milk and meat but also pigs and sheep. They hunted and ate seals and wild birds as well as eating quite a lot of fish and shellfish, mainly limpets but also scallop and oysters. Shellfish is readily available on the rocks and in rock pools and most of the fish they ate could have been caught at the shore. Cod bones were also found and since this is a deep water fish it would have required a boat, so either the monks had one or were supplied by one.

All the evidence suggests they ate well and it doesn’t seem that fasting was a big part of their life. Realistically this may have been at least in part because they accepted the reality that to live in such a place you needed to remain strong and well-nourished.

The distinctive beehive cells or huts in which the monks lived are remarkable, not just because they are still standing and intact centuries later (albeit with the help of conservation), but because of how they were constructed. 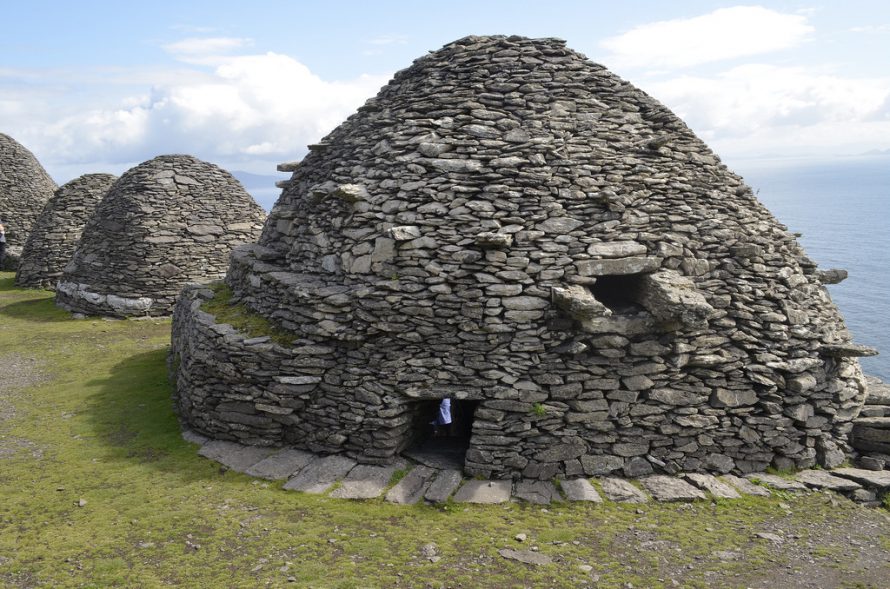 There is no mortar, they are entirely made of dry stones. While circular outside, the inside is rectangular, with a corbeled roof and shelves for storage built into the structure as well as larger platforms for sleeping on. Simple they certainly are, but with a great deal of sophistication in their structure just the same.

The community at Skellig Michael was never large – probably about 12 monks and an abbot. Sometime in the 12th century the monks abandoned Skellig and moved to the Augustinian Monastery at Ballinskelligs on the mainland. However the island continued to be a place of pilgrimage with several accounts of penitential visits during the 1600s and later. 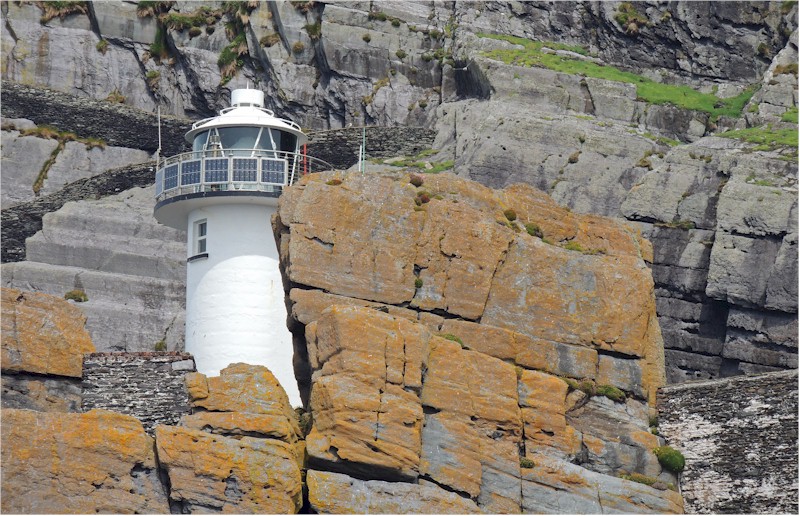 Between the 1820s and the 1860s two lighthouses were built and the Great Skellig was again inhabited, this time first by builders and then lighthouse keepers. The lighthouses had adjoining houses for both keepers and assistant keepers and their families, who lived there for prolonged periods.

Interestingly, while the lighthouses were being built the construction workers lived in the beehive huts which were repaired to make them weather tight, and had their office in the Large Oratory. This oratory was later returned to its original function and used as a chapel by the lighthouse keepers and their families.

Life certianly wasn’t easy for those who kept the lights. In 1869 W. Callaghan, a lighthouse keeper, asked to be moved to another station as he had buried two of his children on Skellig and another was ill. A grave in St Michael’s Chapel records that Patrick Callaghan, aged 2, died in December 1868 and William Callaghan, aged 4, died in March 1869.

By 1901 keepers and their families no longer lived full time on Skellig, instead they lived on the mainland in Valencia and keepers operated the lights on a rota of shorter stays, traveling initially by boat and later by helicopter.

The second lighthouse still operates, though it was largely rebuilt during the 1960s, automated in 1981 and unmanned in 1987, since when there have been no lighthouse keepers living on the island. The light was converted to run on solar power in 2001.

Wildlife on the Skelligs

Both Skellig Michael and its smaller neighbour, Little Skellig, are filled with bird life and together comprise possibly the most important seabird colony in Ireland, in terms both of population and of species diversity. 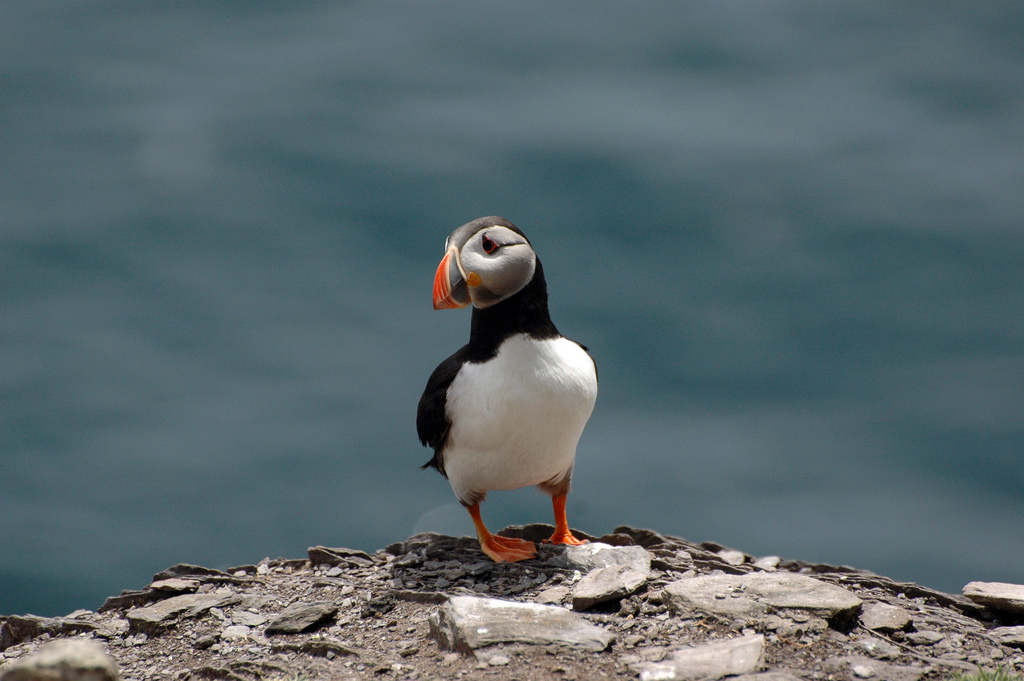 Among the birds you can expect to see are Storm Petrels, Gannets, Fulmars, Manx Shearwaters, Kittiwakes, Guillemots and Razorbills and less commonly, Clough and Peregrine Falcons.

But the perennial favourites are the Puffins, with some 4000 or more of them on the Great Skellig alone. They treat visitors with an indifference that borders on contempt and it is possible to get very close to them.

The surrounding waters team with life also. During a cruise you would be unlucky not to see Grey Seals and may also see Basking Sharks, Minke Whales, Dolphins and if you are really lucky a Leatherback Turtle.

Skellig Micheal is enjoying renewed fame of late due to its starring role in Star Wars: The Force Awakens. It’s not hard to see why it was an attractive location, it is truly a mystical and mysterious place, but its use was not without controversy.

On one side of the argument were those who felt it was either inappropriate or potentially damaging to a unique place that is structurally fragile and has a unique wildlife. Others believed that the publicity would bring more visitors to a part of Ireland that is really almost completely dependent on tourism, and that this trumped any concerns.

In the event it does not appear that any significant damage was caused – only two minor incidents were reported. The film crew were respectful of the island and generally felt to have gone out of their way to ensure that no damage was caused.

Filming again took place on Skellig in late 2015 for the next episode of Star Wars.

The settlement on Skellig Michael survived the battering of the elements for many centuries, but the greatest threat to its continued survival is more recent and comes not from the weather or from pagan looters, but from tourism.

From the 1970’s on, as the importance of this place became evident, many thousands of visitors tramping up and down the ancient steps and in and out of the buildings began to take their toll.

So now there are restrictions on the number of tourists who can visit, with just 10 boats licensed to land on the island, each permitted to sail just once daily and carry no more than 12 people. As boats can only land in good weather, this means that no more than about 12,000 people annually now land on the island.

If visiting was tricky in the past, expect that status to be upgraded to near impossible following its outing in Star Wars.

There are two boat operators that we particularly recommend: 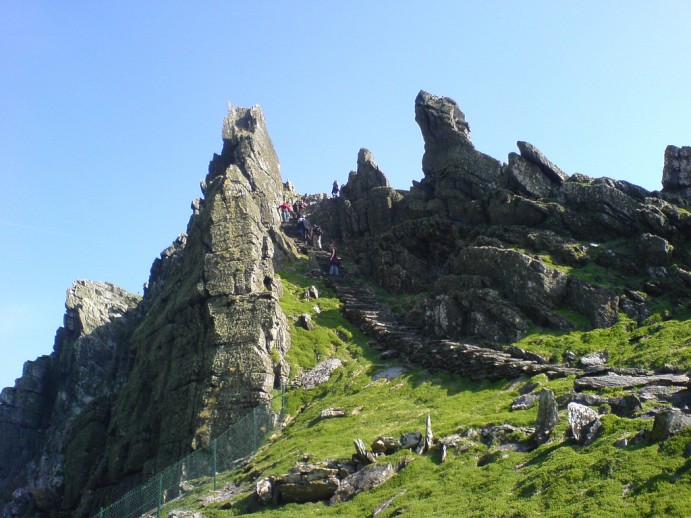 The climb to the monastic settlement is arduous with many uneven steps, well over 500 of them, to be negotiated. Access from the boat requires visitors to climb steep steps also. For this reason a visit is only recommended for those who are relatively fit and is simply not possible for anyone with mobility problems. Please take this warning seriously – there have been fatalities on the Island.

Anyone who wants to know more about Skellig Michael and its monastic history is in luck. The University of California Press have kindly made available the fully illustrated book “The Forgotten Hermitage of Skellig Michael” free of charge online.

An extensive and detailed report about archaeological excavations and finds conducted by the Office of Public Works is available as a PDF.

There is a detailed history of the lighthouses and of how they operated, right up to the present day, at the Commissioner of Irish Lights website.

There is an excellent visitor centre, The Skellig Experience, on Valencia Island, close to the Ring of Kerry, where visitors can learn about the history and wildlife of the Great Skellig and can see reconstructions of some of the buildings.

There are also many boats offering cruises around Skellig Micheal – without landing – which give a close up glimpse without endangering either the ecology or state of preservation of the monuments there. These leave from the area around the visitor centre every day of the year, weather permitting.

Once home to the world's largest telescope, Birr Castle has a fascinating …

Ailwee Caves are Ireland's largest cave system, deep beneath the Burren in Co …