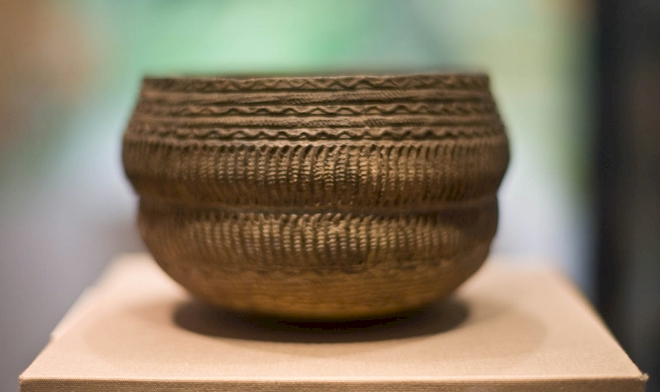 A good example of an excellent local museum, with well designed exhibitions tracing the history and heritage of Cavan from pre-Christian times right up to the mid 20th century.

Particularly interesting exhibits include the Lavy Sheela-na-gig and a wonderful exhibition of costumes in the Pighouse Collection, originally collected by a local enthusiast Mrs Phyllis Faris.

Main image: Food vessel circa 2000BC by Gerard Lovett 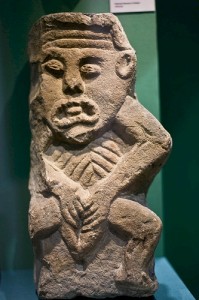 There are also good sections on traditional farming in the area an a GAA Gallery which will primarily be of interest to followers of Cavan GAA, but for them it is a treasure house of sporting history and includes a large collection of medals, cups, jerseys, and programmes.

A small but well assembled exhibit about the famine years in Cavan includes, poignantly, a pair of shoes recovered from a famine grave.

Local hero Percy French, a renowned singer and entertainer who was born in nearby Roscommon and died in the 1920’s but is still very much alive in the communal memory of the people of the area, is commemorated with a tribute which includes recordings of some of his best known songs.

The museum is housed in a magnificent 19th Century building which was previously a convent of The Poor Clare order of nuns and there is an exhibit which tells about the sheltered and devout life they led.

On the top floor a contemporary art gallery holds regular exhibitions, often of work by the many artists who live in the area.

The museum is open all year round from 10am to 5pm Tuesday-Saturday and during June-September also on Sundays from 2pm to 6pm.

There is a craft shop, a cafe and an excellent children’s playground, which will make a visit here a winner even for those too young to really appreciate the treasures inside.

Have you something to add about "Cavan County Museum"?