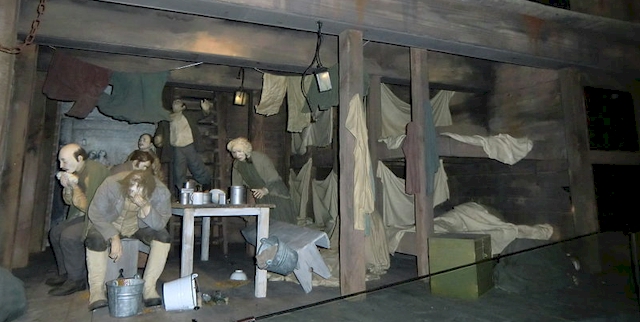 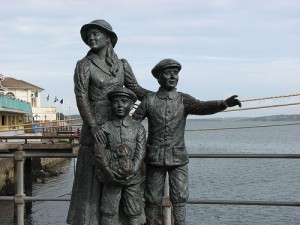 Leaving for America, by Keo the Younger

Between 1848 and 1950 over 6 million people left Ireland for a new life in America, and for almost half of that number Cobh was the point of departure.

With its large and deep natural harbour, Cobh was a stopping point for many passenger ships en route to America from Europe and was the last port of call of the Titanic.

Another ship, the Lusitania, sank off the coast in 1915 after being torpedoed by a German submarine. All of these dramatic and tragic events are commemorated in the Cobh Hertiage Centre, built within the now disused port railway station.

The centre houses reconstructions of what life was like for the unfortunate poor escaping starvation aboard ships to the ‘new world’, which brings home all too vividly the grimness and horror of their situation.

Those who felt fortunate to be able to afford a passage must surely have questioned their luck while enduring horrifically overcrowded conditions, where food and water were in very short supply, sanitation was absent and disease rife. Many did not survive the passage, and of those who did many were often terminally weakened by what they endured on the journey.

The statue outside the centre, pictured above, is of Annie Moore who left Ireland from Cobh and was the first person processed through Ellis Island when it officially opened on 1st January 1892.

The conditions in which those on famine shipe travelled are in stark contrast to the luxury enjoyed by wealthy passengers on the great ocean going liners that were regular visitors to Cobh in the heyday of transatlantic travel by sea. There is a fascinating display of artifacts and records related to these ships, with special attention paid to the ultimately tragic ships the Titanic and Lusitania.

Many speak of opulence and wealth, with monogrammed linen, fine cutlery and luxurious upholstery, though of course not everyone on even these ships travelled in such style. 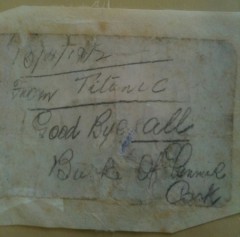 Among the most poignant exhibits from the Titanic is this note, which was placed in a bottle and thrown overboard by by 19 year old Jeremiah Burke.

The note simply reads ‘From Titanic, Goodbye All, Burke of Glanmire Cork’. The bottle washed up some days later close to his home in Glanmire, but Jeremiah was among the 1503 people who lost their lives when the ship went down in 1912. 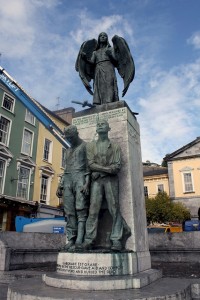 Just three years later another Cunard ship, the Lustania set sail from New York bound for Liverpool, at a time when crossing the Atlantic was fraught with danger due to the First World War. It was only minutes from the harbour at Cobh when it was hit by a German torpedo.

Although the seas were calm and the water relatively shallow, the ship went down in minutes and lifeboats, for a multitude of reasons, were not scrambled in time for more than a fraction of those on the ship to be taken aboard.

A frantic rescue effort was mounted, with a flotilla of small boats setting out from Cobh and other parts of Cork, which along with the lifeboats managed to save 761 people. 1,198 people perished and no trace was ever found of almost 900 of them.  150 of those whose bodies were eventually recovered  were later buried in the Cobh Old Cemetery, just north of the town, many of them unidentified.

A memorial to those who lost their lives stands in the centre of Cobh.

The Town of Cobh 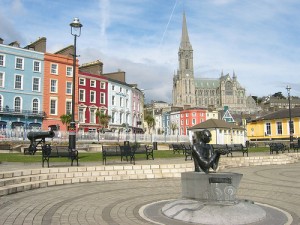 Cobh is an attractive town, built on a steep hill which rises over the harbour and is dominated by St Colman’s Cathedral, a building which is also worth a visit. Luxury liners still call regularly to the harbour, so you may see one during a visit – or even arrive on one!

The Sirius Art Centre in the Old Yacht Club is also worth visiting, with regular exhibitions many by local artists.

An interesting guided walking tour of the town, known as the Titanic Trail, leaves from the Commodore Hotel twice daily in the summer months and fills in a lot of information about the town’s history as a point of emigration and a port for large ships.

The tour takes about an hour and includes a pint of Guinness in a traditional pub.