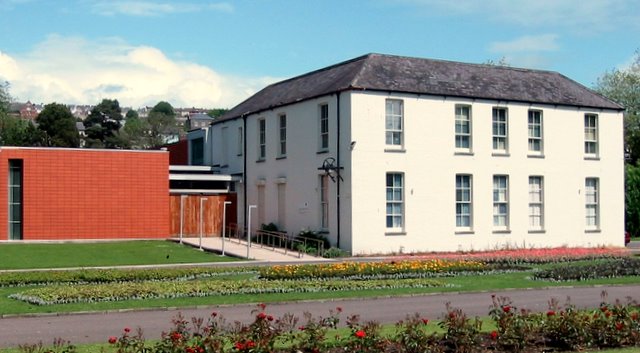 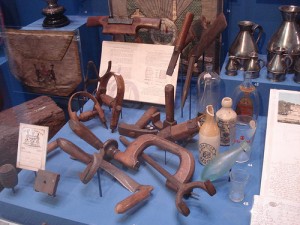 This is a traditional style museum, concentrating heavily on items that relate to Cork city and the surrounding area.

To be honest, it’s not a place that will be of huge interest to everyone, but entrance is free, there are several quite interesting exhibits, a calenedar of special exhibitions throughout the year, a nice garden outside – so it is definitely worth a look if you are in Cork if not a major detour.

The exception is if you have Cork roots or a particular connection to the city, in which case it is a must. 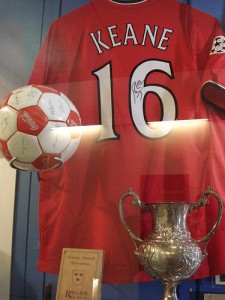 A large collection of glass, coins and assorted memorabilia tells the story of the commercial and political history of Cork and of famous local figures of historical importance.

Among the latter are Micheal Collins, still a controversial political figure almost 90 years after his death, and two martyed mayors of Cork, Thomas McCurtain and Terence McSweeney.

Look out for the Cork City coat of arms, carved in stone, close to the entrance which was rescued from the old city hall after it was destroyed by fire.

There is a particularly good collection of Irish silver and glassware and a few nice examples of old lace. In the silver section look out for rare examples of what is known as “Republican Silver”, highly prized by collectors. This was produced during the Irish War of Independence and was assayed locally rather than in Dublin due to the risk of transporting it.

There are a number of items and documents relating to the famine period and a small collection of Egyptian artefacts.

An extension to the museum was opened in 1996 and has provided space to mount regular temporary exhibitions, some of items from the museums own collections, others visiting exhibitions

The Museum Building and Grounds

Known as Fitzgerald Park and built in 1845, the museum building was once home to the Beamish family, famous as the founders of a brewery whose ale, also known as Beamish, is still brewed and still very popular in the locality.

The house is a typical Georgian style dwelling of a merchant family of that time (and Cork has always been a city of wealthy merchants), and was obviously a comfortable home but in no way ostentatious.

Cork City council acquired the building and the land at the start of the 20th century, for the purpose of holding the grandly named Cork International Exhibition of 1902 and 1903.

This was a pretty big event, attended by hundreds of thousands of visitors and was primarily concerned with exhibits relating to Industry and agriculture,  but there was also an art gallery and an amusement park which included a switchback railway, a skating rink, a shooting gallery and an aquarium. There was also a temperance restaurant, not something for which Ireland either then or now would be widely known.

Following the exhibition the site was turned into a public park and there is still some 18 acres of pleasant gardens to stroll though. The house was converted to a museum, which opened in 1910. It closed for several years during World War II, when the building was set aside to be used as an air raid shelter, but reopened in 1945.

The Museum is located in the certre of the city and admission is free. The Riverview Restaurant is a good place for a light meal or snack, and has nice views over the river Lee.