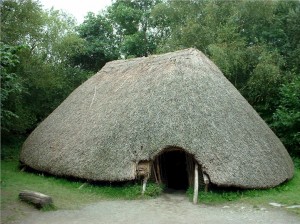 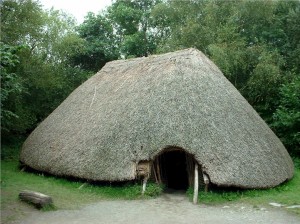 Though its name makes it sound like a nationally owned park, this Heritage Park is in fact privately owned and tells the story of early Ireland through carefully reconstructed buildings and re-enactments of the life and work of Irish people in centuries and millennia past.

While there are no original historic structures here, the reconstructions are as accurate as possible.

Original methods were frequently used when they were built and advice taken from archaeologists expert in each period. Even the planting has been kept as authentic as possible, with native species planted as they would have been at the time.

Although there are remnants of buildings from the periods covered in the park in Ireland, they are incomplete since they were largely built not from stone but wood, skins, wattle and straw. Seeing them as they would have been is interesting and it makes visits to genuinely historical places more interesting when you have an image in your mind of how they would have looked.

Ireland Through the Ages

The park is divided into 5 parts each telling the story of a different period in early Irish History.

Based on excavations such as those at Ceide Fields and Lough Gur, the story of Ireland’s first farmers is told, using implements, dwellings and animals houses typical of the time.

There is also a camp site, such as would have been used by the early hunter gathers who preceded the farming settlements. 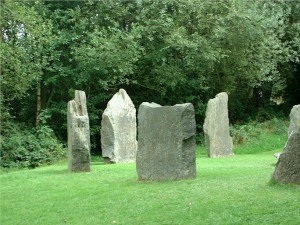 The ability to work metal brought more advanced farming techniques, and more advanced weaponry. Worked metal tools typical of the time are on display and can be seen in use.

It was during the Bronze Age that Ireland’s mysterious stone circles were built and the one here demonstrates how carefully they were oriented and arranged, though to what purpose nobody can definitively say.

This is the largest section of the park and the most interesting. A highlight is the reconstructed Crann≤g – these were man-made islands on lakes, where family groups lived and worked, protected by palisade walls as well as the surrounding waters.

There is also a monastery with a Church, a Monk’s cell, a scriptorium, a refectory and garden. During the Summer months this area is much used for demonstrations of milling, cooking and farming, with costumed characters happy to answer questions about this historic significance of what they are doing.

A recent addition to this part of the park is a Viking ship, a replica of one found in the Gokstad Ship grave in Norway in 1880. It was built onsite by a team from the Viking Ship Museum in Denmark, using methods and tools the same as those originally employed. The ship-builder’s house and the ship yard can be explored as well as other dwellings typical of the time.

This for me is the least successful part of the park, largely because there are so many original Norman castles, towers and dwellings to see in Ireland that a reconstructed one seems superfluous. However kids can have fun exploring the castle and it is of a very early style of which there are few examples in Ireland.

The park is open year round, times vary according to season. There are regular special events which are always worth looking out for – a calendar of events is available at their website. Ferrycarraig, where it is located, is very close to Wexford town and is well signposted.

If you are hungry after your visit, the Dry Dock Bar at the nearby Ferrycarraig Hotel does a really terrific pub lunch (or dinner) which you can eat outdoors overlooking the Slaney Estuary if the weather allows.

For kids this place is a joy as well as an education. They can see (and taste!) food prepared on an open fire, watch corn being milled and bread made from it, go inside a typical stone-age dwelling and general see history come alive.

All of the photos on this page were all taken by my very impressed son, during a day at the park when he was 7 years old.

A branch of the National Museum, which concentrates on clothing, tools, toys and …

Have you something to add about "Irish National Heritage Park"?