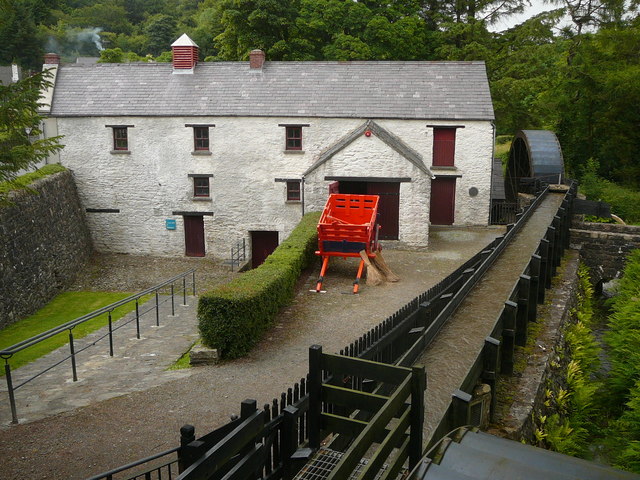 The idea of spending a few hours exploring an old mill and admiring its waterwheel will either fill you with excited anticipation or weary resignation. If you fall into the first camp, the Newmills Corn and Flax Mill won’t disappoint – it may even convert the less enthusiastic into fans of historic industrial infrastructure.

The mill was built by Joseph Hunter but the family most associated with its history are the Gallaghers, who became the owners in 1892 and remained at the helm until the mill closed in  the 1960s. They were evidently an ambitious lot and built up a very impressive complex indeed. In addition to the mill they also owned a large farm, a grocery store, a pub and a forge and a ‘scutcher’s cottage’, where workers labouriously separated out the parts of the flax stems valuable for producing linen.

All of these buildings, plus the old Gallagher family home, are now owned by the state, which ensures they will be conserved as a unique example of the kind of multi-purpose complex that was once common in Ireland but has long disappeared. I was born into a mini version of something similar myself – a pub and grocery store with petrol pumps at the front and a farm supply shop out the back. It no longer exists either, gone more than 40 years.

What you will see 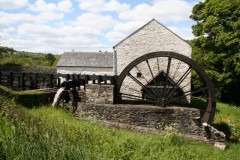 The 25 ft waterwheel here is one of the largest working wheels in the country and sits in a millrace almost 1km long. It easily produces sufficient power for two mills working simultaneously  one grinding flax, the other mainly oats but also barley and maize, all of which were, and still are, grown locally.

All the original apparatus of a working mill,  the stones, sieves, bucket elevators, fans, sack hoists and more, are still on site, and at certain times can be seen working.

Work at the mill went on year round, from late summer to April or May the of following year grinding locally grown barley and flax, then during the summer months, preparing animal feeds from a mix of maize and oats.

The Work of the Mill 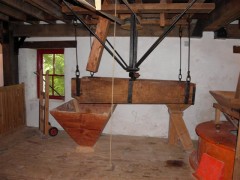 Grain delivered after the harvest went first to the drying floor, where it was spread on perforated metal plates heated from below by a kiln. Each day about 2 tonnes of dried grain were processed through the mill  The grain went first to shelling stones where the husk was removed before the kernal went to the milling stones to be ground to meal or flour.

These stones, made from French Burr, were raised or lowered according to the fineness of meal required. After milling, the meal was cleaned, winnowed and sieved before being bagged and taken to the storage area to await collection.

While this all sounds like a hugely labour intensive procedure, in fact a combination of mechanised hoists, belts, pulleys and elevators of which Heath Robinson would have been proud meant the entire process could be managed without too much difficulty by a single man.

The mill is open to visitors daily from late May late September from 10.00am – 18.00pm. Allow about an hour to visit, and if possible call ahead so that you an schedule your visit for a time when the mill is working.

There is no restaurant on site, but if the weather is nice bring a picnic to enjoy while sitting alongside the millrace.

MuseumsPlaces to Visit in Ireland Donegal