Home » What to See » Museums » The Hunt Museum 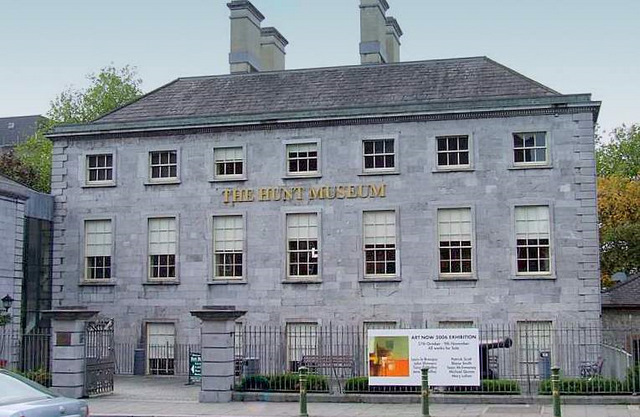 The museum was built especially to hold more than 2000 artefacts collected by John and Gertrude Hunt, antique dealers and art advisers, who collected things that interested them, with no commercial motivation.

Their interests were diverse and the collection is an extraordinary treasure including as it does artefacts from Greece, Rome and Egypt and well as an important collection of early Irish archaeological material.

It ranges from neolithic and bronze age tools and artefacts, through medieval items including statues in stone and wood, painted panels, jewellery, enamels, ivories, ceramics, crystal and crucifixes, up to 18th and 19th silver, glass and ceramics.

There are even some items from the 20th century, including a collection of fashion designed by the Irish designer Sybil Connelly.

Among the individual items which are in the collection are a coin which is said to be one of the thirty pieces of silver, a gold cross owned by Mary Queen of Scots and a menu created by Picasso.

There is also a fine collection of paintings and drawings with work by Pablo Picasso, Pierre Auguste Renoir, Roderic O’Conor, Jack B. Yeats, Robert Fagan and Henry Moore.

It is easy to become breathless when reeling off lists like this, but this truly is a collection without parallel and a must see for anyone with even a passing interest in historical objects.

The Building which now houses the Hunt Museum was once Limerick’s Custom House.

It was built between 1765 and 1769 and was designed by an architect who more often worked on private houses rather than public buildings, which is evident from its appearance.

Built in the Palladian style so fashionable at the time, the building keeps its best aspect a secret. The part that faces the street is plain, but go around the back where it overlooks the river and it’s a different story.

The museum is open from 10am to 5pm Monday to Saturday all year round and from 2pm to 5pm on Sundays.

Free guided tours of about an hours duration are available and highly recommended. They have no fixed path through the collection and will vary according to the interests and expertise of the guide, so if you are interested in a particular part of the collection ask if a suitably qualified guide is available.

There is a museum “Treasure Trail” available for younger visitors but in all honesty this is not a place that will interest children other than those with a particular interest in the sort of items on display and so we have not flagged it as a ‘Fun for Kids’ location.

Have you something to add about "The Hunt Museum"?