Home » What to See » Museums » Trinity College & The Book of Kells

Founded in 1592 by Queen Elizabeth I, Trinity is Ireland’s oldest university and one of the oldest in the world.

It is impossible to walk in the main entrance, under the famous arch, without being aware of the many generations of past students in whose footsteps you are following, students who included Edmund Burke, Oscar Wilde, Jonathan Swift, Ernest Walton, Oliver Goldsmith and Samuel Beckett among many other famous names.

From the arch you enter Parliament Square, which is surrounded by some of the oldest buildings in the college, including the Chapel, the Dining Hall and the Examination Hall.

Some lucky students have rooms in the buildings here, certainly one of the nicest and most convenient places in the city to live.

The campanile, or bell tower (below), in the centre of the square dates from 1853 and was built by Charles Lanyon, who is also known as the architect of much of Queen’s University in Belfast. 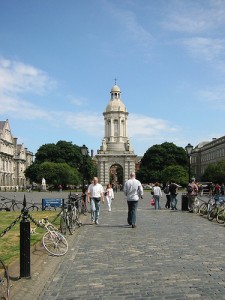 Initially Trinity accepted only Protestant students and although it began to accept Catholics in 1793 they were for a long time very slow to attend – the Catholic Church was disapproving, even censorious, of those who did.

This position, remarkably, didn’t really change until the 1960s and even then for a time Catholics who attended were frowned upon by their church.

Now all that is in the past, there is no such stigma and the students are from all walks of life and all religions, though it still has the reputation of being somewhat ‘posh’ compared to others universities. 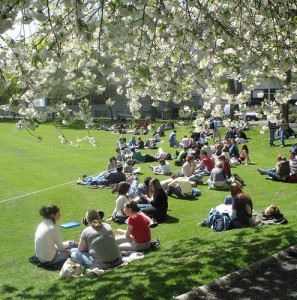 Although situated right in the centre of Dublin, Trinity is a place of expansive squares and leafy greens, with rugby pitches, cricket grounds and tennis courts within its walls.

The public are free to wander the grounds, and it’s a lovely place for a picnic lunch or just to take a few moments out from the bustle of the city.

During the summer months regular guided tours of the campus are available and worth taking – the history of the college and its alumni is fascinating.

The Old Library is the part of Trinity which attracts most visitors and with good reason. 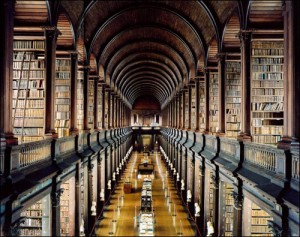 The Long Room by cld

Completed in 1793 its most important room is the Long Room, a wonderful place of high gilded ceilings and arches, and huge oak bookshelves with more than 200,000 old books and other treasures within its walls.

Though best known for the Book of Kells (see below), the library also houses the Book of Durrow, the Book of Armagh, the oldest surviving harp in Ireland and many other interesting antiquities.

When the library at Trinity was first established in 1601 it had just 40 books, now the collection in the Old Library represents only a small proportion of the total book collection at Trinity.

There have been many bequests to the library over the years and since 1801 it can claim by right a copy of every book published in the UK or Ireland. As a result it has amassed a total of well over 4 million titles.

Look out for the first edition of Dante’s La Davinia Commedia (The Divine Comedy) and a wonderful volume of letters from Queen Elizabeth I, all hand signed, relating to the affairs of Ireland and written between 1565 and 1570.

The Book of Kells 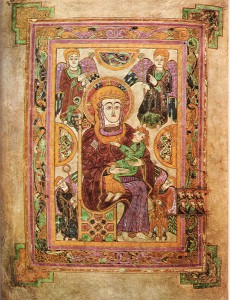 Every morning a page of this ancient manuscript is carefully turned, so that the part of it you see depends entirely on the day you visit.

However even if you hit it on a relatively dull page (and it is relative!) there are excellent facsimiles of its pages in the surrounding exhibition area which really bring home the glorious splendour of the decoration in a way that small photographs on a website never could.

The Book of Kells is believed to have been started by a group of monks on the Scottish island of Iona, who later moved with it to Kells in Co Meath around 806AD, probably to escape from Viking raiders.

It has been in Trinity since shortly after the college was founded.

The Book contains the text of the four Gospels, handwritten in beautifully worked calligraphy and decorated with amazingly intricate drawings and embellished letters in coloured inks and dyes. 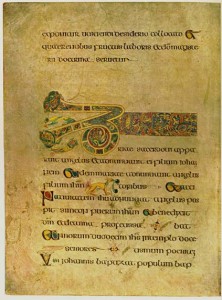 It is the best known of a group of Irish ‘illuminated manuscripts’, including the Book of Durrow, the Book of Leinster and the Book of Armagh which you will also see during your visit.

The detail of the drawing and decorations is astonishing. What looks initially like random decoration will on closer inspection reveal tiny drawings of religious symbols or of cats, birds, even people at work.

The monks worked with the material they used – produced from animal skins – incorporating flaws or hair follicles on the vellum into the illuminations so that they become part of the decoration.

The dyes and inks used were often from as far away as the Middle East, indicating that this was the work of many collaborators, not just those who actually did the painstaking work on the pages.

Visiting Trinity and seeing The Book of Kells

Entrance to Trinity College Grounds is free, there is a charge for entry to the Library and the Book of Kells Exhibition Area.

The library is open everyday all year round, except for a period extending from just before Christmas into the New Year.

More information at the visitors section of the Trinity website.

In high season particularly and at weekends all year round there can be long lines to see the Book of Kells and the exhibition space can become quite crowded. Try to get there as early in the morning as you can, if possible be waiting when the library opens.