Almost every part of Ireland has at least one Holy Well, places usually associated with local saints with water believed by many to have healing properties. There are over 3000 of them.

Some wells are still tended to carefully by local people, with flowers and nice planting surrounding them, some have statues close by and have had access improved with steps or cleared pathways. Others are hidden away and overgrown, but locals will be able to direct you to them. 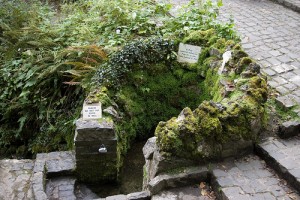 The pre-Christian belief, that drinking from or bathing in the water associated with gods or goddesses would confer gifts of wisdom or healing, meld almost seamlessly with the Christian belief of healing bestowed by saints.

With the coming of Christianity to Ireland the old pagan wells, rather than being abandoned, were gradually given new significance in line with new beliefs, probably with the support of pragmatic missionaries.

Church authorities today are not generally supportive of the devotion shown to local wells but in spite of this an annual mass is still said at a number of them.

There is still a belief in many places that the water from a holy well will keep a person healthy, with some people traveling regularly to fill bottles with the water. If you look closely at the picture above you’ll see that a little metal cup has been thoughtfully provided for visitors. The reality is that the water is often contaminated and should be drunk with great care, if at all.

Rags and Other Offerings

The wells are particularly important in the culture of Ireland’s nomadic travelling community, who regularly revisit the same wells year after year and leave votive offerings at them.

Quite a few wells have trees, stones or statues close to them to which meaning or power is also attributed. Almost all rag trees are in the vicinity of a well. 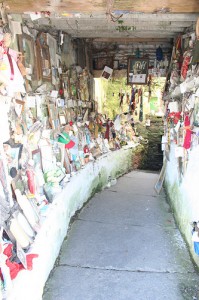 Some wells are given particular reverence and the visible signs of this can be quite startling.

At St Brigid’s Well in Liscannor, inside a small tunnel leading to the well itself, the walls are completely covered with pictures, pieces of clothing, toys, even dog collars left by those who believe that St Brigid will effect a cure or keep a loved one safe.

While this well is tended to by local nuns and greatly loved locally, the story of St Brigid is a classic of the pagan-to-Christian trend.

Practically every story told about St Brigid existed prior to the coming of Christianity and pertained to the pagan Celtic goddess Brigit, daughter of Dagda, one of the mythical Tuatha Dé Danann.

There are at least 15 other St Brigid’s Wells in Ireland and it is certain that most of them pre-date St Brigid.

Many have given their name to the local town or area. Sometimes the connection isn’t hard to figure out: Holywell and Johnswell are pretty obvoius

Other places incorporate the Irish word for well, which is ‘tobair’, which usually appears as ‘tuber’, ‘tubber’ or just ‘tub’ in the English version of the name. The many places around Ireland that are simply called Tubber, and others with name like Tubbercurry or  Ballintober, will certainly have wells.

Sometimes a place name can tell us quite a bit about its well,  such as who the well was dedicated to and a description of its surroundings. So Clontubrid means ‘the meadow of Brigid’s well‘ and Cooltubrid ‘the wood of Brigid’s well‘.

There are so many of these in almost every county in Ireland that you are almost certain to come across a signpost leading to one on your travels.

Someone has taken the trouble to create a long but far from exhaustive list, which you can use if you are really dedicated to seeing as many as you can!