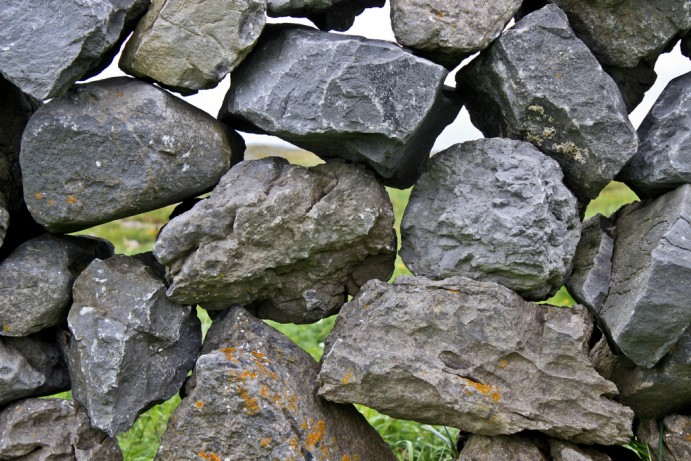 They can be seen throughout the West and South of Ireland in particular and do not seem odd or unusual at all to Irish eyes, but we are so often asked about them by visitors that they evidently seem odd to them!

The typical stone walls associated with the West of Ireland are dry stone walls, which is to say there is no mortar holding the stone together, they are made by carefully selecting stones that will balance and ‘sit’ into the wall as they are built. 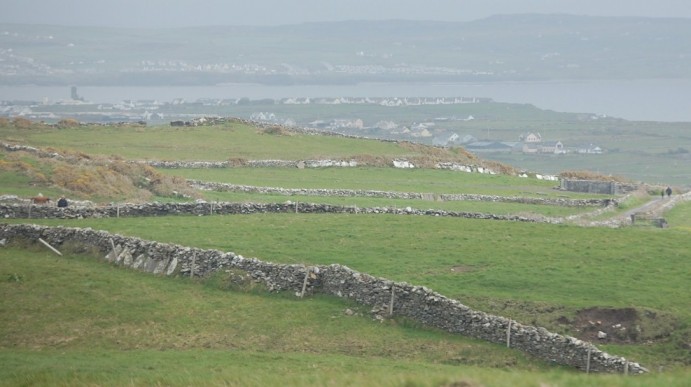 The reason for their existence is both simple and practical.

The land in many parts of Ireland is naturally very stony and in order to be farmed needs to be cleared of stones. Since there was, and is,  no simple method of getting rid of the stones and there was a need to create separate divisions of land, the obvious thing to do was to build walls with the material to hand.

This is reflected in both the distribution of walls and their character.

In Counties Galway and Clare, around the Burren for example, and in much of central Ireland you will see the typical low walls of rounded stone, which have big gaps between the stone. They are made of Carboniferous limestone, very old stones from the ice age which are naturally rounded in shape.

The size of the fields is proportional to the stoniness (or poverty) of the land – if there are more stones to be cleared, more walls are built and the fields are smaller. 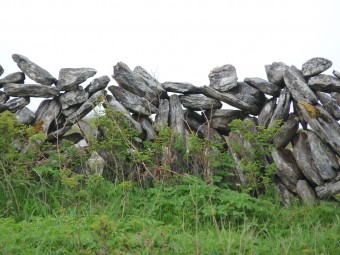 At their simplest these walls are easily built. Boulders are piled on top of each other, often with the largest stones at the base and the boulders getting smaller towards the top, though sometimes this is a subtle thing at best and the stones seem much the same size throughout.

These walls are built without any tools and with no mortar – the stone is not cut, though it may be broken – whatever stones are available are made to fit as well as possible.

The walls are often quite low and not very stable – they constantly need to be repaired by replacing fallen stones, a task which farmers still undertake regularly.

However paradoxically it is their very instability that makes them good barriers, as livestock who are reared in the area are wary of trying to cross them having learned from experience that they collapse rather easily, dropping heavy stones (painfully) on them.

Some of the fields surrounded by these walls have no gates – the wall is simply disassembled to allow entry or exit and then rebuilt.

This type of wall was and is generally built by farmers who work the land where the stones are found and are not particularly skilled at stone work, though of course the skills needed are passed on from generation to generation. However pretty much anyone with the strength to life multiple stones can make this type of wall. 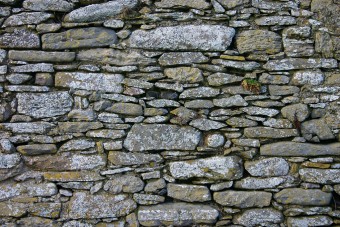 Another style of dry wall requires at lot more skill, with stones carefully selected, positioned and sometimes cut, so that there are few or no gaps and the wall is extremely stable.

These are the work of skilled stone masons, who often pass the technique down in families. In some places locals will know at a glance who built the wall simply by looking at the way the stones are placed.

These too are found more often in the West and South of Ireland, but tend to be in areas of better land and large fields, where the money to hire a stone mason would have been possible.

In other regions mortar is used and there may be a vertical coping at the top, again the work of a skilled builder. 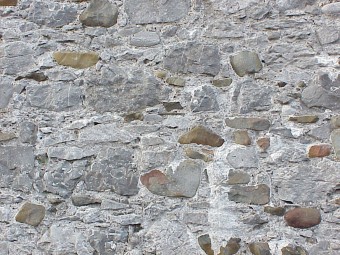 This type of wall is found more often in the East and North, though there are some pretty much everywhere nowadays around gardens. These are also often built of local stone, not from clearing fields but from stone quarried locally.

This is a style of wall also common in the north of England and in parts of France which gives a hint to its origin – they were mostly built by English or Norman settlers or on the instruction of English landlords, though later the practice was adopted generally in the areas where they made sense. This sort of construction originally came to Ireland with the Normans and is unsurprisingly more common in the areas where they tended to settle.

The stone typically used, usually limestone with granite also common, is more angular in shape than the farmer built walls and thus it is possible to make a more stable wall by carefully choosing the right stones and cutting or chipping them to size while the wall is being built.

These walls rely on strength and height for their effectiveness as a barrier. 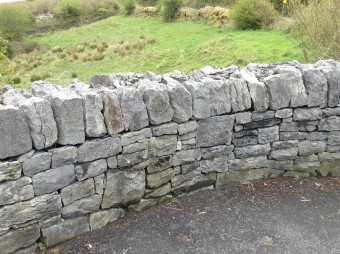 A vertical coping is primarily for stability but, if pointier stones are used, it also makes walls uncomfortable to climb and thus more secure. Both dry walls and walls with mortar often have a coping.

Stone masons will tell you that a properly made vertical coping creates a wall that is very stable indeed. As they worked those building the walls tended to set aside stones suitable for the top coping. They still do this today.

Sometimes the top layer is of very narrow stones flat stones, In the areas where you see this type of wall there is invariably local stone which either naturally occurs as or breaks easily into shale and flags. These stones are also commonly used as flooring in houses or on pathways and availability is the main reason it is used in walls.

However they are built, over time enough organic material will build up between the stones to allow plants to take root, giving the walls the appearance of being almost living things.

Why are Walls common only in Parts of Ireland? 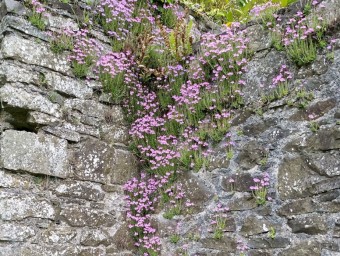 Dry stone walls as field division are rarely seen in areas where the soil is not so poor – so you will not see them so much in East Cork or South Tipperary or Co Meath for example, where ditches or dykes and hedges were and are the common way of dividing the much larger fields.

In these areas they are only found as walls around houses or at the boundaries of estates, where their function is largely aesthetic and the stone used brought from local, or sometimes even distant, quarries. These ones tend to be ‘prettier’ and more stable and to use mortar of some kind. 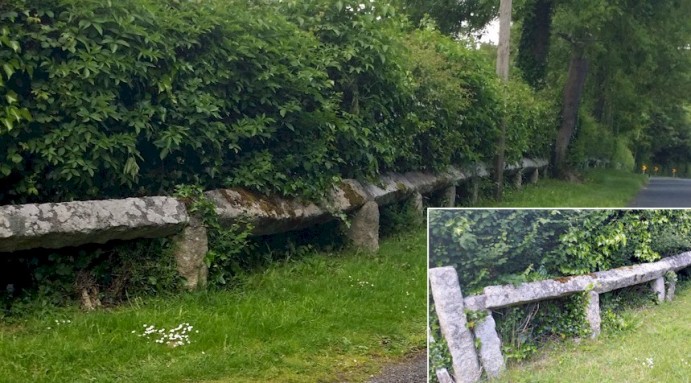 This is a type of low limestone fence unique to Co Carlow and (surprisingly, given its simplicity) not found anywhere else in the world. It is believed to have been first built the Watson family, a Quaker family who settled in Carlow during the Cromwellian plantations of the 1650s. The fences are purely decorative, being too low to confine livestock.

A Carlow fence consists of uprights with a triangular cut at the top which hold lengths of square cut limestone. There is no mortor. The pictures above were taken at Milford, not far from Old Leighlin, close to an old mill.

Recently new fencing was erected in Fenagh, a village in Carlow, using this style of fence, exactly as it would have been made in the past. Kudos to whoever made that decision, it’s very nice to see an old tradition living still and the fencing is very much in keeping with its surroundings. 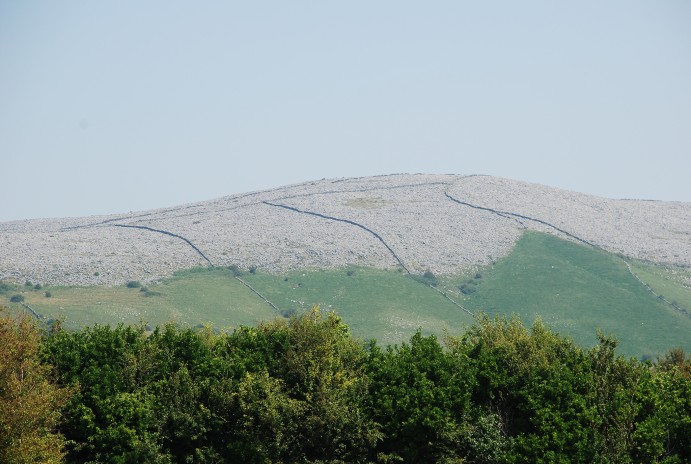 In the Burren in Co Clare people often comment on long stone walls which run from the bottom to the stony top of a mountain and appear to divide nothing from nothing.

They are known as ‘famine walls’ and were created by men employed on Work Schemes – usually run by church groups or by landlords – whose main purpose was to create employment for and provide income to the impoverished, often starving, local communities at the time of the potato famine.

The walls do indeed divide nothing much from nothing much. Their purpose, aside from income provision, was to clear the land of stones, the wall just nothing more than a place to put them.  In fact clearing these mountains of stone would be impossible, as is clear from the image above, so it was a thankless task.

The Great Wall of Mourne 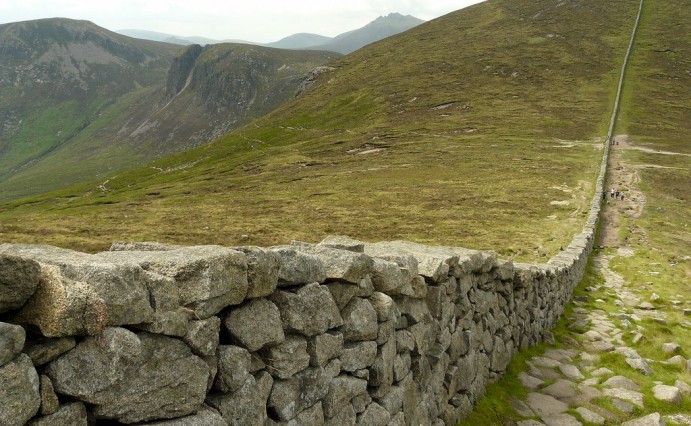 The so-called “Great Wall of Mourne” is often mistaken for a famine wall but is later, although the local employment it gave during construction was welcome. On average 1.5 meters high and about one meter thick and built from local granite it winds over 35 kilometres, crossing fifteen mountains. It took more than 18 years to complete, from 1904 to 1922.

Although it appears to have no purpose it was intended to enclose a water catchment area and prevent sheep and cattle grazing the mountain having access to it.

Where to see Stone Walls

There really is no need to make a special trip anywhere to see stone walls, you’ll find them!

However the locations on the map below are places where there are particularly large areas of stone walled fields. If you use the little street view man you can have a look!

A visit to Ceide Fields in Mayo is  particularly interesting because you can clearly see how our ancestors, more than 5000 years ago, also cleared stones and built walled enclosures in very much the same was as it is still done today.