Home » What to See » Odd & Unusual » The Wonderful Barn 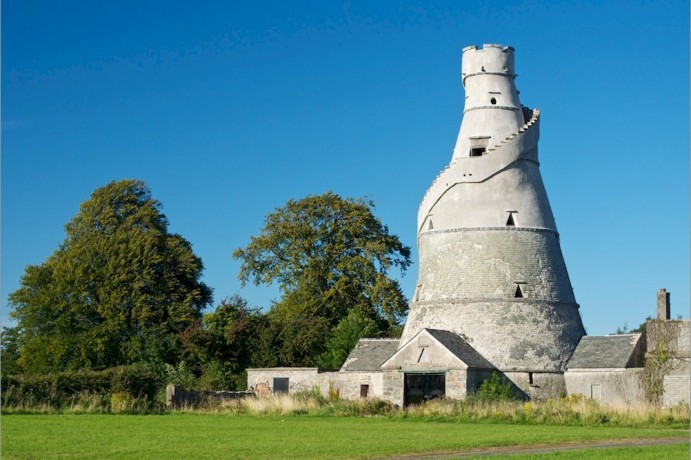 Built on the original grounds of Castletown House, this amazing and beautifully named building really is wonderful and well worth a post all of its own. 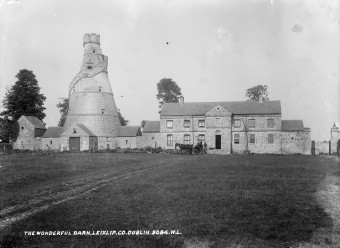 In 1740-41 extremely cold and wet weather which persisted for almost two years led to the failure of corn and potato crops, and a shortage of milk and meat as livestock starved. Known as the ‘Year of the Slaughter’ this famine resulted in widespread deaths from both hunger and disease. About 28% of the population of Ireland died, a far higher rate than in the famine a century later.

Appalled by the suffering during these years, Katherine Connolly of Castletown House commissioned the building of the barn, with two main purposes: to give employment to impoverished local people and to act as a store for grain which could be used should famine strike again. 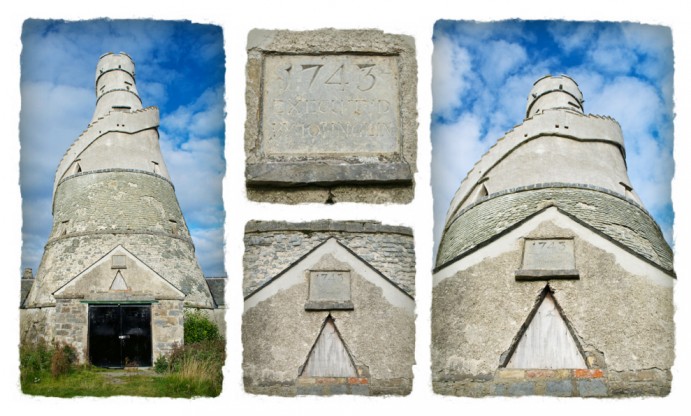 The design is said to be based on that of Indian rice stores, which members of the Connolly family would have seen on their travels to the sub-continent. An external cantilevered stone stairs winding around the tapered external wall gives the barn its amazing corkscrew appearance – there are 94 steps leading to the 70 feet high top.

Inside there are vaulted brick walls, covered with rubble stone, reaching up through seven floors, with a central hole running through each. Small triangular windows open at intervals on some levels, reflected by similar triangular motifs elsewhere.

More than just a barn 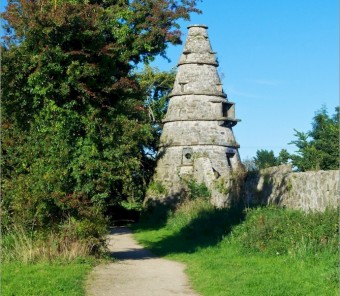 There is occasionally suggestions that this was never intended as a barn at all.

However the timing of its construction, the central hole that runs through each of its floors and several other features confirm that this was indeed intended as a barn or a grain store.

There are theories that it was either a dovecote or an elaborate hide from which shooters could take aim at game or at least was used for one or other of these purposes at some point in its history.

Perhaps some of these are just confusion, because there are in fact two dovecotes built in a similar style into the wall surrounding the barn. Much smaller in size these too are quite wonderful buildings.

The barn was built in a location that formed the end of a vista from the east facing windows of Castletown house, so its unusual design supports the idea that it had a secondary function as a type of folly, for the residents of the house to enjoy looking at from afar. This would explain why it wasn’t just built as a standard dull barn building.

The large building attached to the barn is Barnhall House, probably originally staff accommodation for the Castletown estate, was added a few years after the barn was built. 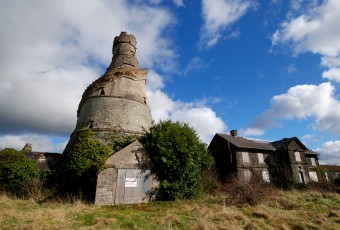 It is really a mystery to me why this lovely building was not long ago restored and (properly) opened to the public. Instead it was allowed to fall into dilapidation, the surroundings became overgrown and there was absolutely no encouragement for anyone to visit it. This neglect led the area to be used as a location for casual drinking and the buildings were extensively vandalised.

There are people trying to change this.

Through the work of the Irish Georgian Society the building was placed on the World Monuments List of 100 Most Endangered Sites in 2006. In 2005, as part of the planning permission when the nearby housing was built, the barn became the property of Kildare County Council, and they have done some work to prevent further decay and cleaned up a lot of the overgrowth.

The council have used part of the surrounding area to provide allotments, which at least brings poople into the barn area so it is not deserted, and has plans to create a park here with the barn as its centerpiece. However there are no funds currently earmarked for this purpose, so for now it remains a somewhat forlorn sight. 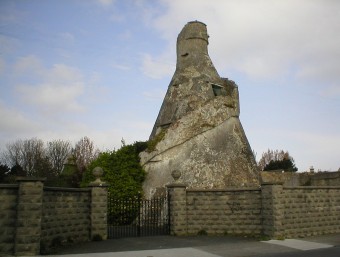 Inspired by the barn at Castletown, a Major Hall built a smaller copy known as Hall’s Folly or the Bottle Tower, adjacent to his (now long gone) house on Whitehall Road in Rathfarnham. It too has a small similarly shaped dovecote nearby.

Whether it was originally intended as a barn or a residence when it was built in the 1740s is unclear, but from 1778 it was the residence for a time of Rev. Jeremy Walsh, a curate in the nearby parish of Dundrum, and in 1795 was converted into a boarding house. It has been empty for about 15o years and is in a state of advanced ruin.

This requires some effort, it is not signposted at all and the barn is now sandwiched between a motorway and a modern estate and can no longer be reached from Castletown House. Instead you need to look for a gate leading to allotments on Celbridge Road, which is marked on the map below. Click the icon for directions.