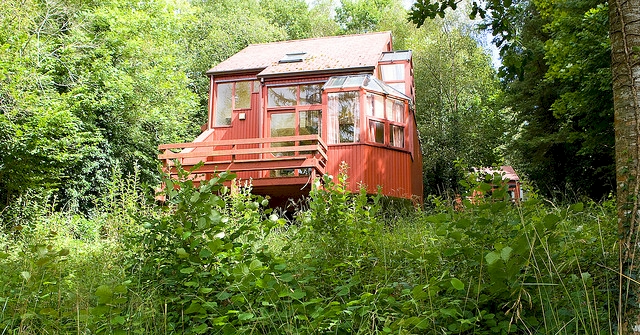 Covering around 600 acres of some of the most scenic scenery in Co Cavan, Killykeen Forest Park lies on the shores of Lough Oughter, part of the River Erne waterway.

There are many signposted walks along the lake shore and through the woods and the lake is very popular with anglers, who fish primarily for pike, bream and perch. It is also home to a huge variety of water fowl and birds, especially mallard, tufted duck and, in the winter, wigeon and pochard.

The park is owned by Coillte, Ireland’s Forestry Board, and has been largely planted with kind of boring evergreen trees, making the woodland walks a little dull. Stick to the lake for a more pleasant stroll. 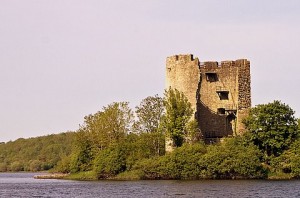 The romantic looking Oughter Castle stands on a island on the lake looking forlorn but interesting, and it has had a very interesting history.

It dates back to the early 1200’s, when it was built by the O’Reilly clan, then as now one of the foremost families in the area. They lived there for over 300 years and the building served them as home and fortress.

When the English crown sought to quell dissent in the area by sending in loyal planters in the early 17th century, the castle and its surrounding lands were granted to a Captain Hugh Culme. He didn’t live in the castle, but instead built a house on the lake shore.

However he ended up in the castle anyway. During a rebellion in 1641 the castle was retaken by Irish rebels and the good Captain became a prisoner in his own castle.

Among the Irish rebels who used it as a prison was Owen Roe O’Neill, who died while staying there, allegedly poisoned by agents of the English court.

The castle has been a ruin since it was raided by Cromwell in 1653, and is accessible only by boats, which can be hired locally.

Sad tale of the Chalets

In an innovate move Coillte built a number very beautiful self-catering chalets dotted though the woods in Killykeen, seen in the image at the top of the page (by Gerard Lovett).  These were very popular with both families and those looking for a place to get away from it all.

However they are no longer available for rent, and both they and their surroundings are starting to become quite unkempt – they really look unloved at the moment. This is a great shame, and while funding to renovate the chalets and bring them back into use were mooted recently, there does not seem to have been any progress on this.

Although only remmnants of this ancient tomb remain, it is in a lovely location and there is something rather magical, even spiritual, about it.

Court tombs date back about 5000 years and were flat rooved structures that served as graves and were often surrounded by small walled ‘courtyards’, hence their name. Presumably the served as burial places for important figures as they would have take quite a bit of work to create. They often, as here, come in pairs, usually sharing a large stone at the back. However the ones in Killykeen are about 12 metres apart, which is quite unusual.