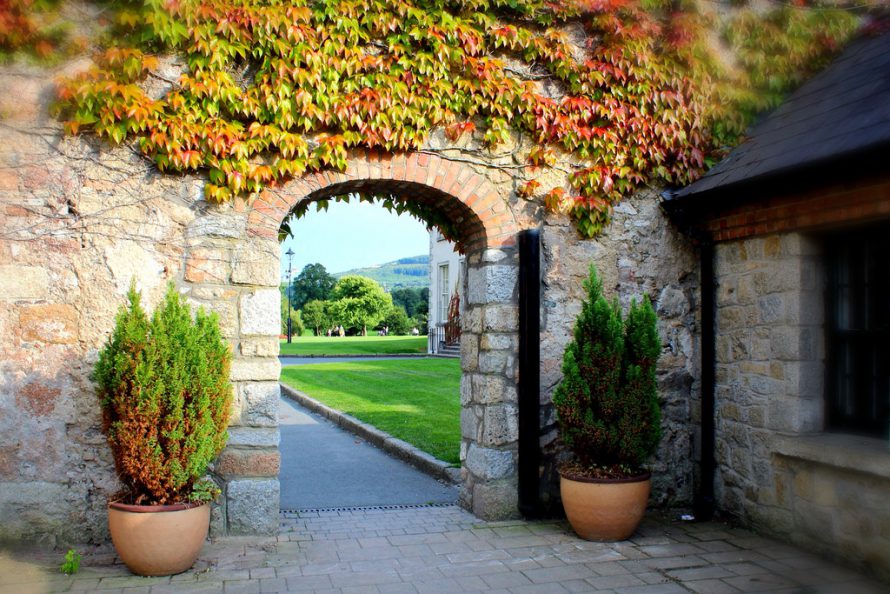 On a sunny day in Dublin Marlay Park is buzzing with visitors picnicking on the grass, walking the forest trails, taking the kids to the playground, wandering the gardens and generally enjoying one of the best suburban parks in Dublin. While not as huge as the Phoenix Park, the 300 acres of woodlands, gardens and riverbanks mean there is plenty to enjoy, and for kids in particular it’s a wonderland. 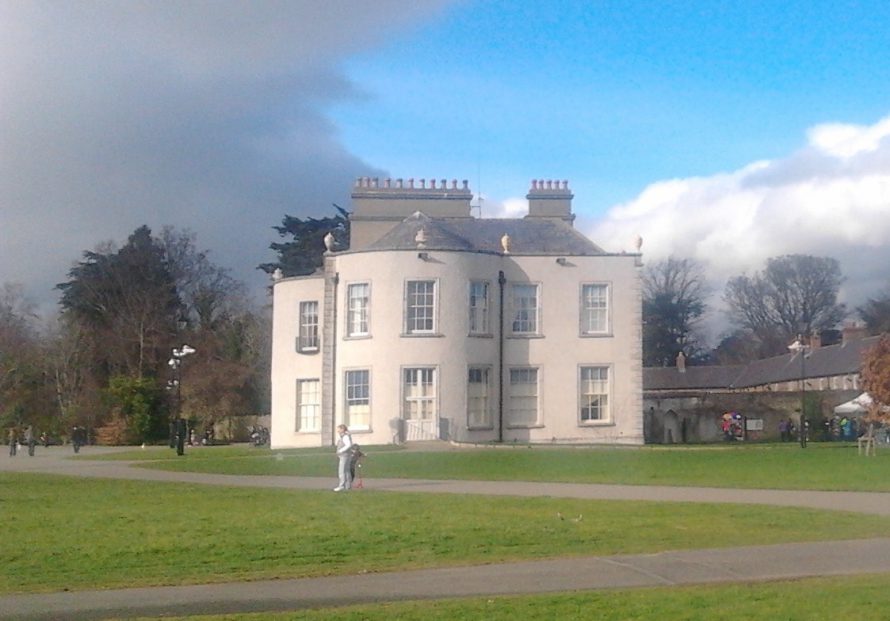 The original house, known as The Grange,  was built by Thomas Taylor in 1690 and was a more modest building than the one standing today. In 1764 the house and the surrounding walled estate were bought by David la Touche, who set about extensive renovations and extensions to create what is one of the best Georgian houses in Dublin.

A member of a prominent Huguenot familyy, David la Touche was immensely wealthy. One of the driving forces behind the establishment of the Bank of Ireland, where he served as its first governor, his family had extensive business interests primarily in the textile industry and owned huge tracts of land both in Dublin and elsewhere in the country. He was involved in politics too, serving as Member of Parliament for Longford and Dundalk.

No money was spared on the upgrade of the house. A ballroom with views of the Wicklow mountains, a private theatre and a lovely oval music room were among the additions and the best craftsmen in Europe were engaged to work on the interiors. Outside ornamental and kitchen gardens were established,  woodlands and park lands were planned and planted to create the basis of the park as it’s seen today.

He renamed the house Marlay House after his wife, Elizabeth Marlay, and it became a fixture on the Dublin social calendar, with balls and music recitals attended by the great and the good, and regular private theatrical productions featuring top actors of the day. 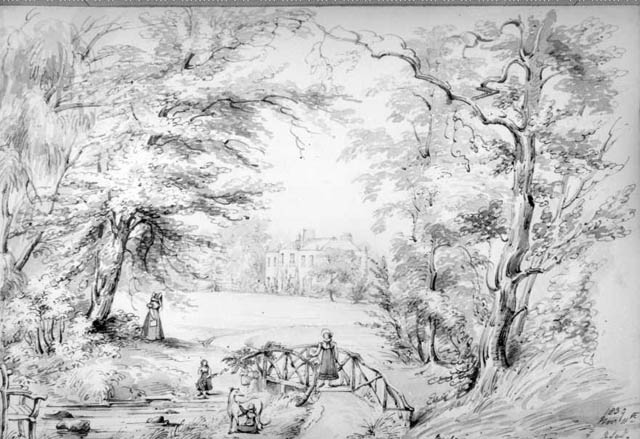 Sketch of Marlay Park in the la Touche days

The la Touche family remained at Marlay Park until 1864 when the house was sold to a Dublin coal merchant, Robert Tedcastle. In 1925 it was purchased for £8,325 by Philip Love, a market gardener who’s family donated the estate to Dublin County Council in 1972, when it became a public park.

The house is now used regularly for meetings, lectures and even, as in the old days, occasional recitals and social events. It is open to the public and there are free guided tours. 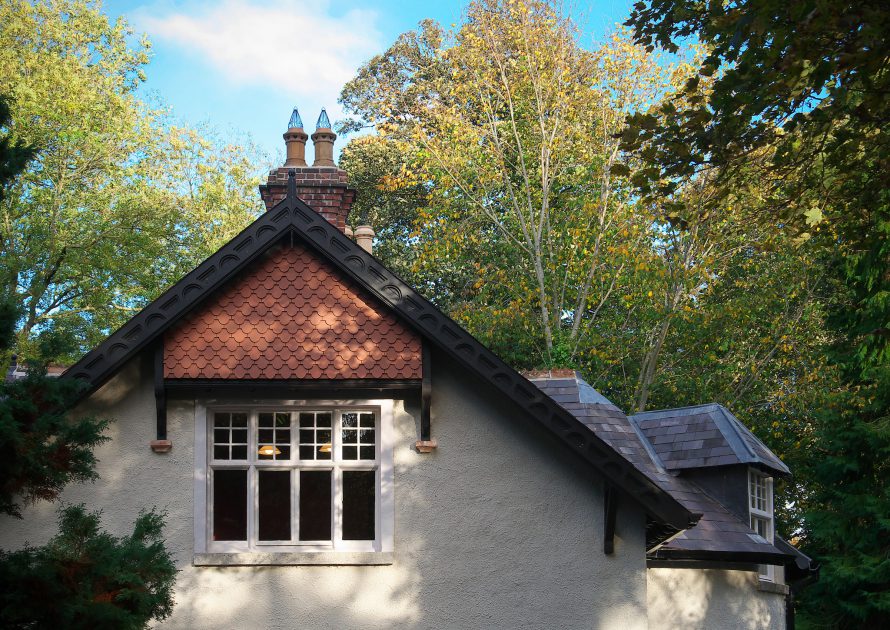 A second interesting house at Marlay is Laurelmore, a two storey thatched ‘cottage orné’  built in the gardens by the la Touche family. Such cottages were popular among the wealthy at the time, not designed to be lived in but built in a rustic style as a sort of playhouse,  used as a charming backdrop for picnics, for small music recitals or for playing cards.

The more practical Robert Tedcastle extended it, replaced the thatch with a slate roof and used it to house his estate manager. Subsequently let out to a series of tenants, it was lived in until the the hand over to the county council, after which it was allowed, sadly, to fall into disrepair. This was remedied in 2015 when an extensive and careful renovation, using many original fixtures and furnishings from the 18th century, returned it to its original glory.

Laurelmore is now houses the offices and library of the Royal Horticultural Society of Ireland, and is also used as a base for gardening courses run by the society. It is only occasionally open to the public, but you too can now have a picnic in its shadow!

The most famous and popular garden is the 4.5acre walled garden. The ornamental garden was restored in  the early part of this century, with herbaceous borders and shrubs are to the fore and using plants that were popular when the garden was established. In the kitchen garden  The beautiful orangery, with it’s restored wood paneled ceilings and large arched windows, is used as an exhibition space. In the kitchen garden there are regency fruit trees and vegatable beds, clearly meant to serve a practical purpose but also beautifully arranged so as to be in its own way ornamental also.

The entrance to the gardens is through the old Gardener’s Cottage, which has a really excellent restaurant – its well worth planning to stop for lunch here. The gardens are also home to some peacocks who are remarkably unphased by the crowds and seem to almost pose for visitors photographs – though kudos to Will Grant for this shot.

Every Saturday and Sunday there is a hugely popular farmer’s and craft market in the garden courtyard, which is also permanent home to some very high quality craft workshops and a great place to buy unique hand crafted gifts.

There is also a lovely naturalistic garden behind Laurelmore, which is a particularly pleasant place to sit and rest on a summer day.

Things to do at Marley Park

For adults there are the craftshops and gardens and plenty of lovely walks as well as the enjoyment of the lovely surroundings. There are pathways and woodland walks to suit everyone and eon Saturday morning at 9.30 you can join a 5K run. The more ambitious tcan set off on The Wicklow Way from the North car park, a way marked walk that winds for 127km through the Dublin and Wicklow mountains to Clonegal in Carlow – though that’ll take days!

It’s for children that the park comes into its own. Aside from huge grassy areas to run around and woods to explore, the playground is one of the largest and best (and busiest) in Dublin. It’s zoned for different age groups and has plenty to keep kids of all ages busy and happy. In summer there is a pet farm behind the house and a climbing wall beside the coffee shop to keep the small people busy while you relax.

For a quieter but totally magical experience cross the Japanese Bridge over the Dargle River, walk past the waterfalls and into the woodlands. There you’ll find the secret Fairy Tree, with its turrets and towers, little shuttered windows and carved doorways. It’s beautiful and mysterious and kids just love it.

If you are visiting at weekends especially head to the playing fields, where you’ll have a chance to catch a GAA football or hurling match.

Marlay Park is a well used location for outdoor concerts and, though they are not universally welcomed by surrounding residents, the large grassy area behind the house which can hold up to 30000 people is a fabulous venue. On concert days all or part of the park may be closed to visitors so check in advance before visiting.

There are two car parks in the Park, the main car park off College Road, for the house use the Grange Road entrance. Entrance is free and during the summer there are also worthwhile free tours of the house and gardens.

A particular good example of Ireland Norman castles, Cahir Castle has been well …

Have you something to add about "Marlay Park"?