Nestled by a river among rolling hills, the little town of Inistioge is a favoured romantic hideaway for many Irish people and those who discover this special place tend to be drawn back again and again. It’s a small pretty village, somewhat off the beaten track, where little has changed for generations and the modern world seems very far away indeed.

The movies “Circle of Friends” and “Widow’s Peak” were both made in the village, bringing such stars as Minnie Driver, Mia Farrow, Chris O’Donnell, Adrian Dunbar and Joan Plymouth to town.

Mary Tighe, who lived at Woodstock Estate, published in 1805 a version in translation of the 2nd century poem “Cupid and Psyche”, called “Psyche, or the Legend of Love“.

It is rather turgid stuff to the modern ear, but was extremely popular in its day, ran to 6 editions and won the admiration of, among many others, the poet John Keats. For now, a short extract may get you into a romantic mood!

“His tears are softer than the April showers,
White-handed Innocence supports his throne,
His sighs are sweet as breath of earliest flowers,
Affection guides his steps, and peace protects his bowers.”

Mary Tighe was buried in St Mary’s Church in Inistoige where there is an effigy of her in the tower.  On a recent trip to Italy I came across a statue of her in the Galleria dell’Accademia in Florence, to my enormous surprise and great delight. 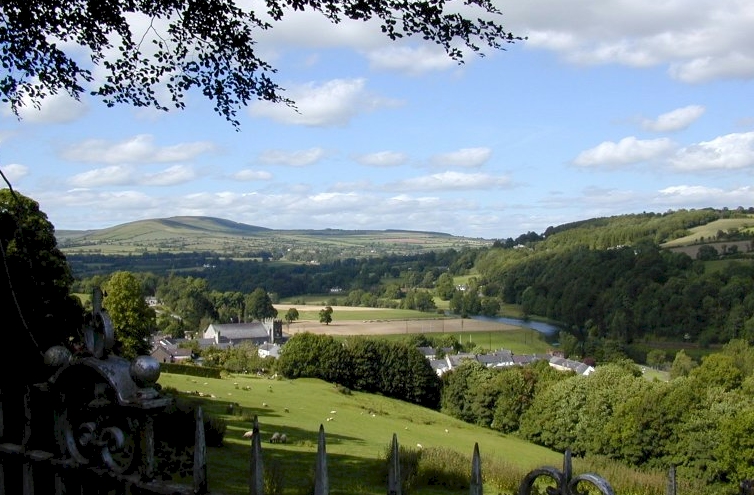 Inistioge from Woodstock by Steven Tan

The River Nore winds through the village and the surrounding countryside and a has riverside footpath. The best views of the river and the valley are from Woodstock Estate, high on a hill above the village.

The remains of Woodstock House are a stark reminder of a rather inglorious period of Irish history, when during and after the Irish Civil War many great old house were burnt to the ground. 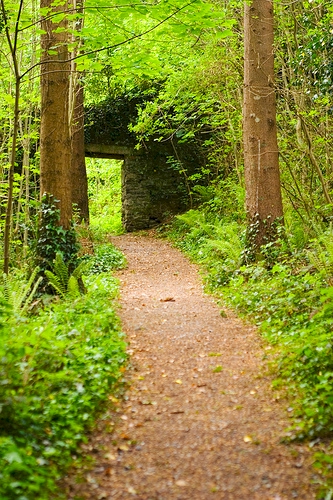 The estate covers about 1000 acres including 50 acres of gardens, and has splendid walks. The gardens and woodland walks were created between 1840 and 1900 and as well as native species contain many exotic plants from Asia and South America.

There has recently been quite a lot of restoration work carried out on the gardens and it is a wonderful place to explore at any time of year. Look out in particular for the Monkey Puzzle walk and for the lovely old dovecote.

St. Mary’s is a pretty church in the centre of the village parts of which date back to the 13th century. The ruins of a 14th century merchant’s house overlook the tree lined village square and there is a nice little garden there where you can sit and watch the world go by. On a rock above the river are the remains of a Norman motte and bailey castle.

Kilkenny is nearby and a good day out, with its castle and meandering streets and lanes. But really, Inistioge is mostly about relaxing and not doing very much at all.

At the Gate Lodge at Berryhill, just outside the town, there are wonderful views over the fields to the river below, and open fires to curl up in front of in the evenings. The Woodstock Arms, in the village, is a nice pub with good rooms overhead.

The Woodstock Arms, Lenihan’s and O’Donnell’s are all good and friendly pubs.

Inistoige is about halfway between Kilkenny and New Ross in South East Ireland.