Home » What to See » Scenic Places » The Burren

At first glance this vast limestone plateau can seem a bleak and barren place, with its rocky terrain and its bare hillsides. But everyone notices at once the strangely mystical quality of the landscape and with a little guidance and observation the real wonders of this extraordinary place become clear.

A surveyor in the 1600’s apparently despaired of it having any value when he described it as:

“A savage land, yielding neither water enough to drown a man, not tree to hang him, nor soil enough to bury”

Although the Burren looks harsh and inhospitable, especially in winter, the climate, soil and conditions allow an amazing array of plants grow, many common but others, such as rare species of wild orchid and many alpine plants, not found anywhere else in Ireland.

There are huge areas of uninhabited land now but in the stone age it was widely settled. The remnants of the ancient peoples who lived there then are visible everywhere in a rich store of megalithic remains.

The Geology of the Burren 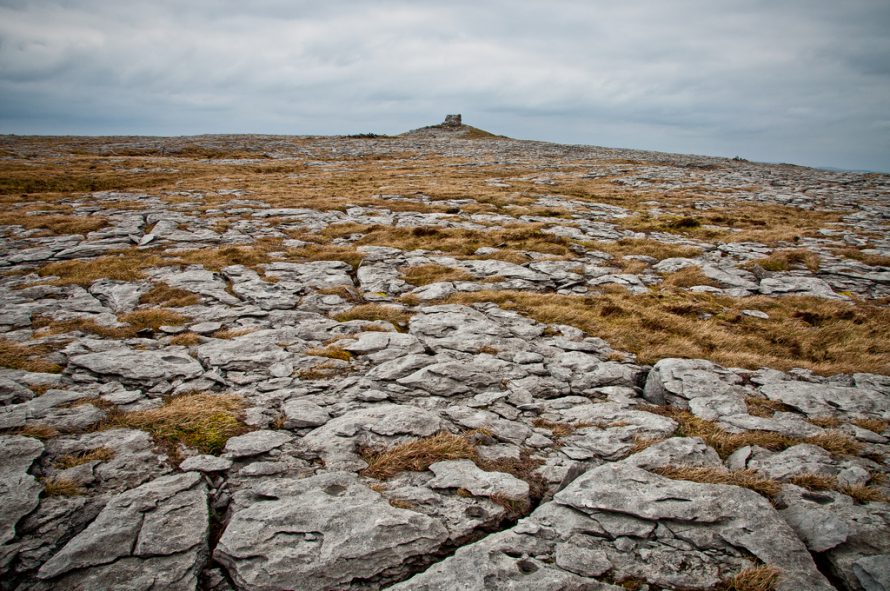 350 million years ago this part of the world was covered by a great ocean, its waters teeming with marine life.

By the time movements in the earths crust thrust the sea bed above the water, it had become limestone, formed partly from millions of years of shell, coral and bone which had settled on its surface and been compacted with mud and shale.

Limestone is water soluble, so rainfall and ice caused erosion and resulted in parts of the surface dissolving, gradually creating the cracks and crevices (known as grykes) that create the pavement like surfaces (known as clints) which are a distinctive feature of the Burren.

As water penetrated below the surface limestone it eventually met deeper harder rock which was not soluble and was forced to move sideways rather than down. This process created the massive system of caves and underground rivers which lies beneath much of the Burren today.

The most accessible of these caves is Ailwee Cave near Ballyvaughan, where there is a visitor centre and guided tours of parts of the cave are available – well worth visiting for a glimpse of what lies hidden beneath the Burren’s surface.

It also has some pretty wonderful stalactites and stalagmites, those on the left are known as ‘the carrots’, and in winter especially water can be seen rushing through fissures from the surface.

In some areas the roofs of large underground caves collapsed, creating shallow basin like depressions on the surface, known as turloughs. In the dry Summer these look little different than the surroundings terrain, but in winter they fill with water, becoming temporary lakes.

Plant & Animal life on the Burren 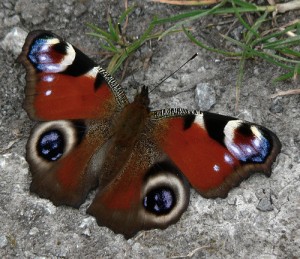 Between May and August each year the blue-grey pavements of the Burren are tinged with bright colour as an amazing array of flowers burst into bloom.

Gentian, Cranesbill, Rock Rose, Mountain Aven, Orchids and many other species grow in the fissure between the limestone. Most are tiny flowers, but their abundance is such that from the distance the hills take on a violet tinge during the summer months.

Trees are a rarity, only the odd stunted Holly or wind twisted Hawthorn and the occasional Blackthorn can survive.

This abundant growth attracts many bird species and, especially, butterflies and there are more than 25 species of butterfly found fairly commonly. The areas is also home to foxes and badgers and to herds of wild shaggy goats. But the most common animal species by far is the hare, and you are unlikely to spend a day on the Burren without seeing at least one streak across the pavements in front of you.

The History of the Burren 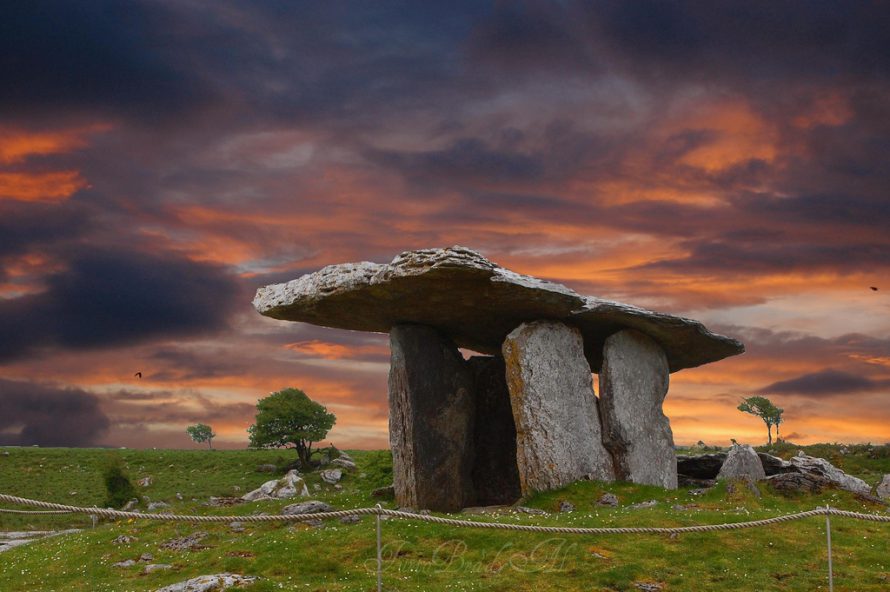 People have inhabited this part of Co Clare for more than 5000 years, though when they arrived they found a much different land, a great forest covered the hills at this time, which they began to clear to allow farming.

They left their mark in the shape of Dolmens, like the famous one at Poulnabrone, which were probably burial places.

Certainly this was the function of the later wedge and portal tombs, built around 1500 BC, of where there are several examples in the area.

Even more numerous are the Iron Age ring forts – there are several hundreds of these scattered around the hillsides of the Burren, testimony to the populous nature of the place at that time.

For a long time after the clearing of the forests these were rich lands, with abundant growth in the thick humus which covered the limestone. However time, grazing and erosion took their toll and the result was the washing away of the fertile top soil exposing the limestone below.

By the 15th century the population was still high, but very poor, living for the most part in rough wooden cabins with only the occasional castle or tower house, such as Lemenagh Castle.

The 19th century saw a population dependent on their existence on whatever little they could manage to grow in what was  by now a truly difficult environment. They were ill prepared for famine, and when it came they died or abandoned their home in droves.

Here and there in the Burren you will see a long wall on the rocky hillside, apparently dividing nothing from nothing. And that is what they do.

These are famine walls, built by local workers recruited into work schemes largely funded by philanthropic organisations as a means of providing an income for the starving locals.

Victorian sensibilities forbade the giving of handouts, and this was their way of helping to stave off death for at least whose lucky enough to be employed at this somewhat pointless task.

The Burren Today – a Fragile Balance

After the famine the Burren was inhabited only by a few farmers at its periphery, a situation which still persists today. The land, though poor, was mainly used as commonage, with farmers given rights to graze animals on it without having ownership.

Over the years there have been concerns that over grazing would destroy the delicate balance of nature and in particular the remarkable flora. However recent research has shown that at least a moderate level of grazing is required to keep it in its current state.

This is not really surprising – remember the forests of 5000 years ago? It was farming that removed them and created the Burren as we know it today. Left to itself it would revert to forest, with undisturbed growth leading eventually to a build up of a new soil covering and restored fertility. So the farmers who long fought against misguided attempts to have their animals banned from the hills turned out to be right and continue to have grazing access, albeit in a strictly controlled manner.

The main threat to the Burren today comes not from grazing sheep and cattle but from people. 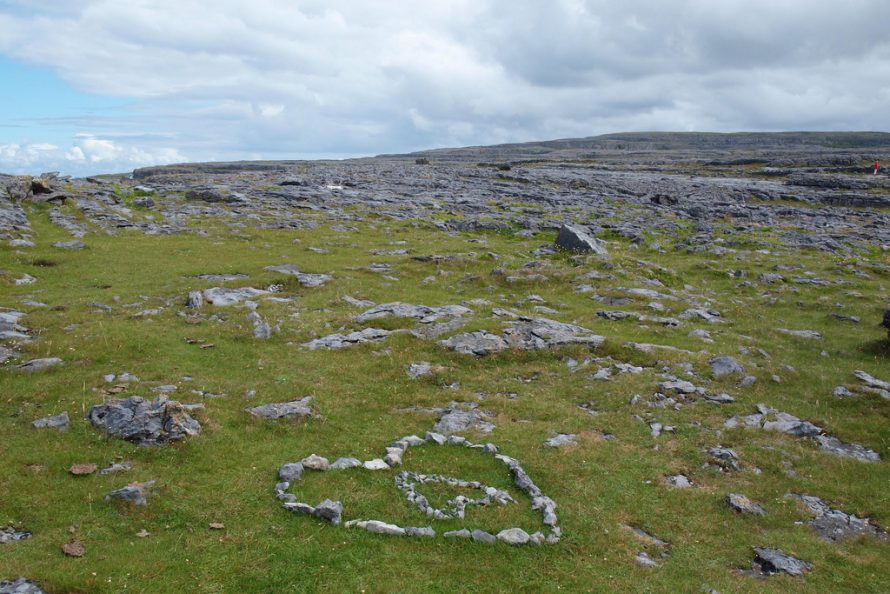 Huge numbers visit each year, walking in their thousands over parts of the pavement. Most people don’t mean to cause harm, but still, many do. They move stones to make their own ‘megalithic monument’ or just a photogenic arrangement and not all obey the laws which forbid removal of plant material.

The story is told of a teacher attending a summer course who picked an unusual little flower and brought it to the course leader for identification. The horrified leader confirmed that it was a rare orchid which flowers – and therefore produces seed – only about once every 20 years.

That is not to suggest for a moment that you should not visit, please do, but be respectful of the environment and conscious of your role in ensuring it is persevered for generations to come.