Home » What to See » Scenic Places » The Cliffs of Moher 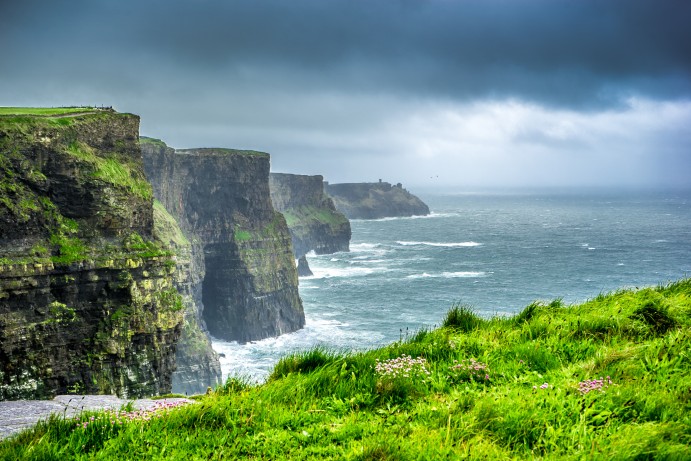 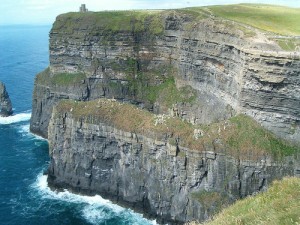 Cliffs of Moher, photo by sedoglia

The Cliffs of Moher are consistently at the top of Ireland’s most visited places and for the most part deservedly so.

Over 700 feet tall at their highest point, the shale and sandstone cliffs drop almost vertically to the Atlantic ocean far below.

From the top there are views, on a clear day, to the Aran Islands and Galway Bay, the Maum Turk and Twelve Bens mountains in Connemara to the north and Loop Head in Co Clare to the south.

Visitors are almost invariably left with a sense of awe and the realisation that they are really very small and insignificant.

Tourism and the Cliffs of Moher 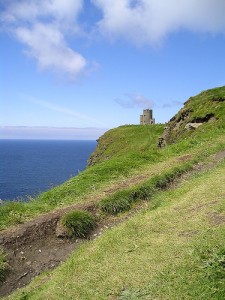 The small castle-like tower at the top of the cliffs was built in 1835 as a viewing point for the many tourists who came here as part of their ‘grand tour’ of Ireland in Victorian times.

It was built by Cornelius O’Brien, who made a tidy profit by charging an entrance fee for those wanting to climb to its top for a ‘better view’, although in fact the view is pretty much the same as the one you see from the ground.

And it is those views and the sheer grandeur of the cliffs that have kept visitors coming over the decades since, to this wild, remote and beautiful place.

A massive interpretive centre has been built at the site, at the whopping cost of €31.5 million euro! About two weeks after it officially opened, in February 2007, we went along to take a look and while we found it quite impressive – albeit with some reservations – it still seems like a somewhat pointless intrusion on what should be simply a visit to an elemental place.

Until recently you could drive to the cliffs, pay a modest charge to park and walk along the cliffs, which is basically what most people want to do.

Car parking now costs €8 which seems on the pricy side, especially given the additional charge of €4 per person to the ‘Atlantic Experience’ in the Visitor Centre itself, although entrance to other parts of the visitor centre is free.

Everything, and I mean everything, is now designed to part visitors from their money. You can even become a benefactor – for a mere $5000 you get your name on a paving stone, for $350,000 a viewing platform will be named after you.

According to the brochure you will be contributing to “the preservation of a major piece of Irish Heritage“. Is landscape heritage?

However the stated aim of the owners of the centre (Clare County Council) is a bit different: “to ensure that the county derives additional economic benefit from the presence of such an attraction“. In other words – get the money. And oh the total dedication to that cause is obvious.

If you want to make a donation to a heritage cause, consider instead the Irish Landmark Trust. 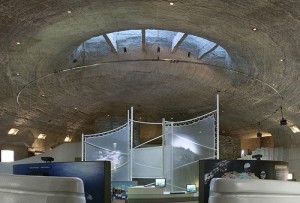 Inside the visitor centre, photo by IrishFireside

The centre is really very well built and integrated into the landscape even in its unfinished state and you can visualise how much better it will be once completed.

It’s a beautifully constructed space inside and it has very good disabled access, good clean bathrooms and although not quite finished when we arrived looked very well. There is a coffee shop and a restaurant. We had lunch in the latter and it was very good, plus the view over the cliffs from its windows are spectacular.

There is also of course the inevitable gift shop, selling the same overpriced stuff as most tourist gift shops do.

That’s what they bill it as now – “The Cliffs of Moher Experience”.

In truth, the Cliffs of Moher has always been an experience, an adventure even. That is why millions of visitors have made their way there for hundreds of years.

It still is, but it’s a different experience now. Safely indoors, you can see audio-visual presentations about the geology, fauna and flora of the cliffs, even have a simulated multi-screen virtual reality experience of standing on the cliffs on a sunny day. Cornelius O’Brien would admire the cheek of that, but then again the weather around here is often pretty filthy so at least if you visit on a bad day you will get an idea of what it is like out there.

A lot of it is a bit pointless though. The interactive computer stuff wasn’t that interesting even to the kids with us and the presentations at times took themselves way too seriously. Much of the content is really just big photographs of what you can see outside.

There is a strange sense that actually going out on the cliffs is now something of an optional extra, but out we went just the same.

Climbing to the top along the old narrow path you felt you were pitting yourself against nature, leaning into the wind, looking down from a huge height at the crashing waves of the Atlantic and, on a clear day, marvelling at the seemingly endless views. It was wild, elemental, exhilarating.

It was also dangerous. People, including tourists, have died falling over the edge. 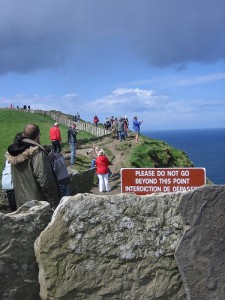 Visitors wandered at will, often putting themselves at some risk. And it was totally inaccessible to those with reduced mobility.

The walk to the top is now carefully paved, quite unobtrusively walled and safely set back from the edge. There is a ramped path that gives wheelchair access to the path and to well sited viewing platforms.

I thought the paving and walls would take from the walk on the cliffs, but honestly they don’t. And certainly on the day we visited it was still as wild and wonderful as ever.

The buskers who once lined the old pathways are gone, which is a pity, but although the stall holders who once also lined the paths have made a bit of a stink about being moved out in my opinion they are little loss – most sold rubbish anyway.

Our Verdict: Should You Visit? 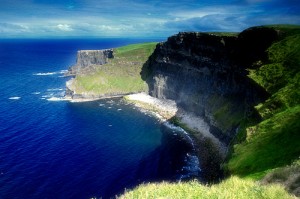 A stunning photo of the cliffs by atomicpuppy68

Once we would have said the Cliffs of Moher were a definite ‘must see’, now it’s less clear cut. It is now a much more commercialised, more sanitised experience. If crowds of tourists bother you, then you may not enjoy it. If you like your nature straight and unfiltered you may hate what has been done here.

But it is still a beautiful place.

If you have been there before expect something very different on a revisit. I admit to preferring the old ‘experience’, I cannot rid myself of the feeling that something indefinable has been lost, but acknowledge that the new set-up is probably necessary at this point.

If you have never been before then all that is irrelevant – it’s worth seeing, you should go. But we recommend that unless the weather really stinks you should skip the Atlantic Edge bit and save your money on that. It really adds little or nothing to a visit.

Location Map for Cliffs of Moher

An architectural gem, this folly was built as a garden pavilion for James …