Home » What to See » Scenic Places » The Giant’s Causeway 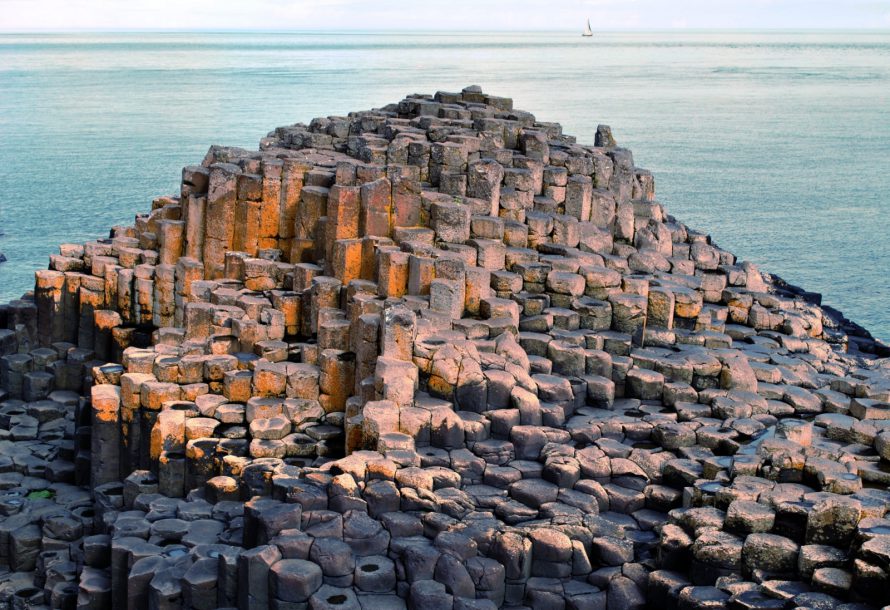 The extraordinary rock formations of the Giant’s Causeway on the North Antrim Coast have been recognised as a World Heritage Site and each year draws many thousands of visitors to the area. Few are disappointed – it truly is a remarkable place.

The causeway is made up of thousands of perpendicular polygonal basalt columns, mostly hexagonal in shape, tightly packed together. While the columns are mostly six sided, there are many 5 and 7 sided ones and fewer with 4 and 8 sides.

They range from huge columns that soar 40 feet or more into the air at the back of the causeway to low ‘steps’ leading into the ocean at the front, with many arranged in a sort of stepping-stone fashion in between. There are more than 40,000 columns in total, stretching along two miles of coastline.

The initial reaction of most people on seeing the Giant’s Causeway for the first time is that someone
must have ‘made’ it – the columns look more like man-made structures than the natural phenomenon that they actually are.

How the Giant’s Causeway was Formed

In this part of Ireland there once lived a generally mild-mannered giant, Finn McCool, who was goaded mercilessly by insults shouted across from Scotland by another giant called Fingal. Incensed, Finn determined to cross the Irish sea to Scotland and deal with his rival. He began to take rocks from the shore and put them into the sea to create a pathway on which to make the crossing.

This was exhausting work and by the time he finished the pathway Finn was too tired to cross it and fell into a deep sleep. While he was sleeping his wife, Oona saw that Fingal was approaching over the path. Alarmed by his huge size and aggressive demeanour, she thought quickly and threw a blanket over the sleeping Finn. 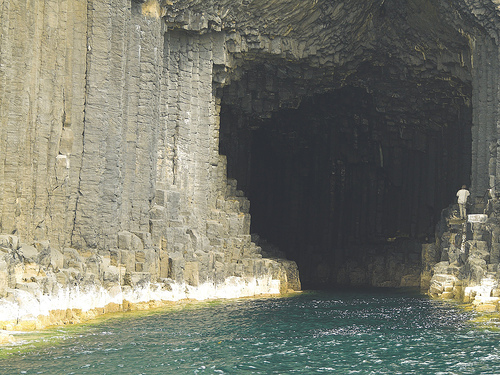 As Fingal approached she raised a finger to her lips “Shh” she said, pointing to the sleeping figure under the blanket, “Don’t wake the baby“.

Terrified at the prospect of fighting the father of such an enormous child, Fingal fled, tearing up the pathway as he went and digging a cave in which to hide out once he got back to Scotland.

To this day you can see the remains of Finn’s pathway both at the Giant’s Causeway in Northern Ireland and at Fingal’s Cave (pictured) on the Island of Staffa in Scotland – the middle section was, of course, destroyed during Fingal’s retreat.

At least that is one theory on how the causeway formed! 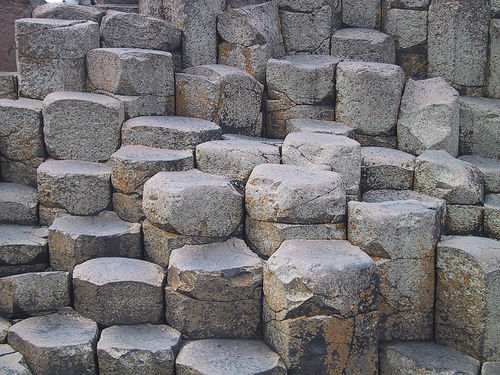 Columns at the Causeway by dps

The more likely explanation is geological, that the basalt rocks of which the Giant’s Causeway is comprised were initially formed as a result of a volcanic eruption which occurred about 60 million years ago. The different levels of columns seen today formed as a result of three successive periods of eruptions.

The polygonal columns were created by a geological process known as ‘columnar jointing’. As the molten lava from the volcanic eruptions cooled, it would initially have had the familiar appearance of dry cracked earth on its surface. However the lava was deep, and as the areas below the surface slowly cooled and solidified the surface cracks moved gradually downwards, creating deep fissures.

Some 35 million years after the eruptions this area would have been covered in ice, and water which entered the fissures between the columns expanded as it froze, widening the fissures and, in many cases, cracking the rocks. Some collapsed, pilling up angular debris. Others shifted and moved, some being pushed upwards by the expanding ice. These effects of the ice age plus millennia of erosion due to water moulded the rocks into the shapes we see to-day.

The ‘Discovery’ of the Causeway and the Start of Tourism 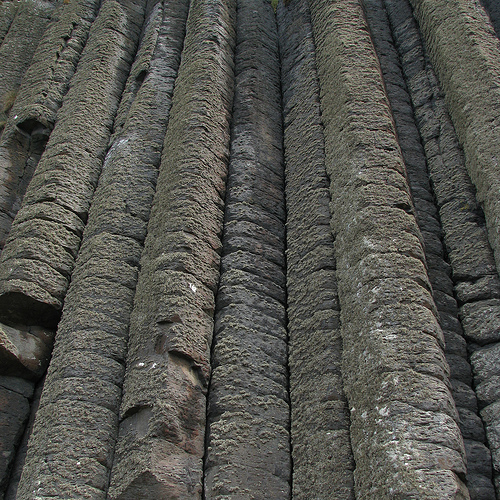 The Organ Pipes, by kyz

In 1693, in a paper delivered to an audience at the Royal Society in London, Sir Richard Bulkeley of Trinity College in Dublin announced with due solemnity the ‘discovery’ of the causeway. This of course is city-centric nonsense – the area around here has been inhabited for thousands of years, so it was certainly ‘discovered’ prior to this date by lots of people!

However from about that time it has been a place that people come long distances to see. In Victorian times it was an essential stop on the ‘grand tour of Ireland’ and debate raged as to how the causeway had formed, and for a time the prevailing view was that it was created by man.

Not everyone was impressed: the novelist Thackeray famously remarked that getting there was “a lot of bother just to see a pile of stones“!

In 2009 a new visitor centre, built to a remarkable and sensitive design by Architects Heneghan Peng, will open, and will be very much welcomed. It is a very beautifully thought out design, providing faculties and background information to those who want them while not over commercialising a visit to the causeway or intruding on the natural beauty of the place.

Until 2009 a small temporary centre is available at the site. It is open all year round, but given that the causeway coast is very exposed it is often neither safe nor practical to explore it in poor weather.