Home » Ireland & the Irish » Facts about Ireland » Religion in Ireland 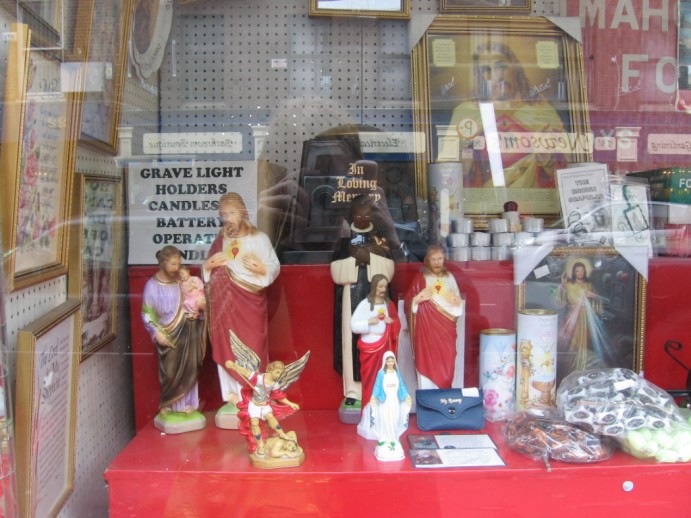 It’s quite difficult to compare religions across the various census returns as the list provided changes with each census. However these are a few of the principle figures that are of particular interest.

A quick look makes it clear that Roman Catholicism is still the predominant religion in Ireland, with Church of Ireland in second place. The rise in both Orthodox and Muslim numbers reflects the increase in migration to Ireland in recent years.

But while it appears that numbers in all religions are mostly going up, however this isn’t the full story as the population is also rising over this period.

Note that prior to 2016 options for Atheist, Agnostic were included , along with Lapsed Catholic. We have added Atheist to No Religion in the table above for those years, but not the other options, making this a conservative figure. There was no option for Muslim prior to 1991 or Orthodox prior to 2011.

Probably the biggest trend in religious affiliation is a move away from Catholicism and a rise in people stating they are of no religion, which is more obvious when shown as a percentage of population.

The Place of Religion in Irish Society

Many people believe that Ireland is, in some official way, a Catholic country. While Catholics are, by a mile, the largest religious grouping in Ireland, there is no reference at all in the Irish Constitution to Catholicism.

There are references to religion in the constitution, right from its opening line: “In the Name of the Most Holy Trinity, from whom is all authority and to whom, as our final end, all actions both of men and States must be referred”. Religious belief is acknowledged: “The State acknowledges that the homage of public worship is due to Almighty God.”

However there is no reference to the Catholic church, no religious body is given preference over any other and in fact the constitution goes on to state in clear terms a guarantee not to endow any religion or impose any penalties due to religious belief.

Freedom of conscience and the free profession and practice of religion are, subject to public order and morality, guaranteed to every citizen, and no law may be made either directly or indirectly to endow any religion, or prohibit or restrict the free exercise thereof or give any preference, or impose any disability on account of religious belief or religious status, or affect prejudicially the right of any child to attend a school receiving public money without attending the religious instruction at the school, or make any discrimination as respects State aid between schools under the management of different religious denominations

Constitutionally the result is that Ireland is one of the most religiously free countries in the world.

The Role of Religion in Modern Ireland

It is interesting to note that while 90% of people stated that they were Catholic in the 2006 census,  a Europoll conducted several months earlier found that just 72% of people believe there is a God. Which appears to suggest there are a good many Catholics in Ireland who don’t believe in God.

These apparently irreconcilable numbers however make a certain sense when looking at the place religion has in everyday life in Ireland to-day. Church attendance is dropping. A number of survey suggest that only between 30% and 35% of Irish Catholics now attend mass weekly, a huge reduction on the 90% plus who attended in the 1970s.

For an increasing number of Irish people church is a place they go to on special occasions – to baptise their children, get married or bury their dead – but rarely ever visit outside of those events.

Being Catholic, or Protestant, in Ireland is as much a cultural as a religious statement – it’s often a statement about a heritage rather than a  belief.  There was often a significant misunderstanding by outside observers looking at the long running conflict in Northern Ireland who frequently saw it as a “religious war”.  It never was, it was a struggle between communities with diverse histories and cultures. Thus the well known gag about the Belfast man who stated that he was Jewish, only to be asked “Yes, but are you a Catholic Jew or a Protestant Jew?”.

Leaving the situation in Northern Ireland aside, Ireland is in general a place where there is great tolerance and respect for diversity in religious belief – discrimination based on religion is not common, though sadly the same cannot be said with any confidence for ethnicity.

While the constitution does not place one religion over another, this would be hard to detect when looking at the state education system. There is a system of free state funded primary (elementary) schools, known as National Scools, but these are invariably Catholic schools in all but name. Although pupils of any religion may, and do, attend, the schools are governed by boards chaired by the local Catholic bishop and the teaching of Catholic Religion is central to the curriculum.

Those who wish to attend a school where another religion is taught, or an inter-denominational or non-denominational one, can do so in privately run schools, though these do receive state funding. However these schools do not exist in many areas, or are over-subscribed, and the reality is that over 90% of primary schools are Catholic run. There are some moves by the government to rectify this situation, but the wheels seem to be turning slowly.

It’s often suggested that this lack of choice in schools is one of the reasons that people who no longer practice their Catholic religion, or who have essentially left religion behind, still have their children baptised – it’s all about getting a place at the local school.

At secondary (high school) level, the vast majority of schools, while funded by the state, are run by religious and have a faith based ethos, although in a time of dwindling vocations and aging congregations many have latterly turned over day to day management to  lay trusts.

The once unquestioning  reverence for the clergy which was a feature of Irish life has been permanently undermined by a series of scandals which emerged over the last 20 years or so.

From now seemingly tame revelations about a well known bishop revealed to be a father, the scandals seem never ending and became ever more horrific – financial impropriety, extreme physical and mental punishment, sexual abuse of children, the virtual slave labour endured by “fallen women” in Magdelen laundries, the brutal treatment of unmarried mothers and their children, illegal adoptions… it goes on and on.

The strenuous efforts made in the wake of these revelations, by the church in general and by individual religious orders, to protect their financial position in the face of a slew of court cases did little to improve their standing. They have almost certainly been a major factor in the reduction in church attendance figures.