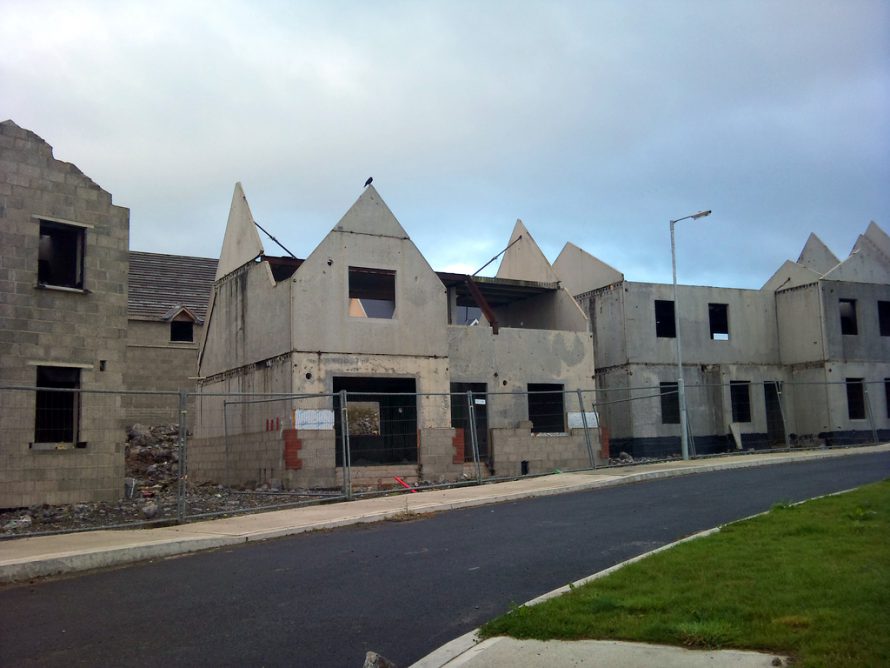 Much of the vaunted successes of the Celtic Tiger era in Ireland was based on construction, with massive numbers of house, apartment, hotel and commercial building projects creating employment not just for Irish workers but for large numbers of immigrant workers also. Property boomed, lots of people became very rich. Then suddenly it crashed and lots of people became very poor – though not necessarily the ones who’d benefited most from the boom.

If there was any one thing that sums up the madness that was the boom in Ireland, it was house prices. People started to believe they only went up and that you could become rich just by owning one. If the resultant rise in prices was dramatic, the fall was even more so. Many families struggled – and are still struggling – to pay loans on homes that were not worth near what they paid for them, or fell into arrears as jobs were lost and incomes fell.

And that’s without even mentioning the buy to let market, which went mad entirely. Banks were more than keen to lend, happy to leverage existing property to allow people to buy more, with little regard to what would happen if the market changed. And of course change it did.

An average house is a nebulous thing of course, it could be any thing from a box sized apartment to a palatial house on its own grounds, and there is huge variation from neighbourhood to neighbourhood, but these figures give a broad outline of how (badly) it went after 2007.

You’ll see it began to change again in 2013. House prices in Dublin rose – just a little – and those elsewhere fell more slowly. It looked like the start of a change, and it was.

Is this another boom?  This time the problem is a different one. Because of a slowing down (to a near stop) in construction when prices crashed, combined with a rise in population, there is an acute housing shortage driving the market now. This is seen not only in the rise of house prices. There is an increasing problem with homelessness and a situation where young people in particular are priced out of the housing market and resigning themselves to a lifetime of renting.

The graph below shows previous years before and after the boom as reference points to show price recovery. But it does not tell the whole story. In some more ‘desirable’ parts of Dublin prices have returned almost to peak boom levels.

I’ve included some historic figures in the chart below as a pre-boom baseline – the boom probably began around 1997/1998, so the earlier figures represent something like a ‘normal’ construction rate, gradually increasing broadly in line with population growth.

2007 was the peak of the construction boom, but it is important to note that a sizable majority of permissions granted then have never proceeded to building stage. Some never will, having managed to get planning even though located where nobody wants to live or in areas unsuitable for housing.

The skyline in Dublin is again replete with cranes, business is booming, employment is high. But where will all these people live?

There is nothing to suggest we will soon be able to provide enough housing for an already hungry and growing market, leading to a genuine shortage and resultant price rises.

There is no doubt that homelessness has become a real crisis in Ireland in in the last few years. Yet the figures below are only the tip of an iceberg  – there are many more people in precarious housing or living with parents who don’t make the statistics but are all experiencing problems establising a home.

As it is anywhere, homelessness is a complex issue but the extent and severity of the problem in Ireland now is primarialy down to a lack of places for people to live. In Dublin work is plentiful, all the big tech industry players are in town, the place is booming in some ways, but accommodation is scarce and rents unaffordable for many people – even those with good jobs.

Have you something to add about "Housing & Homelessness"?