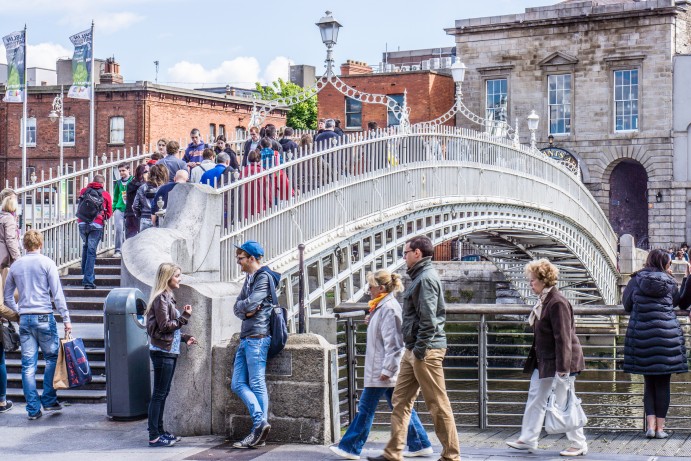 This page has, at a quick glance, a lot of major demographic information about Ireland.

Much new data became available recently from the census held in 2016 and where it is available that is used here. Other figures may be earlier, and if so this is stated.

This page is updated regularly with new up-to-date data as it becomes available – check the date at the bottom of the page for the time of last update.

The estimated population (taking account of immigration and emigration since the last census in 2016) is 4,921,500 as of April 2019. The figures below are from recent census results.

Looking at the two charts above, two things are obvious:

Much of this aging can be put down to the reduction in the number of young children – which primarily was a reduction in pre-school children aged (0-4) – and young adults (20-29) since 2011. These are not unconnected. Following the financial crash a very large number of young people emigrated or travelled abroad for work, at an age where a good number would have been starting their families. It is also likely that due to fairly precipitious falls in household incomes around the same time that some who stayed delayed starting a family.

However the days of the huge Irish family with 10 or more children is well and truly over – for which many women are truely thankful! The birth rate per 1000 of population has been decreasing steadily for many years.

Note the precipitous drop between 1980 and 1990 – the ’80s was the decade when contraception finally became available in Ireland. I am not sure what caused the bounce in 2010, but perhaps it was the effect of the recession – people staying home more with little to do except… make babies! The continued drop afterwards may again be due to a combination of increased emigration, reduced income and the effect of lack of affordable housing.

Once  – and still to a large degree – a nation of emigrants, Ireland has become home to an increasing number of immigrants over the last couple of decades.In the 2016 census, 810,406 people or 17.3% of those normally resident in Ireland were born in another country. These people come from a huge range of countries, but the countries below are those most represented.

3. The move from country to city

Many people still have the view that Ireland is largely a rural agrarian country, with most people living in the the countryside or in small villages. This has not been the case for many years and the population is increasingly urbanised, with 63% now living in cities or towns, more than 1.2million of them in Dublin, which is by a very long way the largest and most populous centre.

What this growth in the urban population has meant for rural areas is best seen when looking at a somewhat longer time frame. Look at the difference between 1961 and 2016.

Over 3 million people have completed their full-time education, with just over 600,000 still in full time education. The chart below shows the levels at which education was completed. Approximate US equivalents are in brackets.

Only about 30% of people say they can speak Irish and for most of those it isn’t their primary language and is one they use only occasionally or mainly in their home.

Of those who speak it daily many do so in connection with education – it is surprising given the low number who say they can speak Irish that it’s a compulsory subject in school and is taught to almost all students from when they enter school aged about 5 until they leave at about 18.

However the language is far from dead.

In recent years there has been more championing of use of the language, with increased popularity of adult lessons and events popping up all around the country where those with even a little Irish have the chance to use the language in a social setting. Gaelscoileanna – schools were all teaching is through the medium of Irish – are increasingly popular.

If you lived in Moneygall would it mean you'd be rich? Sadly no.