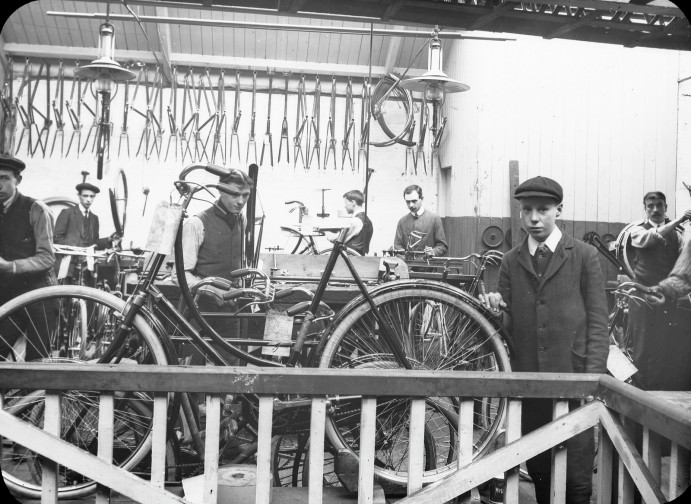 Many well-known Irish boys names are translations from English and although names like Michael, Patrick, Brendan and Thomas were, and are, very common, they are not actually Irish names at all – but English ones which as a result of common usage became associated with Ireland.

Older names of Gaelic origin which have retained their popularity over the generations include Oisin, Cian, Eoin, Cathal and Fionn.

The names below are all of older, occasionally unknown, origin, some popular down the years, others regaining popularity after many years in the wilderness.

Story of a Name: Brendan 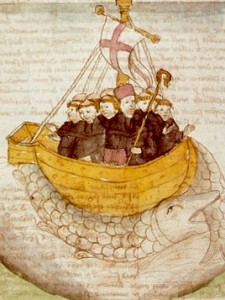 St Brendan the Navigator is an Irish saint, who lived from 484 to 577. As a young priest he set out on a seven year long “voyage for Paradise”, in search of the Garden of Eden.

He didn’t find it, but on the journey encountered both the horrors of the world – Judas frozen on one side and burning on the other, people with swine heads, the enormous fish that holds his boat in the picture – and the world’s greatest wonders, landing for a time in Tir na nOg.

He was venerated on his return for having survived such travails and is to-day the patron saint of sailors.

Although this story has many paralells with earlier legends, Brendan certainly lived and there are those who believe he may have reached America on his journey, many centuries before Christopher Columbus.

Irish explorer Tim Severin proved that this was not unfeasible when he built a curragh, an ox-skin clad boat such was was used in Brendan’s time, and during 1976 and 1977 sailed in it from Ireland to Newfoundland.

Means ‘monk’. There was a 6th century saint of that name.

A ‘sprite’ or other-worldly being. Ailill Molt was an early Irish king.

A 6th century Irish saint who was a disciple of St Patrick and is said to have been raised by wolves.

A Norse name which became an Irish one, from ‘Olaf’. McAuliffe is a reasonably common surname.

Means ‘great champion’. It was a common name in the O’Brien clan but little used otherwise.

Aodh means ‘fiery”. Red Hugh O’Donnell was the leader of many battles with the forces of Queen Elizabeth the first at the end of the 1500’s before being defeated by her army at the Battle of Kinsale in 1601.

Aodhan means ‘little Aodh’ or ‘little Hugh’. St. Aidan of Iona who founded a monastery at Lindisfarne in England.

From ‘aon’ meaning ‘one’ and ‘gus’ meaning ‘strength’ or ‘vigour’. In Celtic mythology Aengus of the Birds is the god of love or of youth and vitality.

Often mistakenly thought related to Arthur, which it isn’t, though it is nowadays used as the Irish for Arthur. Once a common name, the most famous bearer of it was Art McMurrough a king of Leinster.

Means ‘the white one’.

Means ‘sharp’ or ‘spearlike’. St Barry was a disciple of St Kevin at Glendalough.

Means ‘salmon’ which in a round about way means wisdom, as a result of the Irish legend of the “Salmon of Knowledge”, see here.

Often used in place of Brendan, but is in fact a different name. May derive from ‘bran’ meaning raven. Mount Brandan in Co Kerry is named after St Brendan though. Confusing.

Means ‘prince’. A name which has been in consistent use in Ireland since the 6th century at least. It is widely believed that Irish St Brendan the Navigator reached America before Columbus.

‘Brí’ means hill and in the context of a name it means ‘high (as in noble) and strong’. Brian Boru was the first high King of Ireland and the man who defeated the Vikings at the Battle of Clontarf.

‘Strong man’. It occurs frequently in Irish mythology, most notably as Cairbre Nia Fer, who was a King of Tara killed by Cuchulainn. His brother later had a hand in killing Cuchulainn.

Canice is itself an Anglicisation of ‘coinneach’ meaning ‘attractive one’. St. Canice, a 6th century saint, founded the church in Kilkenny which gave the city its name – Kilkenny in Irish means “Canice’s Church”.

St. Kevin’s monastery at Glendalough in County Wicklow, with its round tower, is one of Ireland’s most famous monastic sites.

Means ‘great warrior’. It was a common name in medieval Ireland.

Means ‘victorious warrior’. Cearbhall O’Dalaigh was president of Ireland from1974-1976.

The name means ‘long lived’ or ‘ancient one’.

Ciar means ‘dark’ and the ” at the end indicates ‘small’ so the name means ‘little dark one’. There are several saints of this name in Irish history.

‘Of the church’. Si Killian was a 7th century Irish Christian missionary in Europe who was killed by a Duke after he berated him for marrying his brother’s widow. He is the patron saint for sufferers of rheumatism. The name is likely to become more popular now thanks to Irish movie star Cillian Murphy.

Means ‘little hound’. Was a common name in early Ireland. In Irish legend Cónán Maol (or Conan the Bald) and Conan Mac Lia were both warriors of the Fianna.

Means ‘lover of hounds’. Conor MacNessa was one of the most famed Kings of Ulster.

In Irish legend Conn of the Hundred Battles was a high King of Ireland and a forebear of the O’Neill clan. The name is still quite widely used in Ireland.

May mean ‘raven’ or ‘son of the charioteer’. Sometimes translated as ‘impure son’ but this is not believed to be correct.

Irish version of the English name. Particularly common in Galway.

‘Little brown one’. St Cronan was a 7th century abbot who founded an Abbey and a school at Roscrea, which is still in existence to-day.

Brown bread is an Irish staple, often made daily in the home as it is quick and …