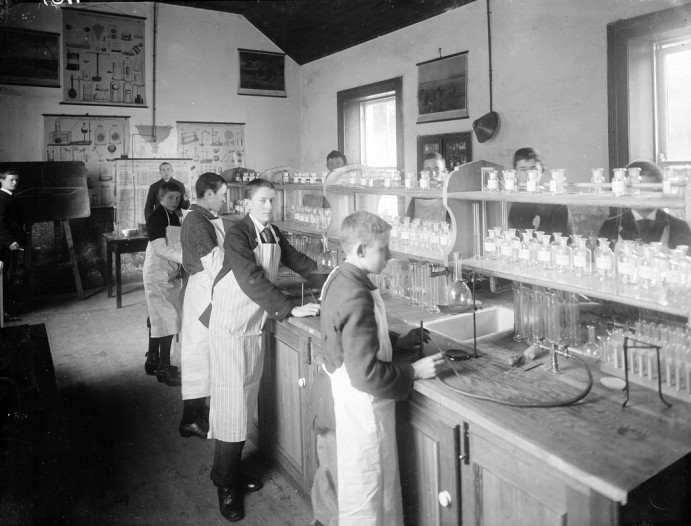 The Story of a Name: Lugh 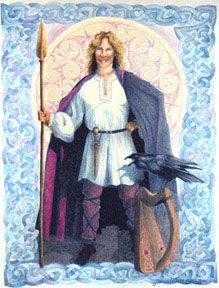 Lugh Lamhfada (or Lugh of the Long Arm) was a a member of the Tuatha Dé Danann, a mythical Celtic race of great warriors renowned for their skills in poetry and magic.

Before Lugh was born, his Grandfather, the hated Balor of the Evil Eye, was told in a prophesy that his daughter’s son would kill him, so when she gave birth to triplet sons he tried to have them killed. Somehow Lugh survived and was taken away to be reared in hiding.

He grew to be a benevolent godlike figure, skilled in magic, healing and music and was entrusted wih the invincible spear of Gorias. He eventually returned to Ireland, fulfilling the prophesy by gouging out the eye of Balor and killing him, ushering in an era of peace.

The feast of Lughnasadh, named for Lugh, is an Autum harvert or fertility festival which is still celebrated with bonfires and dancing in some parts of Ireland today and was made famous in the movie Dancing at Lughnasa, staring Meryl Streep.

Means ‘place of the lakes’. and is a Viking rather than an Irish word. After the Vikings were defeated, most of them left Ireland but a considerable number remained and intermarried. This was a name commonly given to their descendants.

Lugh of the Long Arm was a mythical hero of the Tuatha da Danann, who killed Balor of the Evil Eye. Great names in that legend!

The name means ‘little monk’ and St Munchin, about whom little is known, gave his name to a famous Limerick School. The anglicised form is the more popular name, but even it is uncommon.

This is not an Irish name at all, though it is commonly used here, but a Hebrew one meaning “messenger of God”. It’s use in Ireland honours St. Malachi who was the Bishop of Armagh in the 12th century.

Cane with the Vikings, from Magnus. Popular name in Donegal especially, which seems odd as I don’t think the Vikings ever got there.

Maol is thehortened version of Maoliosa meaning ‘follower of Jesus’. There is a well known Irish saint of this name.

Founder of the church bearing his name in Dublin, St Michan was a monk about whom nothing much else is known.

Old name from Celtic mythology. Was originally a boys name but now used for both boys and girls. In legend Naoise eloped with Deirdre, who was to marry the King of Ulster and was later killed by the King. Deirdre died of grief.

Means ‘little saint’. Was quite a rare name but a very well known Irish chef, Nevan Maguire, has brought it to public attention again. I would bet on its revival.

Means ‘passionate’. One of the High Kings of Tara bore this name.

Means ‘dark haired.’. There are several Irish saints with this name and thus churches called after them in various places.

Means ‘fawn’ or ‘young deer’.Name of an Irish hero and poet, son of Fionn mac Cumhail (Finn McCool) and the goddess Sive. One of the most popular traditional names in Ireland.

Obviously the use of the name is in honour of St Patrick, parton saint of Ireland and reputedly the man who brought Christianity to Ireland. The name itself is Latin in origin and means ‘of noble birth’.

Irish form of Peter, which is a Greek name meaning ‘rock’.

A variant of the French name Piers, which was both a surname and a first name that came to Ireland with the Normans. It is still a common surname and widely used as a forename, though its latter day popularity owes more to Patrick Pearse, a leader of the Irish Rising, than its Norman origin.

The Irish name means ‘small french man’. It entered the Irish pantheon of names after the Franciscans, followers of Francis of Assisi came to Ireland.

Means ‘little king’. The English version is not common in Ireland as a first name but is one of the most common Irish surnames.

Old Irish meaning “little seal”; There was a 6th century saint of that name. Ronan was also a legendary King who was tricked by his second wife into killing his own son. It is a fairly common surname as well as first name.

From ‘ros’ meaning a promontory, presumably in the case of a person it can be interpreted as meaning ‘prominent’.

Means ‘little red one’. Most bearers of the name have red hair.

A diminutive of Seán, but quite popular in its own right.

Means ‘helper’; Irish form of Terence. Often given in honour of the 17th century poet and harpist Turlough O’Carolan.

Means ‘Ulsterman’; Ulster is the most northerly of the four provinces of Ireland. Several Irish saints have borne this name.