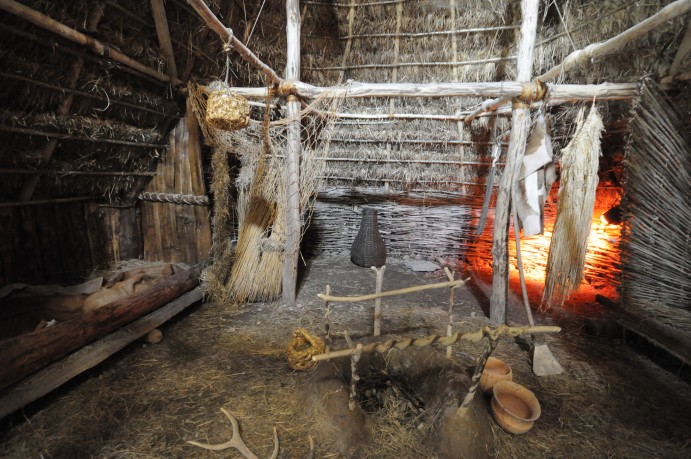 Ongoing excavations at Ceide Fields in Co Mayo provide a fascinating glimpse into farming and food production some 5000 years ago.

It was quite sophisticated, with farmers growing crops of oats and barley, ploughing fields using ox drawn ploughs and building enclosures to keep livestock.

The methods of farming used at Ceide fields, the foods produced and they way they were cooked were remarkably similar to those which prevailed in Ireland for thousands of years afterwards.

The image on the top of the page is a reconstructed interior of an early Christian house – so a typical home of the 5th century – with a cooking fire in the centre of the picture. For centuries people cooked their food over a fire in a similar fashion, either indoors or outside. In some rural places cooking was still done this way up to the early years of the 20th century.

Food was also sometimes boiled in a wooden cooking trough using water boiled and then kept hot by stones heated in a fire.

Makeshift ovens were created by inverting the pot or by placing food on hot stones and then building a roof of stones over it.

Food was served in wooden bowls or in wicker baskets, even drinking vessels would originally have been made of wood though later metal serving vessels were common.

By the medieval period some of the very wealthy and powerful had dedicated kitchens or ovens fueled by turf, with servants to prepare the food if they were really wealthy.

The fire was fueled by turf or logs and provided heat as well as a place to cook and was in what was often the only room in the house, a space which was often shared with livestock. This too was a custom that persisted – a cupboard which incorporated a pen to hold a couple of laying hens was a popular item of furniture up to the mid-20th century.

For thousands of years the staple diet was grain based, mainly oats and barley, generally eaten in the form of porridge but also ground into flour to use for bread. It was the most important part of the diet of both rich and poor.

Meat was important at some periods of history but not always. There are periods when farming seems to concentrate on crop production and during these times animals such as cattle and sheep would mainly have been kept for milk production and the making of cheese or curds, a common food.

At other times, little farming of crops took place and people ate a lot of meat, both from animals kept for the purpose and wild animals. Birds, wild boar and goats, deer and even hedgehogs were commonly eaten. Meat was always more commonly eaten by the better off rather than the poor.

By the start of the 16th century there were areas of the country mainly devoted to producing grain crops and others where the production of meat was more important, depending on the type of land. Farmers sold their produce and livestock at local markets, directly to householders or to agents who took it to the larger towns.

Tenant farms – worked by farmers who paid rent to a landlord – were often required to sell exclusively to their landlord at fixed prices, frequently well below the market rate.

Until the mid 1600’s dairy produce and eggs were not widely either bought or sold at market, instead just about every household kept a cow and some hens to provide their own. In some parts of the country, especially close to the sea, the eggs of wild birds were eaten.

Fish was important, from both the sea and the many inland rivers and lakes. Shellfish was widely eaten but was considered inferior and was a food of the poor, especially mussels, periwinkles, limpets, crabs and razor clams which could be gathered without the need for boats. The same was true of edible seaweed, which was commonly mixed with milk and honey to make a sweet dish still popular with some people today.

Vegetables were not cultivated at all in Ireland until around the 8th century, before that wild leaves, roots, berries and fungi were eaten. When they did arrive, the main vegetables grown were carrots, parsnips, celery, turnip, cabbage and onion.

Throughout history people ate wild fruit and nuts, especially hazelnuts, but until the mid 1500’s apples were the only cultivated fruit.

English colonists who arrived in the middle of the 17th century developed extensive vegetable gardens and orchards around their houses and brought with them pears, strawberries, plums and cherries. They even grew exotic fruits such as peaches, nectarines and figs, presumably under cover. The poor Irish of course had none of these delicacies, other than those which they stole from time to time.

Bread was commonly eaten by the 16th century, and even cake, though this would not have been everyday fare. The wealthy kept a store of exotic spices and various types of sugar, while the poor seasoned their food mainly with salt and honey, using the latter even on fish, which sounds particularly revolting.

In early times there would have been little difference in the diet of rich and poor, aside from quantity, since what was grown could only be used locally and what was foraged or hunted for was available to all. After the Normans arrived in the 12th century, things changed.

As land was increasingly taken over by Norman and then English landlords and settlers the native Irish were reduced to the status of tenants or relegated to small farms on poor land. The Normans forbade the Irish from hunting game, deer in particular. A hierarchy emerged with English landowners at the top, their agents, merchants in the growing towns and the remaining larger Irish landowners in the middle and servants and poor farmers or farm labourers at the bottom.

How people ate depended largely on their position. The poor largely subsisted on a diet of vegetables and grain, while the wealthy ate a diet rich in meat, game and fish. Feasting on special occasions was indulged in by all but mainly by the rich.

Food was not always plentiful, especially in the harsh wet winters which were not conducive to easy storage. By the 16th and 17th centuries the country was in a state of conflict between the native Irish and the Norman and English rulers, which made producing a consistent food supply difficult.

In addition a lively export trade had developed, not just in grain but also in salt meat and butter, and the pressure to pay rent meant that most of the rural Irish were forced to sell almost all they could produce.

Survival was becoming a real struggle for those at the bottom of the pile. All that was about to change with the coming of the potato.