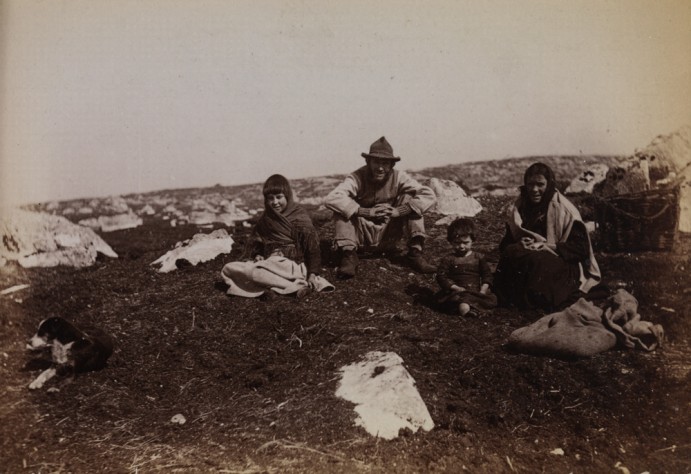 The potato has been around for a long time, and is one of the earliest ever cultivated foods, but only arrived in Europe in 1570, from South America. The Irish took to it quickly. It grew well in Irish conditions, provided bountiful harvests and, most importantly, could be easily stored and eaten during the winter months.

Its effect was nothing short of dramatic, but what seemed initially like the answer to a prayer would turn out to be a curse.

With access to this new staple food the Irish population began to grow, and grow extremely rapidly. When the potato arrived in 1580 there were fewer than 1 million people living in Ireland, by 1840 the population had exploded to more than 8 million, most of them poor.

The burgeoning population lived on a diet comprised mainly of potatoes and milk, which if eaten in sufficient quantity is a surprisingly nutritious, if monotonous, diet. It is also relatively tasty and easy to prepare.

It is estimated that by the late 1700s an average family of two adults and four children needed 5 tons of potatoes a year, or about 5lbs of potatoes each a day. Though this may seem a lot, even a poor farmer or farm labourer could readily grow this amount on just half an acre.

The Irish Diet before the Famine

By the early 19th century everyone ate potatoes, from rich to poor, and no meal was complete without them. For some this was almost all they ever ate.

What the Poor Ate

A report on the food given provided for inhabitants of workhouses in 1840 would have been an extreme, but not untypical, example of the diet of the poor.

Milk was not always available and herring was a popular and cheap substitute, with oatmeal replacing or supplementing potatoes when they were scarce. They also ate what they could forage in the wild – berries, nuts, nettles, wild mushrooms and now and then a rabbit or bird. However these were all occasional rather than regularly eaten foodstuffs.

Outside of cities, little or no food was purchased in shops. Rural people either produced their own food or obtained it by foraging or hunting.

While the potato provided enough food to allow the poor to survive and grow in number, it also caused their diet to become very narrow and restricted, a massive change from the varied diet eaten in earlier times and, as would become clear, a very dangerous dependence.

What the Rich Ate

The better off had access to cultivated vegetables and regularly ate meat, primarily pork and mutton with rather less beef. However these foods were expensive and even in the homes of the well off tended to be ‘padded out’ with potato.

Many dishes looked on as being typically Irish – champ (potatoes and scallions, or spring onions), colcannon (potatoes and cabbage), Irish Stew (the poorer cuts of meat with potato and vegetables), boxty (fried potato cakes) – were developed at this time in an effort to eke out the food available and also, presumably, to provide some variety.

Another traditional Irish food, black pudding, which is made from ox blood and oatmeal, gave those who had a cow access to protein without killing their valuable animal – the blood came from occasional bleeding of live animals.

In towns, shops began to emerge from the early 1600s, primarily butchers and bakers, where before only open markets would have taken place. They had a ready clientèle in the merchants who controlled the export trade, the administrators representing the English government, army garrisons and the agents of landlords. As well as locally produced food they sold imported delicacies, preserves, spices, sugar and tea.

Irish Farming Before the Famine

The vast majority of Ireland’s rapidly increasing population was engaged in agriculture – more than 75% of men and, at least seasonally, large numbers of women also.

Oats and barley were grown as cash crop rather than for consumption, cattle were reared and dairy herds developed, almost all of which went to satisfy the demand for food products in Ireland’s larger towns and cities and in the populous urban centres of England.

Some of the native Irish were tenant farmers but most were cottiers or labourers, working not for money but in return for the right to a small plot of land, known as ‘conacre’, on which they could grow enough potatoes to feed their family.

A writer of the time, describes vividly the conditions in which they lived:

The master never fed a labourer…it was on the contrary a chief object with him to keep such a person as far away from his dwelling as possible. He therefore allowed him to occupy, at some remote corner of his farm, a miserable hut, a mere shell, formed of mud or sods, without loft, apartment or partition and sometimes without any other covering than that of straw or any chimney than the door. In one corner of this hovel was lodged his cow, while in the opposite were his wife, his children and himself.

The better off Irish who had land in excess of that needed to feed their families, such as the tenant farmers, sold almost everything they could produce to meet the demand for rent and to provide a modest income. As the population grew in cities like Dublin and larger towns, where there was the beginnings of industrial development, the market demand for grain, meat and dairy produce grew too.

Increasingly milk, for so long a vital part of the diet of the poor, was too valuable to drink whole and was either used to make butter or to fatten animals for sale. Poor families were left with the less nutritious whey. With milk less available, the state of nutrition of the poor population became ever more perilous and localised failures of the potato crop, which occurred sporadically from about 1800 on, saw many forced to leave their land and to forage or beg for survival.

It was, in every sense, a disaster waiting to happen. And then it happened.

Probably the most popular field game in Ireland, Gaelic football is an amateur …