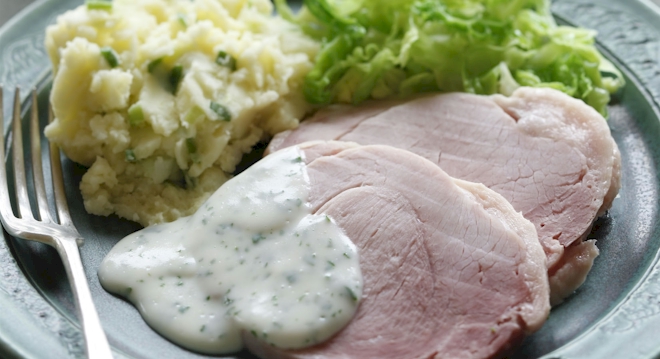 Shouldn’t that be Corned Beef and Cabbage?

Well, no, it shouldn’t. Bacon and cabbage is a commonly eaten dish in Ireland and while corned beef is eaten with cabbage it is a (relatively) recent arrival from, wait for it, America! How can this be?

To find out, we need to look for a moment into the history of food in Ireland.

In the past beef was a food eaten only by the wealthy. The ordinary Irish people, when they had access to meat at all, would have eaten pork. Because there was no way of storing fresh meat, they made the pork into bacon. This was done at  home by simply brining it, or preserving it with salt.

When the era of mass emigration arrived, during and after the famine in the 19th century, Irish emigrants to America found that beef was quite affordable.  Still, they treated it in just as they had always treated the meat – pork – they were familiar with at home.

Until about the middle of the 20th century, people living in Ireland would never have eaten or been able to obtain corned beef. But returning emigrants and greater ease of trans-Atlantic travel meant that the dish found its way to Ireland.

Nowadays corned beef is widely available in Ireland, but bacon and cabbage is still far more popular. It is a regular meal in Irish homes and often seen on menus, especially at lunchtime in pubs. Many restaurants and pubs serve corned beef also – but mostly those which expect to see a good number of American tourists, since it is a dish visitors expect to find.

From the point of view of this recipe it really doesn’t matter whether you use corned beef or bacon – one is an Irish American dish, the other an Irish one, but in either case there will be plenty of tradition on the plate!

If you are using Corned beef, you need a brisket. The bacon choice is trickier. American bacon is not commonly available in the cut used to make bacon and cabbage here, the loin, which is very lean. You can order this online in the USA from Irish Grub. If you cannot get this go with the corned beef. American bacon just will not work.

You need a good green cabbage for this, not any of the hard white varieties. Savoy cabbage is perfect, Kale works just as well.

Traditionally the Irish did awful things to cabbage, I have no idea why. They boiled it until it was slop and made matters worse by adding bicarbonate of soda to the water. This produces a truly awful glutinous mess, with a horrible smell that lingers for days. Don’t even think of trying it! Another, not much better, method is to add it to the pot with the bacon and boil it for about an hour. Disgusting.

There are options. A tasty way to serve the cabbage is as Colcannon and I sometimes use fried cabbage, which may sound awful but is very nice indeed. A good and fairly traditional method is described below however.

Place the meat in a large saucepan of water and bring to the boil. From here things vary according to the meat you use.

In either case once the meat is cooked, remove it from the water, dry it lightly with some kitchen towels. If there is a thick fat cover on the bacon I generally cut it off at this point – though that is sacrilage to some people! Retain a cupful of the cooking water – discard the vegetables, they were there for flavour and have done their job.

Mix together the honey, mustard and ground cloves and smear it all over the bacon. Leave it, covered, to ‘rest’ and let the honey mixture soak in for about 20-30 minutes – or several hours or even overnight if that suits you better.

Before serving, put the bacon into a moderately hot oven, about 400ºF (200ºC/Gas Mark 6) for about 20-30 minutes. This gives you plenty of time to prepare the cabbage.

Remove the outer leaves of the cabbage, cut it into four and remove the stalk. Then finely shred it.

Put half a cupful of the bacon water in a saucepan, add the butter and bring to the boil. Then add the cabbage and stir it constantly until it wilts and becomes slightly soft. It will take about 5 minutes to cook. The water and butter will disappear – partly coating the cabbage, partly steaming away – so you will not need to drain it at all.

Serve with mashed potato or Champ. Parsley sauce or mustard sauce goes well with this.