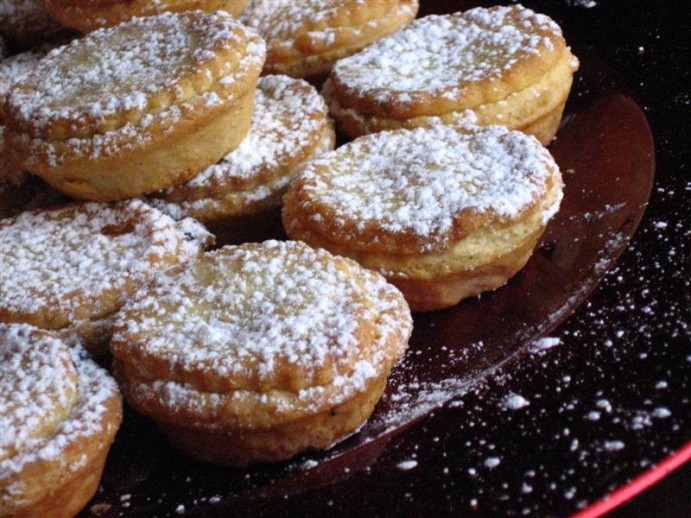 These are not perhaps as traditional in Ireland as they are in England, from where they originally came, but are widely made and enjoyed just the same.

The most important thing to understand is that although the pies are filled with what is known as ‘mincemeat’ there is NO actual meat in it. It is a rich mixture of fruit, nuts, spices and fat.

In England, where there is no doubt the recipe originated, suet is the only fat used, and often in a higher quantity than is used in this recipe. That may make it more authentic, but personally I think too much suet makes the mincemeat stodgy and heavy.

My mother always substituted half butter and in talking to other people in Ireland it seems that is is quite commonly done. So I am sticking with the version more likely to be made at home in Ireland.

Of course you could shorten this considerably by buying mincemeat and frozen pastry and just assembling the lot at home. But it is so easy to make the mincemeat part at home from scratch and it’s much nicer than most of the commercially produced ones.

But, I am not giving a recipe for the pastry – just use your favourite short crust pastry recipe or use frozen pastry.

This recipes uses weight rather than American cups for the ingredients. The best conversions list I have found is this one.

If you cannot get candied peel just leave it out.

Use all butter if you can’t get suet – or if you prefer the taste.

Mixed spice is made from approx equal amounts of ground allspice, ginger, cinnamon, cloves and nutmeg.

You will also need more brandy for later.

*American butter is lower in fat and higher in water content than Irish butter. Kerrygold Irish butter is available in some places in the USA, if you can find it use that. Otherwise Plugra is a good alternative.

Tp prepare the butter for this recipe, put it into the freezer for about half an hour before you start, then remove and finely grate it.

This is the easiest thing to make! Just mix all the ingredients well in a bowl. Cover the bowl loosely with a cloth and leave it somewhere cool for 4 days. Every day, twice or three times a day, give it a good stir, and if it seems to be getting dry add a couple of tablespoons of brandy.

After the 4 days, pot it into sterilized glass jars, top with a circle of silicone paper and seal the jar well, just as you would for jam. It lasts for ages, up to a year anyway. You may need to add more brandy from time to time to keep it moist.

Foil cake cases (like these) or a pie tray. A muffin pan will also work.

Roll out about 2/3 of the pastry to about 1/8 inch thick. Keep the left over trimmings.

Cut the pastry into rounds large enough to line your cake cases. Spoon about a dessertspoon of mincemeat into each pastry case – don’t overfill.

Use the pastry trimmings to cut small decorations – Christmas tree or holly leaf shapes maybe. Place one on top of each pie. Brush the entire surface of each pie with the egg/milk glaze.

Place in the oven for 30 minutes, until the pies are golden brown on top. Remove and shake a little fine sugar over them while they are still warm.

Serve now, or store and reheat in the microwave when needed. Mince pies freeze very well so can be stored for quite a long time.

They are usually served hot with cold whipped cream. Yum!!