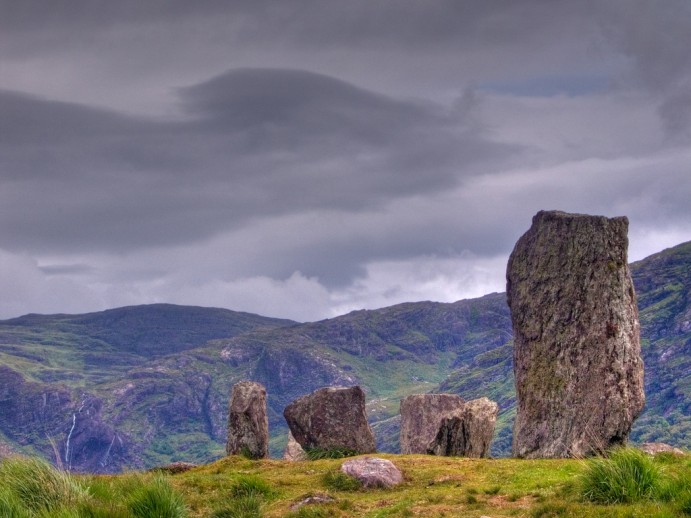 The first people arrived in Ireland during the Stone age, about 8000-10000 years ago, probably from the area of present day Scotland. This was late, most of Europe had been peopled long before, but perhaps not surprising given Ireland’s remote location at the edge of the continent.

The first Irish people were hunter gatherers, constantly on the move in search of food. Findings of stone and flint tools tell us that the population spread gradually from the North, first downwards along the Eastern seaboard, and then inland along river courses to the area of the Shannon River.

Simple pottery from this time has been found and evidence that the people lived in ‘portable’ dwellings constructed from sticks and covered with animal skins. They also made boats, not surprising since they arrived by sea and moved along rivers.

Between 2000 and 5000 years ago, in the late stone age, Ireland had a thriving and growing population. Hunting for food was being replaced by farming, a practice brought to Ireland as new waves of people came and settled. 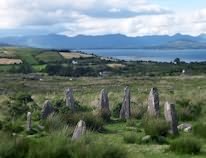 Excavations at Ceide Fields in Co Mayo are revealing fascinating details about the patterns of life of these people. Being able to eat without having to hunt meant that permanent dwellings became possible and communities began to grow up.

People started to move further from river courses, clearing forests in order to create more farming land, which suggests there was a large population in Ireland by this time.

The legacy left by these people is a truly remarkable one, more than 1500 remains of tombs, standing stones, dolmens, stone circles and passage graves, comprising some of the most important Megalithic sites in the World.

The Passage Tomb at Newgrange

The Megalithic Passage Tomb at Newgrange is an enormous and truly awe inspiring structure over 5000 years old, predating the Pyramids by more than 1000 years.

Archaeologists estimate that it took at least 20 years to build, with hundreds of labourers involved in its construction.

From the outside the mound appears as a kidney shaped mound of grass-covered earth, extending over an acre of land. It is surrounded by a wall and outside that a number of carved kerbstones. Over the entrance is a roof box, or small window-like opening, which allows light into a narrow passage about 70 ft long which leads to a cross shaped inner chamber.

In the days around the Winter Solstice, from December 17th to 23rd, the precise alignment of the roof box causes light from the rising sun to shine directly down the long passage and illuminate the normally pitch dark inner chamber.

The event lasts about 17 minutes and is not repeated at any other time of year.

By about 2500BC, metalworking had arrived in Ireland and copper and bronze implements, jewellery, shields, weapons and even musical instruments were created. Early metal pieces were basic, created using hollowed stone moulds; later ones were made using carefully constructed three dimensional clay moulds and were far from crude, displaying a skill and artistry that would be hard to match today.

Gold began to be used towards the end of this period and the creation of elaborate Gold vessels and jewellery continued for many centuries.

Where to visit in Ireland

Anyone with even a passing interest in Stone Age farming in Ireland will be enthralled by Ceide Fields in Co Mayo.

The passage tombs of Newgrange, Knowth and Dowth are a must. Less visited but just as worthwhile are a series of stone circles and other megalithic stone remains at Lough Crew.

There is a permanent exhibition of pottery, jewellery and other remains, including a boat dating from 4500BC and early musical instruments, from the Neolithic period at the National Museum in Dublin.

There are standing stones, stone circles and dolmans pretty much all over Ireland, but two notables are the Poulnabrone Dolman in the Burren, Co Clare and Browne’s Dolman in Co Carlow.

An alphabetical list of Irish surnames beginning with P and R, from Plunkett to …