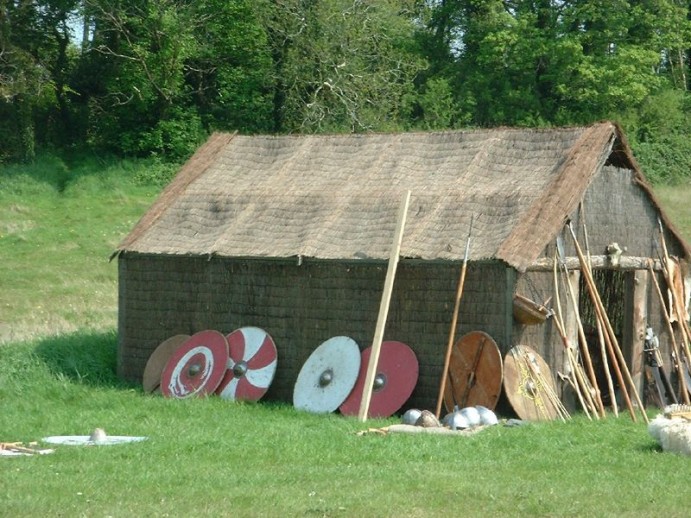 They came from the North and they came in numbers, these fearsome Norsemen with their huge fleets of ships and their warlike ways. From about 795 AD, when they made their first recorded landing on Rathlin Island, they began to land on the eastern shores and by following river courses to penetrate into the country, establishing themselves stategically in locations suitable for trading.

They found a country with no overall ruler and fragmented kingdoms constantly in dispute. The Vikings fought for and seized land and territory, initially by force later by a mixture of military means and by establishing alliances with local cheiftains.

They also were quick to grasp the opportunities that existed for acting as traders between kingdoms and for exporting and importing goods, a practice not previously widespread in Ireland. 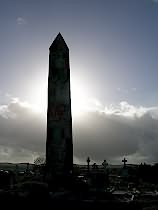 For the most part during their time in in Ireland the Vikings remained pagan, with little or no regard for the sanctity of Christian objects or buildings.

The monastic settlements, which were by now integrated into virtually every part of Ireland and had built up a store of valuable and precious religious objects, were an obvious target for raiders and the Vikings ransacked and destroyed many of them. They had no compunction about killing anyone who got in their way.

During this time round towers, a notable feature of the landscape in Ireland, increased greatly in number and are variously thought to have acted as look out towers watching for Viking raiding parties, safe places to hide valuables and as places of shelter for people.

For many years it was believed that the Vikings were unapologetic plunderers, who gave little or nothing to Ireland and took much. This view is not entirely supported by historians and the true picture is more complex.

Certainly their initial arrival was at times bloody and fierce, but within a short time they had started to forge alliances with the Irish, to settle, form communities and establish trading centres.

Intermarriage with the Irish soon followed, often a strategic measure which gave those related to important Irish families a distinct trading advantage.

There is even evidence that some began to adopt Christian habits, even if not deserting Paganism. For example Viking graveyards have been found, although the use of funeral pyres rather than burial would have been their custom.

As seafarers and noted merchants and traders the Vikings had much to teach the Irish. It was in this period that coinage was first introduced to Ireland – the Irish word for penny, ‘pingin’, is a Viking word – and that a distinct class of merchant traders emerged.

They were less interested in land than past and subsequent occupiers of Ireland, and did not attempt to amass large territories. 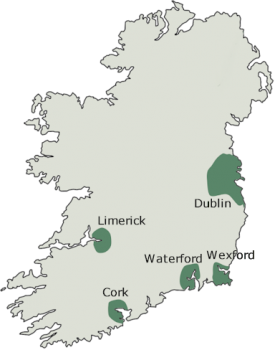 Instead they stuck primarily to the coast, taking control of  land adjacent to natural harbours where they set up trading centres.

Several of Ireland major towns and cities originated as Viking trading settlements, some retaining to this day the Viking influence in their names, such as Waterford (Vadrefjord) and Wexford (Weisfjord).

Dublin in particular owes much of its subsequent development to its Viking founders. Sitric, a Viking ruler in Dublin, built the cities famous Christ Church Cathedral and the basic layout of the centre of the city was established at this time.

From these settlements they sallied forth to both trade and raid.

It was long believed that these coastal settlements represented the full extent of Viking settlement in Ireland. However recent discoveries of Viking remains have challenged this theory and it is possible they settled more widely than previously believed.

During archaeological investigations in 2002, prior to the building of a bypass around Waterford city, a most exciting and important discovery was made close to the small village of Woodstown.

As the excavations progressed numerous objects, including silver ingots and Viking coins and weapons were turned up. The metal objects found have been dated to the mid 9th century. Extensive evidence of human settlement was found, a surrounding ditch, house gullies, postholes and hearths.

It was quickly apparent that these were not just scattered detritus of a raiding party, but the remains of a densely populated Viking settlement and an affluent one at that. Carbon material from the site enabled archaeologists to date parts of the settlement to as far back as 600AD, long before the Vikings arrived.

For a time it seemed that in spite of the findings the road would go ahead, but thankfully the authorities relented and diverted its course away from Woodstown.

Woodstown is unique – there is no evidence of such a large 9th century Viking settlement anywhere else in Western Europe – and as such is a vital piece in the jigsaw of European History.

If you would like to know more about Woodstown, there is a wealth of regularly updated information at the Viking Waterford website.

The Battle of Clontarf

The Vikings remained a dominant force for more than a century, but many Irish Chieftains never accepted their presence quietly. Although divided by old enmities, the Irish were forced to unite, to some degree at least, against a common foe. Eventually an overall ruler emerged around 1002AD, in the person of Brian Boru, who now became, de facto, the first High King of Ireland. 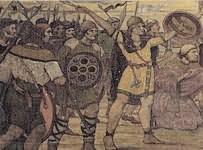 By 1014, Brian Boru had assembled a large army and headed to the Viking stronghold at Dublin. The Vikings were expecting them and, with support from allies in Scotland, headed to sea in their longboats, preparing to launch a surprise attack on the Irish before they reached Dublin.

They came ashore at Clontarf, to the north of the city, where a fierce battle commenced in the early hours of Friday April 23rd 1014AD.

At first the Viking tactic of attacking from sea seemed to work, as it had so many times in the past, and their heavier weaponry and more organised forces gave them a distinct advantage.

But the Irish had numbers on their side and as the battle went on more and more of them arrived. 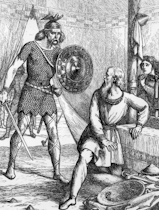 It was a bloody and merciless fight. By the end of that single day there were at least 6,000 dead, perhaps even twice that number.

All of the Viking leaders were killed, as were all of the cheiftains and important leaders on the Irish side. It is said that Brian Boru was killed as he prayed in his tent, thinking the battle at an end.

The outcome of all this was not peace. The Viking stranglehold on Ireland was broken but the Irish had been rendered leaderless. Those who survived quickly left Dublin and returned to their home territories, where fierce infighting to establish new leadership and new land boundaries would carry on for many years.

Sadly there are really no centres examining in any detail the part of the Vikings in Irish History. Perhaps this will be addressed after the discoveries at Woodstown are excavated.

The National Museum has a permanent exhibition on Viking Ireland at Kildare St in Dublin.

For a little bit of fun – which kids will love – take a trip with Viking Splash Tours in Dublin.

Pre-christian Ireland had a complex and well ordered social structure, and have …