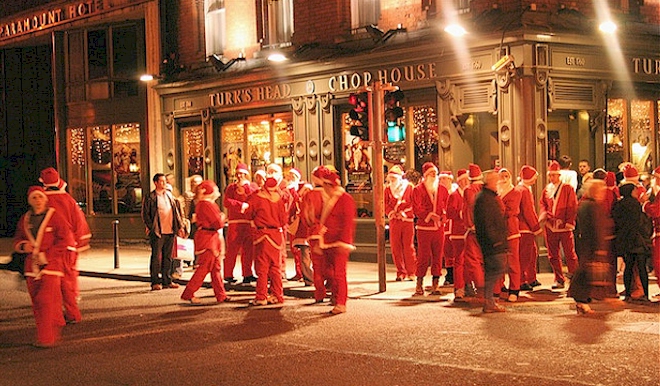 So, what exactly is it like in Ireland at Christmas time?

It is remarkable how often we are asked that question – and the answer is that nowadays it is in many ways not very much different than it is in many other places around the world. There are relatively few customs that could be called uniquely Irish associated with Christmas here.

Preparations for Christmas in Ireland start early.  The Christmas Cake and Plum Pudding, both essential parts of an Irish Christmas, need to be made several weeks in advance, so many people begin their Christmas baking in October.

Christmas cards are exchanged and gifts are given to friends in the days and weeks leading up to the holiday, but those for close family are reserved for Christmas day itself.

As Christmas draws closer almost every office or place of work will hold a Christmas party, often in a local hotel, which are often attended by staff member’s partners also. Since many clubs and sporting organisations, churches and other groups will also have parties, it is a very busy time socially and pubs, restaurants and hotels are packed each night throughout most of December.

Those attending parties don’t always dress like santa however, as the  Christmas revellers in Temple Bar in Dublin, pictured above, did! 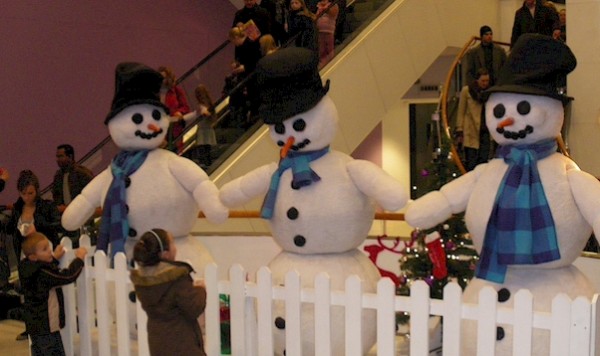 December the 8th, the Feast of the Immaculate Conception, is a Catholic Church holiday and all Catholic Schools – the majority in Ireland – close for the day. The stores however most definitely do not close!

The 8th was the day when people traditionally started serious Christmas shopping and in the past special trains were scheduled to take hordes of shoppers to Dublin for the day. Nowadays it is more likely that people will shop locally, since there are malls and large out of town stores throughout the country, but it is still one of the busiest shopping days in the run up to Christmas.

It marks the beginning of a real frenzy of shopping , just as happens in most other countries. Stores have extended opening hours, some staying open 24hours a day in the last week or two. 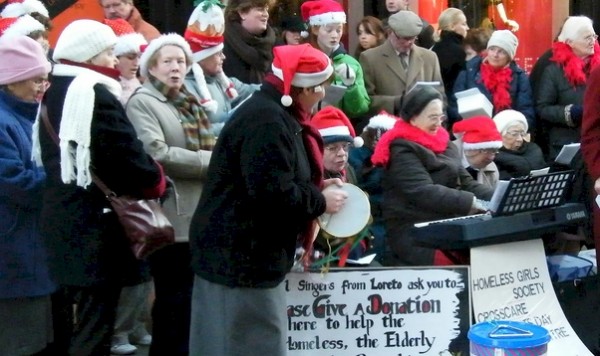 Singing carols on Grafton St by by UggBoy♥UggGirl

Carol singers, usually collecting money for local charities, start to appear on the streets of most towns and cities around this time and there are carol services and concerts held just about everywhere too.

This is a day for last minute shopping and for meeting up with friends and relatives who are home for Christmas. The atmosphere in most town centres is very festive, sociable and relaxed, with people stopping to chat and to wish each other a Happy Christmas. It can take a long time to just go a few yards down a street!

Often people will be home from other parts of Ireland or from abroad just for Christmas and, once the last minute shopping is complete, many of them retire to the pub to meet up with friends they have not seen since last year. 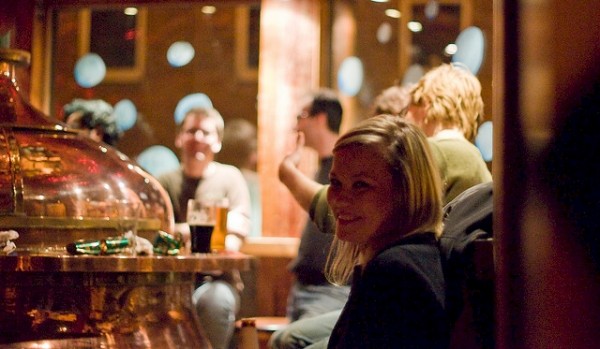 Christmas in the pub by el_floz

Back home some preparations are made for the big dinner the next day, friends may call round to toast the season and even those who never normally light a real fire will have the turf (peat) and wood logs in to set a warm fire in the hearth.

On the night of Christmas Eve children hang up their stockings, usually near the mantlepiece in the living room or close to the tree. They also help to prepare the traditional snack left for Santa to  sustain him on his journey. This may be a few cookies,  a couple of mince pies or a slice of Christmas cake, accompanied quite often by a small glass of whiskey. A carrot or apple for Rudolph is added to the bounty.

It is clear that Santa is greatly appreciative of this snack, since it is invariably all gone by morning!

Early Christmas morning is the time when children discover what Santa Claus has brought – they will have submitted their ‘wish list’ on an earlier visit to see the man himself at a local store.

Once the turkey is in the oven, those family members not directly involved in its progress use the extended cooking time to call to friends, relatives and neighbours to deliver gifts and share a drink or two. Then it is home and time for the big meal. This is eaten in the late afternoon or evening. 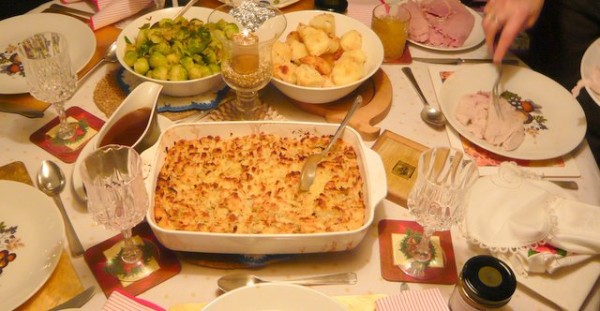 After dinner most people simply flop in front of the fire and the television, to watch the inevitable seasonal movies, reruns and Christmas specials, too full and too exhausted to do anything more energetic!

The day after Christmas day is also a holiday in Ireland, and in some places is celebrated with just as much vigour! The Wren Boys will be out in many places, calling to the door for money, with whole families dressing up and joining in the fun. Other families will head to a horse racing event, visit family or friends or just get out into the country for a long walk. 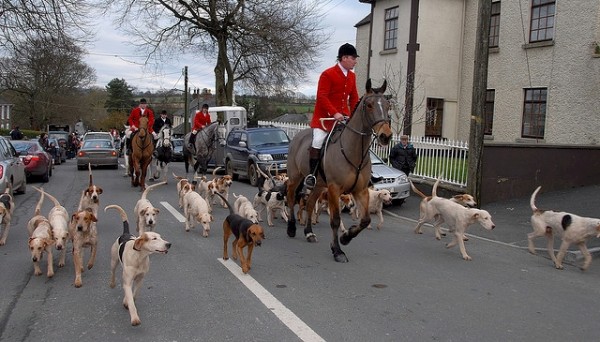 In rural areas large crowds turn out for the annual St Stephen’s Day hunt, which is not just for those on horseback as many follow along on foot.

Few shops open on St Stephen’s day, though some of the larger stores start their sales and are crowded with bargain hunters.

Christmas is a long holiday in Ireland – many businesses remain closed until the first Tuesday of the new year, with others operating on restricted hours or with reduced staff.

Shops are the exception. Once St Stephen’s Day has passed the New Year sales get into full swing and town centres are once again crowded with shoppers eager to find bargains.

The Pantomime season starts after Christmas, with both professional productions in the cities and amateur ones in towns all around Ireland.

I was surprised to learn recently that outside the British Isles, Pantomime is little known, so what is it? It is not that easy to describe, but in spite of its name is anything but silent, most pantomimes are riotous and noisy affairs.

Basically a ‘panto’ is a light hearted show aimed at both adults and children loosely based on a fairy tale – Cinderella, Snow White and Aladdin are popular options. Traditionally some of the female parts, such as the ugly sisters, are played by men and there is lots of singing and dancing. Audience participation is integral to the show and lots of the jokes (the older and cornier the better) are aimed at the children while others with a political or topical twist are aimed at the adults.

The clip below is from an amatuer production of Beauty and the Beast by St. Mary’s Musical Society in Navan, Co Meath and it gives a great taste of what panto is all about.

For many families a trip to the pantomime after Christmas is a much anticipated annual treat.

From St Stephen’s Day on there is horse racing to go to, with a meeting held almost every day, gathering huge crowds to watch national hunt races – where the horses race over hurdles or fences. The biggest horse racing event takes place at Leopardstwon near Dublin

These race meeting are very much family occasions and as much a part of the Christmas season in Ireland as holly.