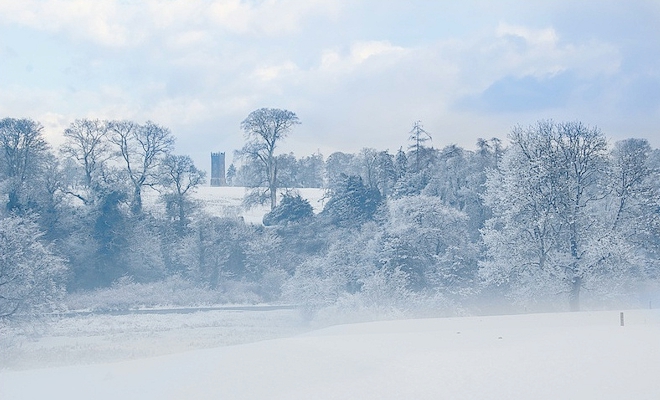 Christmas is a very major holiday in Ireland, with all schools and colleges on holiday for almost three weeks and many businesses closing down completely between Christmas Eve and the start of the New Year.

Most people celebrate Christmas with their families, leading to some of the heaviest traffic of the year on Irish roads in the days leading up to Christmas Day as people make their way home.

Airports and ferry ports are very busy too with many Irish people who work and live abroad returning for the holiday season.

Main image: Tower in the Mist at Carton House, by bbusschots 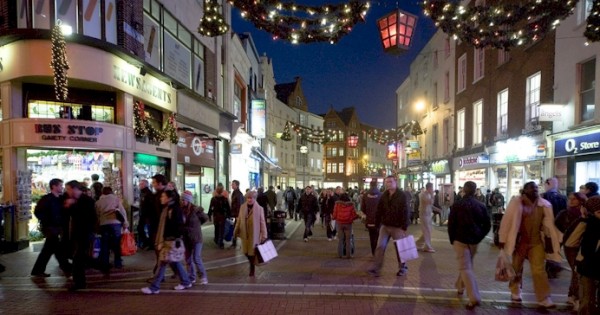 Those who think of Ireland as a place where the commercialisation of Christmas could be avoided may be sorely disappointed – the ‘ker-ching’ of the cash register is at least as typical a Christmas sound as the carol singers on the streets!

The main streets of Ireland’s towns and cities are crammed with shoppers in a frenzy of seasonal buying, which starts officially on December 8th but in reality quite a bit earlier than that.

Most schools are closed on December 8th, and traditionally it was a day when rural families traveled to Dublin to do their Christmas shopping. That is less common nowadays, since most regional towns have much better shopping facilities than in the past.

Most shops, streets and malls make a good effort with lights, decorations and window displays, and there is a very festive feeling about it all, especially as the day draws closer.

In the last 10 or 12 years it’s become a tradition for well known Irish singers and musicians to busk on the streets (well, specifically Grafton Street) on Christmas Eve, while collecting for various charities.

In 2015 those who took part included Bono, Hozier, Kodaline, The Script and Glen Hansard. It can be a bit chaotic, but both the vibe and the music is good. Have a look:

Many of the older Christmas traditions still endure in Ireland, and Christmas remains a time when friends and family get together to celebrate the season with those closest to them. Some of the more widespead and commonly observed traditions, along with some new ones and special Christmas events, are described in this page.