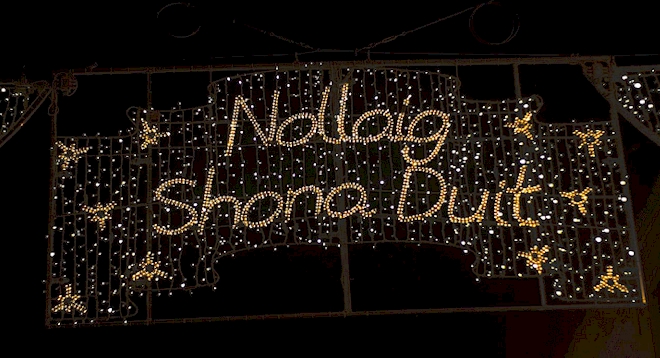 Ireland’s Christmas traditions are not dissimilar to those found in many other parts of the world –  there is lots of shopping, gifts are exchanged, people eat too much and Santa Claus is the main man for most children!

These are some of the most widely practiced traditions surrounding an Irish Christmas, though of course every family will have their own traditions and will celebrate the festive season in their own way.

In the main image above Christmas lights spell out ‘Nollaig Shona Duit’ or ‘Happy Christmas’ in Irish – promounced something like ‘nullag hona gwit’.
Photo by MmMmMmMatt

A Light in the Window 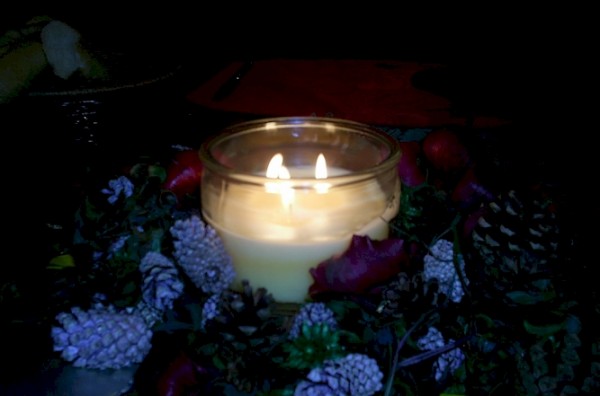 Christmas Candle by Fergal of Claddagh

One old custom that many continue to observe is the placing of a candle in the window on Christmas Eve, a symbol to welcome strangers and to remember those who are far away from home. I am not entirely sure how well strangers dropping by for a visit would actually be welcomed were they to take the symbol literally!

But the little lights shining in windows does give a warm and welcoming feel when walking through a town.

Houses are decorated with natural material such as holly, pine cones and ivy but also glass, wooden or plastic ornaments. Many people place a natural holly wreath on their front doors. Most people will have at least a small crib in the house, with the baby Jesus only placed into the manger on Christmas morning.

Christmas trees for sale in Galway by boocal

Natural Christmas trees, usually Noble Fir, are by far the most popular choice, though fake ones are used. Getting the tree is itself a bit of a tradition, with families having a favourite type of tree and often all going together to chose the perfect specimen. Trees are sometimes bought direct from the growers – in some cases you even get to go out in the woods to choose – but more often from temporary shops set up on vacant lots or by the side of the street in the weeks leading up to Christmas.

Trees are decorated with lights and trinkets, generally the same ones year after year, though some style conscious people create (or buy) a whole new look for their tree annually.

The 8th of December, or around that time, is the usual date for putting up and decorating the tree. 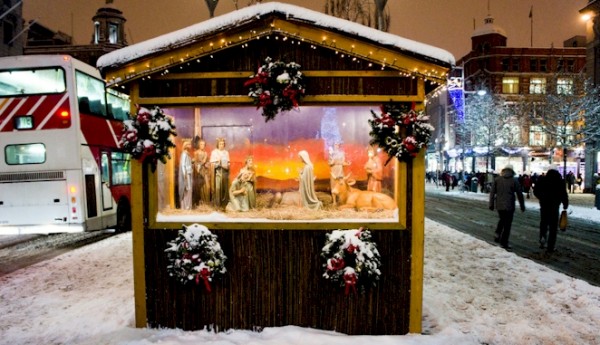 Town centre decorations are erected and lights turned in late November or early December – it seems to get even earlier with each passing year.

Streets are filled with lights, shops vie to have  the most impressive window display and huge trees go up in town squares and shopping centres. Cribs are also erected, some almost life size, in churches, town centres and in shopping malls.

Decorating the outside of houses was a rarity until the turn of this century but has become more common, with some people putting on quite lavish displays of lights. 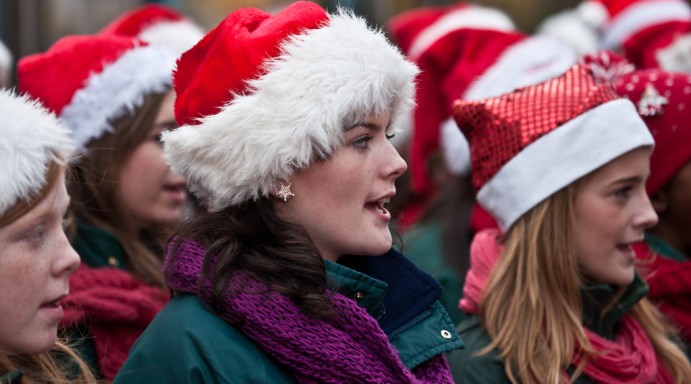 From about the first week in December you can hardly walk up a street or enter a shopping centre in any corner of Ireland without encountering a group of singers belting out Christmas Carols, with varying degrees of skill! Invariably the mood is good though, singers are often dressed for the occasion and they are singing their hearts out for a good cause, so if you are enjoying the entertainment do drop a couple of euro to the collectors.

Pretty much every theatre, concert hall, church and school have Christmas carol concerts too.  Among the most popular in Dublin are the Carols by Candlelight concerts at Christ Church Cathedral, while in Cork the Lord Mayor’s Christmas Concert in City Hall is a perennial favourite. 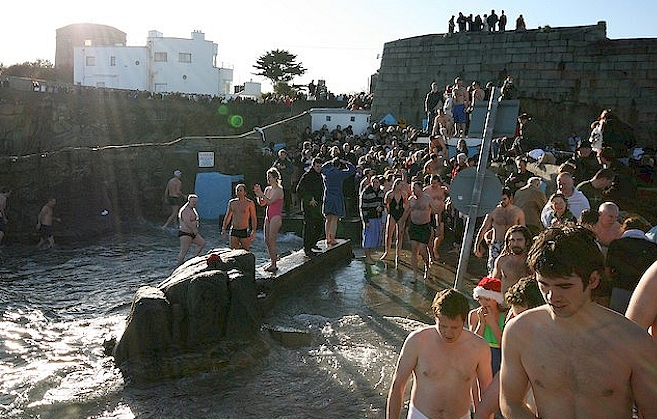 Christmas Swim at Sandycove by fyunkie

There are some intrepid people who get out in the open air and away from all the excess on Christmas morning, though it can be fairly miserable out there at that time of year.

One long standing tradition in Sandycove, a suburb of South Dublin is the Christmas Day Swim – in the sea. Yes, in Ireland, in December, they swim in the freezing Irish sea – and let me tell you it is MUCH colder even that it looks in the picture! Crazy, but they say it’s fun!

Quite a crowd of less brave people – wrapped up in coats, hats and scarves – gather to watch the blue swimmers emerge from the water.

St Stephen’s Day, the day after Christmas, is the day when the Wren Boys come out, mostly in the South of Ireland but also in certain localities elsewhere.

“Hunting the Wren” is an ancient ritual – in its original form a wren was hunted, killed and hung on a holly bush. The wren had, according to legend, earned this cruel punishment by betraying the hiding place of St Stephen, the first martyr, by chattering on the bush where he was hiding. A betrayal which led to the saint being stoned to death.In reality the tradition almost certainly refers back to pagan times, long predating Christianity, and is related to the position of the wren as the king of birds in Celtic Mythology.

This position was supposedly earned when in a contest the tiny wren flew higher than any other bird, a feat managed by the clever wren hitching a ride on an Eagle’s back, and then launching itself and flying high when the Eagle became tired and began to return to land.

Nowadays no birds are killed, instead those engaged in the hunt, the so called ‘wren boys’, dress in straw suits or other costumes (not unlike Halloween costumes) and march through the streets, calling into pubs, house and even local hospitals while beating drums and playing whistles, singing and repeating the rhyme below while asking for “a penny for the wren”.

“The wren, the wren, the king of all birds,
On St. Stephen’s Day was caught in the furze,
Although he is little, his family is great,
I pray you, good landlady, give us a treat.”

(In many parts of Ireland the word ‘treat’ is pronounced to rhyme with ‘great’!)

The result is somewhere between chaos and mayhem, as the video  below, from the Wren Day in Dingle, shows.

The ‘pennies’ collected were in the past used to fund a big party for the wren boys in a local hostelry, where much alcohol was happily consumed. This, along with its probable pagan origins, made the tradition very unpopular with the clergy, and their disapproval, along with mass emigration, was instrumental in the tradition almost dying out in the mid 20th century. It has been revived now though, and since the money collected now goes to local charities, the clergy are much more supportive.

Also known as ‘Women’s Christmas’ or Nollaig na mBan this falls on the 6th of January (the Feast of the Epiphany), and marks the official end of the Christmas season. Traditionally the men of the house take over for the day, preparing meals and allowing the women to have a rest. This tradition has died out a little – personally I am ALL about bringing it back!

Surnames from Ireland beginning with the letter C, from Cahill to Cusack

Christmas is a major event in Ireland, both as a holiday and as an occasion for …