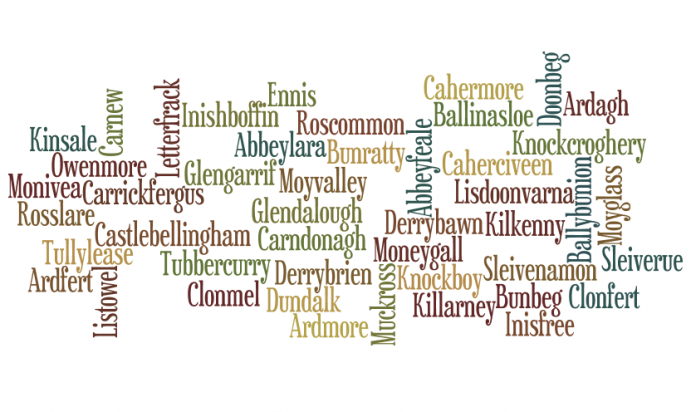 These are guides on this site to help you figure out the meaning of a host of Irish place names. They’ll get you at least close to working out what many places mean, though it’s not in any sense a complete list.

There are many lists of Irish place names and their meanings online. The vast majority are taken verbatim from an 1870 book, Irish Local Names Explained, which is long out of print and free to view or download online. Hilariously, some sites demand that you sign up or even pay to have a look at the list they copied from this FREE, out of copyright book.

It is tremendous book  and a very important one, so if you want your very own copy follow the link to Google Books above and have at it – you can download it as a PDF from there. But I have several problems with the lists generated from it:

Figuring out the real name

Quite often the names of places in Ireland have been only roughly translated from the Irish language and don’t at first seem to have much to tell us. If you can’t figure at least some of it out, look to the Irish version, which will always be more accurate even if harder for an non-Irish speaker to figure out.

Irish sign posts as you enter a town or village will have both versions of the name displayed.

There are occasions when you’ll find the English name of a place is completely unrelated to the Irish one. This mostly arises when an area was renamed by a landlord, who gave it an English name or, more commonly, named it after himself.

Although this renaming may have happened hundreds of years ago, the old Irish name persisted in the locality and the Irish version on the signpost will be the older name.

Most Irish place names are made up of two parts: a prefix (at the start) and a suffix (ending the name). Many start and end parts of Irish place names recur frequently in different names and knowing that allows you to make an educated guess at what any new name you encounter means.

For that reason we have organised these names by their beginning parts the various guides.

However a quick look at the origins of some common place name endings will help too.

Who ruled the place?

Very often the end of a place name is the name of either a saint or a chieftain, or at least someone who owned or ruled the locality. Since names have changed down the centuries and many people’s names were themselves descriptive, it isn’t always possible to know who the person was or to decide whether the name is actually referencing a person.

A suffix that describes the area is common, so if the place is high (-ard),  big (-more) , small (-beg) , in the middle (-lar) or has any other distinguishing feature, it might make its way into the name.

Often the crop or vegetation in an area contributes to its name. So -free at the end of a name can mean heather (fraoigh) and – airne means sloe berries.

If it’s a very fertile area, the name might end in -glas or green, if it’s dark and forbidding, it may end in -dubh or black. Though care is needed, because black can also mean sad or tragic, glas can mean bright or new.

While most names can be figured out, sometime the exact meaning requires without having an authority on the subject beside you can require a bit (or even a lot) of guesswork.

A good example of this is places that start with Kil- or Kill-, which are very common in Ireland. This prefix can either come from ‘coill’ meaning wood, or ‘chill’ meaning church, and there is really no way from the English name of deciding which is which. Often the suffix isn’t much good either – if it’s a name, was it a person’s wood or his church?

So, you just have to figure it out as best you can. These are the kind of puzzles that make deciphering Irish names so much fun!