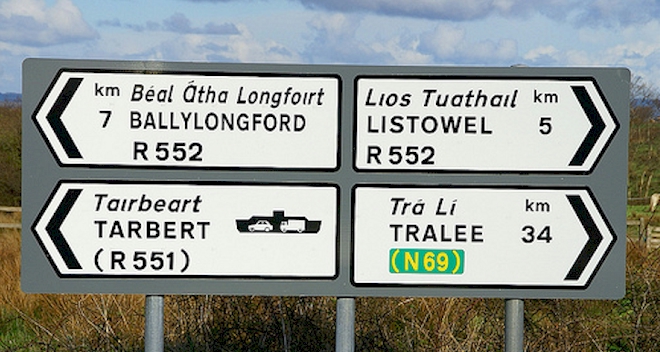 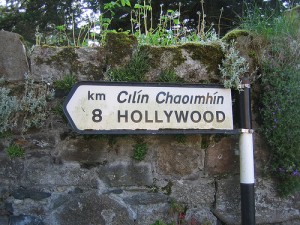 The history of Ireland is written in her place names.

Most have Irish origins, some dating back to pre-Christian and early Christian times. Others are associated with the arrival of the Anglo-Normans and later the English and, especially in the more Northern parts of Ireland, the Scots.

Added to this are a few names of Scandinavian origin, dating from the arrival of the Vikings.

The origin of many of Irish place names can initially be difficult to figure out – how on earth did places come to be called Swords, Inch, Camp, Ovens, Muff and Knock? Others seem unpronounceable – what do you say exactly if you are looking for directions to Graiguenamanagh or Kilmacanogue?

And what about Hollywood?

The Origin of Irish Place Names

Irish is a richly descriptive language so it is not surprising that most Irish place names describe something, for example:

As is evident most places in Ireland have two names, one an English one, the other Irish and in general both names are displayed on signposts and at the approach to towns.

Many places had English names in the past but these have either reverted fully to the original Irish or have been replaced by Irish names, which in turn often have new English versions. Examples include King’s County and Queen’s County (now Offaly and Laois) and Kingstown (now Dún Laoghaire or, in English, Dunleary) and Queenstown (now Cobh or in English Cove).

The name of Ireland’s capital city is interesting as the Irish and English version currently used have different meanings but both are Irish in origin.

Dublin is a phonetic derivation of “Dubh Linn” or “black pool“, while the Irish, “Baile Atha Cliath” means “the town of the ford of the hurdles“.

The intermingling of Irish and English languages in Ireland goes back centuries and this is evident in the commonly used names of places. Most of the names in common usage now are in English, but this is not necessarily any indication of their origin.

Names in common use can be, more or less in order of frequency, derived as below.

1. Names which are an Anglicised version of the Irish

In this case the English versions come from an attempt by the English to pronounce Irish phonetically. Probably the majority of Irish names are in this category.

Clonsilla for example is phonetically very close to the Irish Cluain Silleach, or meadow of willows and Moneyglass is a near miss for Muine Glás, or the Green Grove.

Phonetic pronunciation of Irish can result in some apparently odd names.

How for example did Vinegar Hill, famous for an important battle fought there in 1798, get its name?

Its Irish name is Cnoc Fiodh na gCaor, understandably something of a mouthful for a non native.

The first part, Cnoc, means hill, so that much is a translation. The second part, Fiodh na gCaor, would phonetically sound like fee-na-gare, so that’s where the Vinegar bit comes from. The Irish name actually translates as “Hill of the wood of the berries”, a much more palatable title!

In some names the Irish and English are even more mixed up, a good example being Multyfarnham, in Co Westmeath. The Irish name of Multyfarnham is “Muilte Farannáin” or “Farann’s Mills”, which if used as a phonetic English version would likely be “Multyfarnan“.

The ending -ham is common in English place names (Birmingham, Cheltenham etc) and means ‘village’, but it is has no meaning in Irish. Evidently the ending -nan was replaced by -ham by English settlers who either misheard it or thought it sounded better!

This often succeeded very well, as in Greystones which is a direct translation of Clocha (stones) Liatha (grey) or Fairyhouse from Brú Sí which means just that.

In the case of Roundstone in Connemara the original Irish is Cloch na Ron, which means Stone of the Seals, so really they should have called it Sealstone.

One complication with these names is that it can occasionally be tricky to tell whether a name is an Irish one translated into English or whether the English version in fact came first. Which brings us to …

These names belong mostly to towns which were established by the English. Many are pretty easy to understand – so Castlegregory is obviously a place where someone called Gregory had a castle.

They often incorporate the names of English people or families, so that Newtownstewart is a ‘new town’ established by William Stewart and Eglinton was named for the Duke of Eglinton. Others are descriptive – Westport is a simple statement of where and what the town is.

In most cases the Irish version of these names is a direct translation of the English, so Bennettsbridge becomes Droichead Binead, Irish for Bennett’s Bridge.

In some cases the Irish version seems to deliberately ignore the English connection, as with Villierstown, which was created by and named for the Villiers-Stuart family but was given the simple Irish name of An Baile Nua or the new town.

4. Names whose Irish and English versions are completely different

Many Irish places were given new names by English settlers, who either called them after themselves or named them for the King or other powerful people, presumably in an effort to curry favour.

In some cases these names stuck and became the primary or only version in everyday use, but quite often the original Irish name continued alongside the new one.

Thus Brookeborough, called after English Brooke family, has always been Achadh Lon or field of blackbirds in Irish. Draperstown derives its English name from the presence there of the London Draper’s Company, but its Irish name is Baile na Croise or Town of the Cross.

In some cases where Irish and English versions are completely different from each other, there can to this day be confusion about which is the “correct” name. An example is the town of “Rath Luirc” or Charleville in Co Cork.

The Irish name means “Lorc’s Ringfort” and was in use until the late 1600’s when the town was renamed in honour of King Charles II of England. In the 1920’s when Ireland gained independence the name was officially changed back to the original, and appears as such on maps, in train timetables and so on.

However it is difficult to find anyone in the town who refers to it as anything other than Charleville. If you ask elsewhere in the country where Rath Luirc is, only a very few people will be able to tell you but almost all will know where Charleville is.

5. A few names of Viking origin

There are relatively few Viking names still around, although the Vikings were in much of Ireland throughout the 9th and 10th centuries.

Wexford is from Esker Fjord or Inlet by the Sandbank and Waterford is from Vadre Fjord, or which means a landing place for sheep. Both have completely different Irish names, Loch Garman (Lake of the River Garman) and Port Láirge (bank of the haunch) respectively.

Leixlip is interesting in that it is from leix and hlaup – old Norse for Salmon Leap and the Irish version, Léim na Bhradáin has exactly the same meaning. Which came first? Who knows.

So given all this variety of origin and of language, how can you to make sense of the names of places you visit?

Read on, and consult our Guide to Deciphering Irish Place Names >>