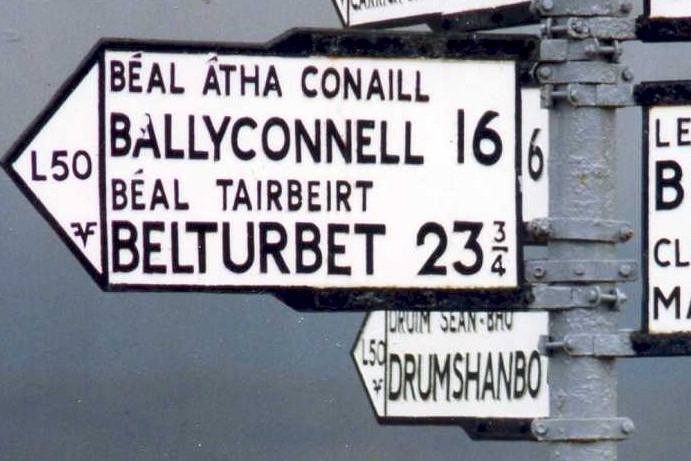 Abbey (Mainistir) means Monastery or Abbey and indicates that the place you are in grew up around a monastic settlement.

Ard simply means ‘high’, so when you encounter a place with Ard at the start of the name you may well be standing on a hill. If you are not, it’s possible the name means ‘high’ in the sense of high status: the High King of Ireland was the Ard Rí.

You’ll also find many place names that end in -ard. For example Clonard means ‘High meadow’. You can guess what Clon- means from that.

Names beginning with Bally- or Ballina-

You’ll find these everywhere, and they can be the cause of much confusion because the Bally- or Ballina- can have one of three different origins:

While these are fairly distinct in Irish, by the time they’ve been translated into English things can get a little mixed up. It often requires local or historical knowledge to sort out the correct meaning. Obviously if there is no town or river mouth it helps narrow it down to a field or place.

Bel comes from the Irish Béal, which usually means opening or mouth, so as you might expect you’ll find these places where a river flows into the sea. However Béal can also mean face or eye, so it can refer to something the town overlooks.

Bun means ‘foot or end’ often referring to the mouth of a river, though it may just mean beside a river. The location of the place is an obvious clue to the meaning.

Although long associated with Ireland, Corned beef is not traditional, the Irish …

In 1170 Ireland was again invaded, by the Normans, led by Strongbow, beginning a …