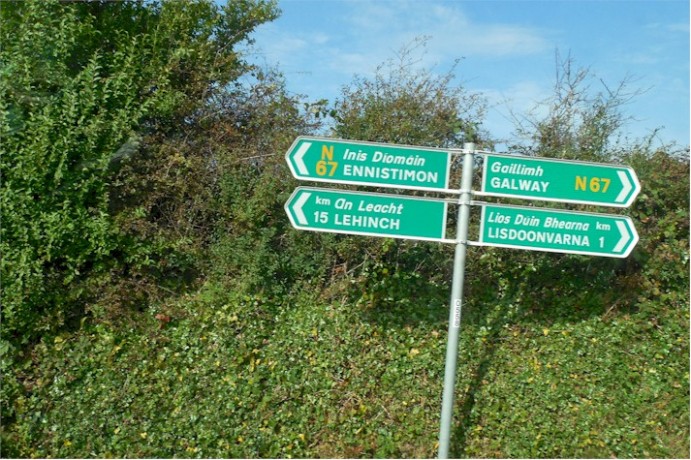 These are uniformly derived from Doire, meaning a wood.

The Kearney’s show up again in Donnycarney, (Kearney’s church) but whether they are the same lot I don’t know.

Names beginning with Doon- or Dun-

Both come from dún, meaning fort. Yes, more forts! So far we have had Caher- and Cashel-, now Dun- and Doon-, with Lis- and Rath- yet to come. There were many of them about in old Ireland and the different words describe different types of fort. Duns were important forts, usually belonging to a king or chieftain.

Names beginning with Donagh- and Donny-

Confusingly names starting Don- are often the same as Dun- (as in Donaraile), but Donagh and Donny- derive from Domhnach meaning “church”. Again they can refer to a person’s church (and most often do) or some characteristic of the church or its location.

Names beginning with Ennis- or -Inis

Ennis or Inis can mean either an island or land by a river. Ennis-, Inish- and Inch- (more often -inch), which all appear in english versions of names, are pretty much the same thing and which meaning applies is easily discerned from the location of the place.

Yes, you’ve guessed it, it means “valley or glen”, from the Irish ‘gleann‘. The second parts of these names are more interesting, because they almost invariably describe the valley.

Glan- usually also means glen, appearing in some names probably because the it is close to the Irish pronunciation of the work Gleann.