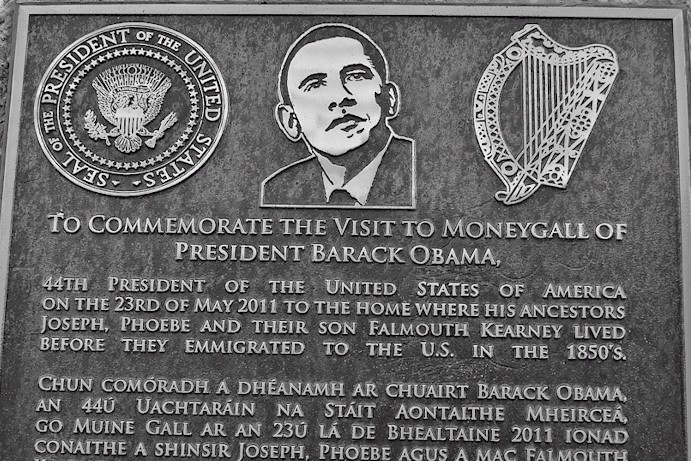 Names beginning with Mon- or Money-

These get their names from muine, meaning a tree grove or bog.

The town officially known as Muine Bheag (Small thicket) in Co Carlow was given that name to replace its original English name at the founding of the Irish state. Previously it was called Bagenaltown, named for Walter Bagenal, an English landowner who founded the town in the 18th century.

In spite of the passage of almost 80 years and the fact the Muine Bheag is the name that appears on maps, signposts, train timetables etc, the town is invariably referred to locally as Bagenelstown. Perhaps if they had come up with a more attractive Irish name it would have caught on.

These names come from ma or magh, meaning plain, flat land. You’ll usually find you’re in an area of excellent farming land when you come upon such a name.

Moy is also often at the end of a name, as in Fermoy (Mainistir Fhearr Maí), “the town of the men of the plain”, and indeed to this day the town serves a hinterland of large farms and well off farmers, and Galmoy (Gabhalmhaigh), “the stony plain” (not such good farming land there maybe).

Muc, muic means pig or pigs. Muck can also be at the end of a name where it means the same thing, as in Rosmuck, the headland of pigs.

Owen comes from abhainn, meaning river and most often is in the name of an actual river. At the start of a word that’s what it invariably means, but at the end it can refer to Owen or Eoghain, a person’s name. Thus Inishowen (Inis Eoghain) does not refer to a river on this lovely island, it translates as “Owen’s Island”. Lucky Owen.