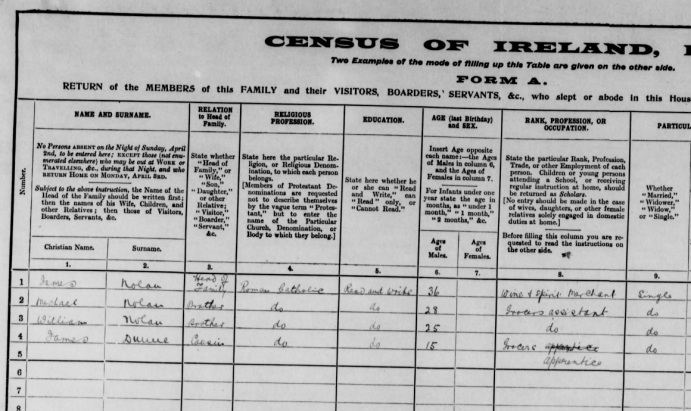 The British Government held a full census in Ireland every 10 years from 1821 to 1911. This should be a rich and valuable research resource, but tragically the fire at the Public Records Office at the Four Courts in Dublin in 1922 destroyed all census returns from 1811 to 1851.

Because of the extent of the loss, the government decided in 1991 that census returns from 1901 and 1911 should be released before the normal 100 year period for which they usually remain secret has elapsed.

Because of the civil war and other political turbulence the next census in Ireland was held in 1926. Records from that census will not be available to the public until 2026.

In a hugely welcome development, the National Archives now has all available census records up to 1911 online and searchable.

Census records were, then as now, completed for every person who passed the night of the census at a given address. For each person the following information is recorded:

The 1911 records also record the number of live births and living children of parents, which makes it a little easier to connect people who may not have been home on the night of the census to their families.

This information is particularly valuable for those cross checking records from other sources, but as most of those undertaking research in Ireland are really looking for information about people who left Ireland before 1901 they are of limited value.

It just makes you sad about all the priceless information that was lost.