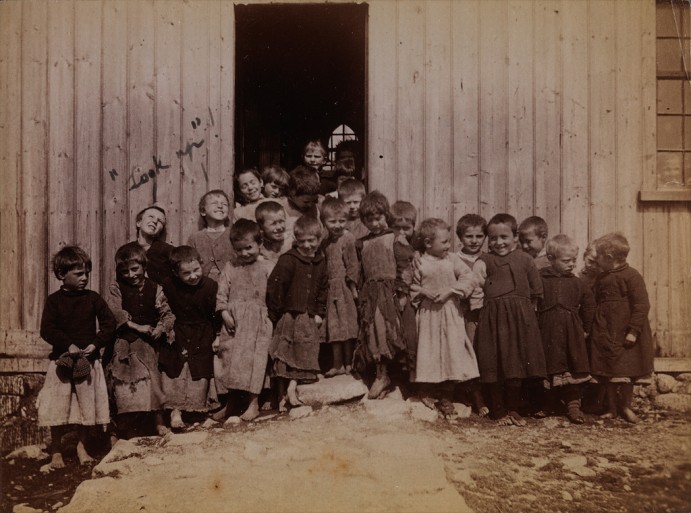 As we go though this topic we will look at some of the issues that might arise when trying to find traces of a (fictional) man called John Mcgee, who we know to have been born in Donegal in the second half of the 19th century.

Irish names can be a nightmare for genealogical researchers, confusing, confused and exasperating. This goes not just for surnames, but for given names too and even for place names.

A quick perusal of our lists of surnames will quickly make it clear that many, if not most, Irish surnames have several alternative versions.

It would be easy to interpret that as meaning that different branches of a family could be distinguished by their use of one or other of these names, but it would be quite wrong. Even a single individual, let alone a family, might have used more than one version and could easily exist in official records under two or more different names.

How did this come about?

It’s primarily because most Irish records of interest to genealogists were either kept by English speaking administrators or written in Latin by Catholic priests but referred to a largely illiterate mainly Irish speaking people.

A recipe for confusion if ever there was one, which caused a lot of potential for things to be altered when they were translated or written down.

A confusion of Surnames

A look at one old Irish surname will illustrate how comfusion can easily arise. The name MacAodh is a very ancient one, meaning ‘son of Aodh’.

The use of the Irish forms of surnames like this one died out in the late 1700s and early 1800s. This was partly because of official suppression of the Irish language but also because many of the people who bore the names could not read or write – they knew how their names sounded, but never wrote or read them. When someone did write them down, they became a different name.

There are a number of ways that records altered names, of which these are the most common.

Unless you are Irish it is unlikely you have much chance of saying ‘MacAodh’ accurately. It is pronounced as two distinct syllables –  mock-ay.

Faced with names that sounded distinctly odd to their Anglophone ears, administrators often just took their best stab at spelling an Irish name phonetically – and it was very rarely accurate. So MacAodhmight be recorded as  MacKay or McCay.

But to make things even more complex, Irish pronunciation can vary significantly from region to region and different administrators could easily make a different interpretation of the same name. So, in the case of MacAodh,depending on what part of the country you were in or who wrote the name down it could also end up as MacKay, MacKee, Magee or MacCoy.

In some case the preferred method was not to use a phonetic version but to attempt a translation of the name into English, which could change it radically.

A common translation of  MacAodh was MacHugh or McHugh, Hugh being the Scottish/English version of the Irish given name Aodh. This might even be further Anglicised, translating the Mac/Mc to ‘son’, giving rise to Hughson or Hewson.

Someone whose name as actually MacAodh could end up with any of almost a dozen different surnames, and might not be consistently recorded in one version across all records.

Given names too were often changed in translation and could have more than one English version. Take the Irish name Eoin. Phonetically it becomes, in English, Owen, but it is often translated as John. The same is true of many other names.

So Eoin MacAodh could end up Owen McKay or John Magee, or even in exceptional cases as John Hughson.

For those researching their family history it is therefore obviously important to first record all possible variations of any names of ancestors that they know.

Having realised that we need to search for various name version and after some work, we find a birth record for an Owen Mcgee born in Millford in 1869 and an entry in the marriage register at Kilmacrenan Church for a John Mcgee of Golan in 1892. In Kilmacrenan churchyard the inscription on a John McGee’s grave shows he died in 1922 aged 55.

Could they be the same man? Probably.

How could it be that the records show that a man was born in Milford, lived in Golan at the time of his marriage and was buried in Kilmacrenan, if in reality he lived in the same house in Donegal for his whole life?

No, it isn’t some arcane riddle, it’s an easy one if you are familiar with Irish land divisions. He was born, lived and died in the townland of Golan, which is in the parish of Kilmacrenan, in the registration district of Milford (or Millford), in County Donegal.

For anyone engaged in genealogical research in Ireland, understanding land divisions in Ireland and the way the various records recorded information is crucial.

Another source of confusion is the tendency for the same Irish place names to exist in many locations. You may think you have a great lead because someone recalls your great-granny telling stories of her mother’s childhood in Kilmore.

Think again – there are well over 50 Kilmores in Ireland! It can be originally have meant either ‘big church’ or ‘big wood’, which isn’t much help either.

Born too Old, Died too Young

Dates in the various records and sources you find may not always cross reference exactly.  There were a number of conditions prevailing in the past that caused these seeming inaccuracies to occur.

It was the law in the late 19th century that all births should be registered within 21 days and if this was not done there were quite significant fines to pay. People who didn’t make it in time neatly side-stepped the issue of the fine by simply telling the registrar that a child had been born just prior to registration, even if in fact they were as much as two or three years old.

That’s if they bothered to register them at all. As many as 10% of Births (and indeed marriages and deaths) were not registered at all, which causes tremendous frustration for researchers unable to track down a full record history for their ancestor.

Also ages were sometime stated rather casually. In 19th century Ireland most people were little concerned with accurate age – the passing of the years was not marked by parties or birthday celebrations. Many people did not know the exact date of their birth or even the year. When asked their age they just made a general estimation of how old they might be.

Many gravestone will record the age of the deceased but not their date of birth. This age should usually be thought of as approximate.

Untangling the Web of Confusion

Faced with a situation like this, how does someone researching an Irish ancestor make sense of it all?

The answer is by cross referencing. Record everything you find that might be relevant, even if names seem a bit different or dates a little off. The more material you have to check subsequent records against, the more the pieces of the puzzle will begin to come together.

In John Mcgee’s case by cross referencing what we know and looking at all the full records available, it will be easy enough to sort out the confusion. Cross referencing is the key to all genealogical research – individual records in isolation tell you very little.

Look at where the information we have already mentioned above about John came from:

In reality, it is unlikely that you would have just this particular set of information – this list of records that may have information about John shows just how much more may be available.

Straight away you could probably add a babtismal record – which if it exists could give a more accurate date than the birth record, as even those who were tardy about registering a birth would have a child babtised fairly promptly after birth. Add the records of other family members, of children of the marriage, of John’s wife and her family and a much more accurate and vivid picture will start to emerge.

You are on the road to finding John.

Have you something to add about "Making Sense of Names, Places and Dates"?