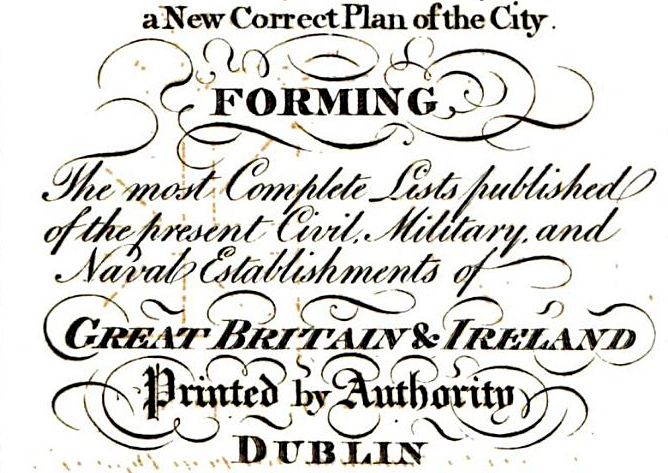 These can provide useful information for people who were active in trade or who worked for government agencies. Unfortunately they are at best patchily available in the form of extracts online, but copies can be often be consulted at both the National Archives and the National Library.

In 1736 the first copy of The Gentleman’s and Citizen’s Almanack appeared, and from 1751 it included a trade directory for Dublin. In 1787 the English Court Registry was added and the publication became known as The Treble Almanack. It continued to be published until 1837.

The various version contain alphabetical lists of merchants and traders in Dublin and lists which variously included officers of the city guilds, officers of Trinity College, state officials, medical and legal officers/administrators and Church of Ireland clergy. Some issues include lists of nobility and gentry, ship’s captains, military, pawnbrokers and other categories, but they are not consistently included.

» The 1832 edition is available to read on line or download as a PDF at Google Books.

This began publication in 1834 and continued until 1849. In addition to similar information to the Treble Almanack it also included a street by street list of the occupants of houses. It also included officers of clubs and societies and lists of clergy of various religions.

While again primarily concentrated on Dublin, this almanac did include some information about administrators of larger towns around Ireland.

Thom’s, a street and commercial directory similar to Pettigrew and Oultons, was first published in 1844 and is still published annually today, with recent editions accessible online for a fee. Unfortunately archived copies are not available in this way.

First published in 1820, Pigot’s directory covers all the main towns in Ireland, listing the names of nobility, gentry and traders for each. This was not an annual publication, issues were released sporadically, each with more towns and villages included than the last, until 1894. The later ones are known as Slater’s Directories.

Many lists, registries and directories specific to occupations from Blacksmiths to Railwaymen, Lawyers to Circus performers still exist. An extensive list of the available records, including links to those that are online, is available at The Irish Times Ancestry pages

Have you something to add about "Trade & Occupational Records"?