Home » Ireland & the Irish » Sport in Ireland » Soccer in Ireland

Soccer came to Ireland thanks to John M. McAlery, a Belfast merchant, who saw the game played while on honeymoon in Scotland and introduced it to Ireland in 1878. In the early years it was mostly played in Northern Ireland but from 1885 it spread to Dublin and from there throughout the entire country.

Soccer is played throughout the country at an amateur level and is particularly strong in larger towns and cities.

While there is still competition for players between Soccer, Rugby and Gealic Football, especially at junior level, its nothing like the animosity that existed in the past.

For many years the GAA, administrators of Gealic football and hurling, classified soccer and Rugby as a ‘foreign games’ or ‘garrison games’. This applied to any sport that was associated with the English occupation of Ireland and so included cricket and hockey also.

Members of the GAA, which included all those who played any of the games administered by the organisation, were not only forbidden to play soccer, even just at a casual or non competitive level, they were subject to permanent expulsion from the GAA for even attending a soccer match as a spectator.

The ban was lifted in 1971, and many people how play and support both soccer and GAA games, however there is little doubt that its existence prevented soccer from taking as strong a hold in Ireland as it did in other European countries.

The Irish league is semi-professional and while popular rarely attracts crowds as large as those which attend inter-county Gaelic Football matches. Most clubs in the league stuggle to survive financially and players are not as highly paid as in other European leagues.

As a result lmost all of Ireland’s better players and all of its international team, play with English professional clubs, where earnings are high much higher. Interest in and support for teams in the English league is enormous, many Irish fans travel to the UK regularly to watch their favourite teams play.

If you ask an Irish child (or adult) what soccer team they support, they are far more likely to name an English team than one in the Irish league. 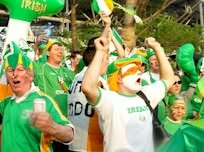 That chant was ubiquitous throughout the late 1980s and 1990s, something of a golden period for Irish Soccer supporters who gained an international reputation for high spirits and exuberant support of their team.

The Republic of Ireland team, under the management of Jack Charlton, qualified to play in the European Championships in Germany in 1988, their first time ever to appear in the finals of a major international competition.

Ireland then qualified for 1990 World Cup in Italy and progressed as far as the quarter finals only to be beaten by the host county. 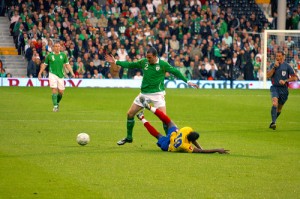 In 1994 the World Cup was in the USA, and Ireland once again made it to the finals, getting glorious revenge after 4 years by beating the Italians in their opening game.

In 2002, this time with Mick McCarthy at the helm, Ireland once again reached the World Cup finals, this time in Seoul, but went out in the second round.

For a country which until 1988 had never qualified for a major final, this run of qualifications is in itself a fantastic achievement and one which is hopefully a good foundation for even more future success.

Where to see Soccer in Ireland

Soccer is primarily played in the winter, so there are not that many matches during the peak tourist season. If you would like to attend a match, watch for posters locally, ask around, check the local press or take a look at the Football Association links above for fixtures lists.

Proportional Representation: How it Works

Proportional representation, the method of voting in Ireland, can easily confuse …

Irish towns have changed a lot in the last century, but in some ways they've …